Bad news for southern Europe. It looks like coronavirus will further entrench the European Unionâs long-standing disparities between north and south.

According to the European Commissionâs estimates, the economies of Italy, Spain, and Greece will all shrink over 9%. By comparison, the EU average is 7.4%. France will shrink 8.2%, while most Nordic/Germanic countries will shrink less than 6.5% (thatâs Germany, the Sweden, Denmark, Austria, Finland).

In terms of jobs and debt reduction, all of the hard-won gains of the past five years or so have been annihilated. Nominal GDP per capita (in euros) in selected European countries (source: Eurostat). Italy and Greece never recovered the standards of living of the early 2000s. Note France and Germany decoupling since 2010. Unemployment (%) in selected European countries (source: Eurostat). Southern European countries never recovered from the 2010 eurozone crisis. Notice that Franceâs performance has been noticeably worse than Germanyâs and Britainâs since then as well.

Macroeconomically, France is now effectively part of southern Europe. From around 1965 to 2000, France was, uncharacteristically, significantly richer than Britain. In the 90s, France was about as rich as Germany, which was then hobbled by the annexation of formerly communist eastern Germany. Today, not having its own currency (unlike Britain) and having an enormous welfare and overregulated labor market (relative to Germany), there is no denying that France is falling behind.

Even before the COVID recession, southern Europe was barely on track for slowly growing out of debt. Now these hopes are completely dashed.

The economic disparities between northern and southern Europe â which have been manifest at least since the late nineteenth century and particularly since the Second World War â are going to become deeply entrenched.

This is part of the reason that I am skeptical of short or even medium term race war scenarios in Western Europe. The fact is that the most diverse and, most often, zealously diversitarian parts of the Western world â Germany, the Netherlands, the Nordic countries, Great Britain, the United States, and the former White Dominions, mostly of north-west European and Germanic background â continue to be more economically dynamic.

Northern Europe and its colonial offshoots continue to be better at creating economic wealth â despite being hobbled by African, Islamic, and Hispanic minority populations which represent an economic drag relative to the natives â than comparatively homogeneous southern European nations and their colonial offshoots (namely the Whitish nations of Argentina and Chile, which have a fair amount of Amerindian blood).

In the 90s and early 2000s, the European Union could still confidently hope that, despite considerable inequalities, its nations would gradually converge to the same standard of living and level of development.

These hopes were encouraged by peculiarly Boomer assumptions: that wealth grows on trees and everyone is equal. When the euro common currency was created in 1999-2002, the European Central Bank declared that the public debt of southern European countries was just as credit-worthy as that of Germany and investments in them were effectively be subsidized. German and, especially, French banks jumped at the opportunity make massive investments in southern Europe, leading in particular to a hypertrophied public sector in Greece and a huge property bubble in Spain. The bubble burst circa 2010.

All this has great political ramifications. The scale of the economic disaster in southern Europe is presumably why German Chancellor Angela Merkel agreed to a remarkable doubling of the EU budget by â¬500 billion over the next three years, raising EU loans to fund transfers to countries hit by coronavirus, particularly southern Europe.

This improvized quasi-federal scheme is quite unprecedented, in terms of speed and scale, in EU history. As Jean Quatremer observes, given that the new budget would be financed by relatively painless loans, European leaders may have strong incentives to resort again to such plans in order to find the concluding fudge during their interminable summit negotiations.

Significantly, it appears that the German establishment â not counting the German Constitutional Court â has basically accepted the ECBâs adoption of Anglo-style mass lending to shore up the economy. If continued indefinitely, this will presumably prevent a 2010-11-style financial panic in southern Europe, but this has controversial redistributionary and inflationary implications in the medium term.

Today, even not accounting for highly-fertile immigrants, northern Europeâs fertility seems to be somewhat higher than that of southern and eastern Europe, I suspect because (potential) parents enjoy superior childcare/welfare services and higher/more secure incomes in northern Europe. 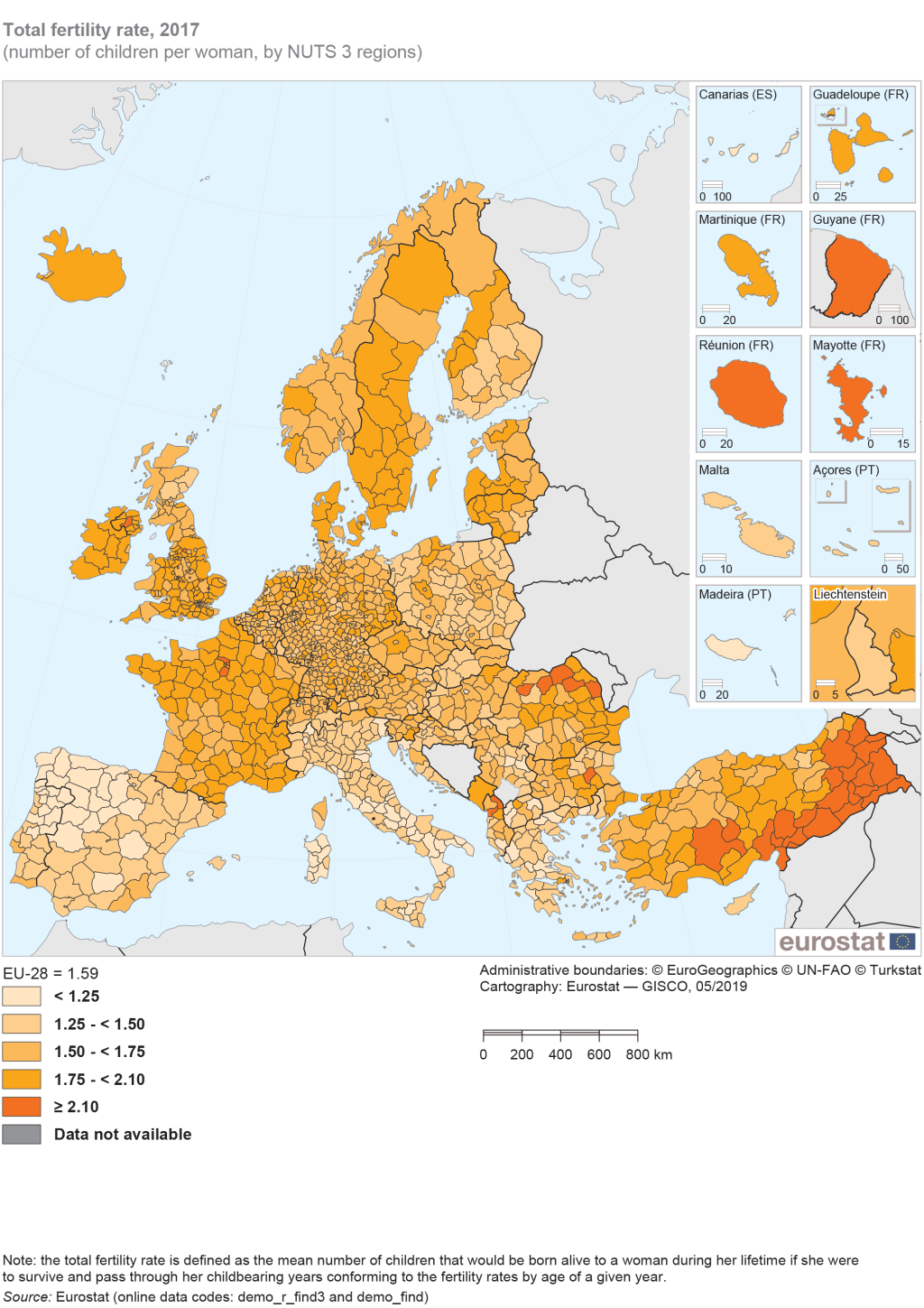 If southern Europe does not recover economically, we can expect continued depopulation as their fertility rates remain depressed and their more enterprising youth, particularly the educated, head north. These nationsâ financial and political dependence on the north will grow. North-European economies will of course benefit from the inflow of southern European immigrants, partly counteracting the effects of Afro-Islamic immigration.

Politically, we have fertile ground for instability. The Macron rÃ©gime is already barely able to keep the more uppity elements of the (neo-)French population â whether white gilets-jaunes or Afro-Islamic BLM marchers â at bay.

Italy looks to be on the verge of explosion. Both the political establishment and the people at large are becoming anti-EU. The inchoate populist-leftoid Five-Sar Movement has collapsed. Matteo Salviniâs nationalist Lega is being outflanked . . . by the even more nationalist Brothers of Italy.

Imagine that the euro-globalist establishment in these countries will now have to manage these pressures with additional grinding years of mass unemployment and belt-tightening. Italy has strong prospects for decisively flipping to a national-populist regime in the coming years and joining the ranks of VisegrÃ¡d. (I am less optimistic for France.)

In the long run, I am talking 30-40 years, we can expect that northern Europe will become so dysfunctional that people prefer living in southern or eastern Europe. Non-Whites currently make up around 20% of the north-west European population. When this rises to 40 or 50%, we can expect the situation to get very unstable indeed.

Hopefully, by then , the southern and eastern Europeans will have taken note of their brethrenâs mistakes and start taking the necessary measures. I mean the adoption of enlightened biopolitics: the preservation their ethno-national identities (accepting only assimilable immigrants, including fellow Europeans) and systematic policies to ensure their nations reproduce and, more than that, do so with a view to improving genetic and phenotypic quality. European nations will be so marginal in the world by then that we will really have no room for yet more excuses, delusions, and half-measures.