Just a normal day in Dijon, France (where you get your mustard).
◄►Bookmark◄❌►▲ ▼Toggle AllToC▲▼Add to LibraryRemove from Library • BShow CommentNext New CommentNext New ReplyRead More
ReplyAgree/Disagree/Etc. More... This Commenter This Thread Hide Thread Display All Comments
AgreeDisagreeThanksLOLTroll
These buttons register your public Agreement, Disagreement, Thanks, LOL, or Troll with the selected comment. They are ONLY available to recent, frequent commenters who have saved their Name+Email using the 'Remember My Information' checkbox, and may also ONLY be used three times during any eight hour period.
Ignore Commenter Follow Commenter
Search Text Case Sensitive  Exact Words  Include Comments
List of Bookmarks

We are living in kooky times.

The EU lawmakers cite the fact that:

[I]n the US, black people and people of colour constitute up to 40 % of the incarcerated population, while they represent 13 % of the total population; whereas the rate of mortality in police custody in the US is six times higher for black people than for white people and is three times higher for Hispanic people, as is the use of excessive or lethal force, which has disproportionately affected people of colour . . .

Apparently none of the 400+ elected officials who voted for this have heard of FBI crime statistics, which show that black and Hispanics commit violent crimes at roughly the same proportion as the figures mentioned above. In Europe, one finds more and more the same dumb American memes.

Identity & Democracy, the nationalist group in the EU Parliament, tabled its own resolution denouncing antifa, the practice of kneeling, âthe iconoclastic and sectarian drift of progressivism, which is reminiscent of the Taliban,â and the deafening silence surrounding the mass murders of Christians in Nigeria and White farmers in South Africa. This text has no hope of passing but has the merit of showing that not all Europeans are complicit in their suicide.

American liberal elites are radicalizing to a truly frightening degree. The attacks against George Washington and Ulysses S. Grant are a sign that now, for the first time, the very foundations of the American nation are being explicitly attacked. America is no longer considered a tragically flawed experiment on the path to redemption, but an intrinsically evil nation which must be wholly upturned.

European governments, while sympathetic to BLM, have in fact tried to prevent the chaos from spreading to our shores. Both British Prime Minister Boris Johnson and French President Emmanuel Macron have affirmed that historical statues must not be taken down in their nations.

Statues of Winston Churchill and Charles de Gaulle, those heroes of the Second World War, have been vandalized. But so far, there has been no mass elimination of statues, with the exception of those of Leopold II of Belgium. That king, who is now condemned for his colonial enterprise in the Congo, has no nation to protect him.

In passing, I note that Leopold IIâs Congo embodies everything wrong with European colonialism: a (pseudo-)humanitarian enterprise driven by capitalistic motives (above all the desire for rubber). No one cares that Leopold II exterminated the Arab slave trade which was still thriving in eastern Congo. No one cares that Belgian colonialism spread basic sanitation and health across that vast territory the size of Western Europe.

Actually, thereâs a Monument to the Belgian Pioneers in the Congo in Brussels which was setup just shy of 100 years ago. The Monument is a triumph of colonial propaganda, showing the hapless natives being brought to Christianity and into the loving arms of Mother Belgium. On the left is a statue of a Belgian soldier with his foot on a Caucasian manâs face. Written underneath: âBelgian military heroism annihilates the slaver.â

What is the missing word, you ask? âArab,â which has been chipped out by someone, probably an Arab. Iâm not just saying that gratuitously: the Monument is, tellingly, placed right next to the Great Mosque of Brussels.

People claim Leopold II killed 15 million Congolese. Given that Leopoldâs agents in the Congo numbered in the hundreds, this would entail a genuinely superhuman efficiency on the part of the Belgians. In the meantime, thanks to the aforesaid gifts of Belgian health and sanitation, Congoâs population has risen from 12 million in 1950 to an estimated 101 million today!

Everything is fine except that you are racist. 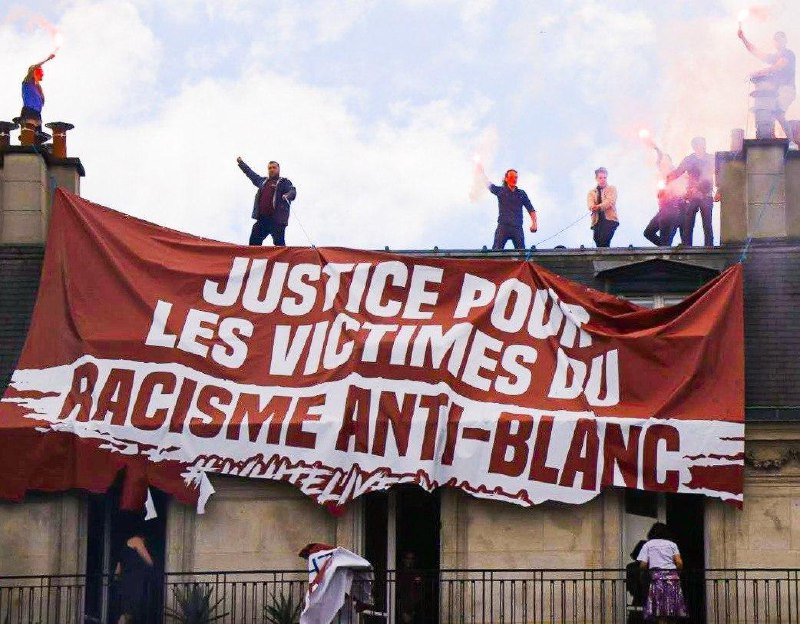 Anyway, there have been protests and rioting here and there across Europe, including in France. Actually, in France identitarians gatecrashed the BLM protest by flying a #WhiteLivesMatter banner calling for âJustice for the Victims of Anti-White Racism.â Similarly, right-wing counter-protesters protecting the statues have been stronger, particularly in Britain.

In Dijon, the whole world has been amazed by fighting and heavy weapons used in clashes between Chechens and Arabs. Law enforcement fled and the State was powerless. The affair has been solved by a deal sealed between Chechen and Arab representatives in the local mosque. A first manifestation of White Shariah.

The streets of Stuttgart have descended into chaos as various POCs loot things.

Understand that our stupid world is going to get more stupid. Thereâs really no telling how low we can go. Inequality is a truth too uncomfortable for our comfy postwar Whites to accept. Protect yourself in the meantime and pray for renewal.