A few days ago I received this warning message from Twitter:

Your account, @GiladAtzmon has been locked for violating the Twitter Rules. I was accused by this anti social network of âviolatingâ their ârules against hateful conduct.â

The message took me by surprise as hatred is foreign to me. In fact, I dedicate a considerable amount of my energy to exposing the racism, racial supremacy and biological determinism that are found in many identitarian discourses.

Twitter wrote to me âYou may not promote violence against, threaten, or harass other people on the basis of race, ethnicity, national origin, sexual orientation, gender, gender identity, religious affiliation, age, disability, or serious disease.â

_What can Jews do about #Antisemitism? Simple– look in the mirror– introspect. #Palestine #Zionism #Israel #BDS 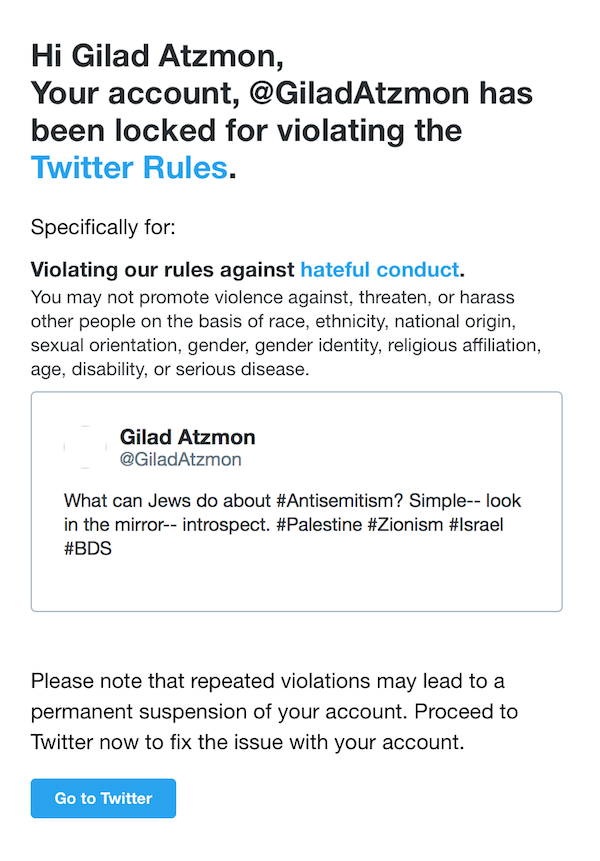 It seems that Twitter considers it âhatefulâ to ask people to âlook in the mirrorâ, to âintrospect,â to consider the âremoteâ possibility that maybe some of the Jewish Stateâs policies and practices may reflect badly on the Jews as a whole. I would like Twitter to explain to us how calling on people to âintrospectâ âpromotes violenceâ or âthreaten[s] or harass[es] people on the basis of race?â

Twitter must have known that I didnât commit any âhateful speechâ and offered me the chance to erase my 5 year old tweet that no one except my devoted Zionist stalkers would notice and who managed to pinpoint four other âhatefulâ statements by me.

I suggest instead of referring to the Swastika we just call it ‘Star of Adolf,’ it sounds friendly and it puts David’s in contextâ¦â

I accept that some Jews are upset by my dark cynicism, but considering the disastrous crimes that are committed by the country that decorates its tanks and airplanes with Stars of David, this is another call for Jews to introspect, to look in the mirror, to self-reflect. It by no means âpromotes violenceâ, âthreatensâ, or âharassesâ anyone. If anything it replicates the early Zionist insight which I agree with, that before anything else, Jews must first find their way to become âpeople like all other people.â

Twitter also asked me to remove this exchange with an ardent Zionist:

@Saul_Freeman because the real holocaust is what you People do to Palestinians.â

I donât intend to bore you with each statement Twitter finds hateful. It doesnât take much to figure out that Twitter was subjected to a Zionist blitz aimed at silencing me. To some extent it was reassuring that my detractors couldnât find a single remotely hateful statement in my entire Twitter oeuvre. And it was amusing to see how upset this caricature Zionist was to find out that my Twitter account was still active.

Hi @twitter @TwitterSupport @jack if you agree that @GiladAtzmonâs twitter violates your rules on hateful conduct (months after I reported him to you) could you please explain why his account is still active on your platform? Why are you not removing his account? pic.twitter.com/BDeZKDd0MG

What is clear to a growing number of people, perhaps most Westerners, is that Twitter, like FB and Google are not what they initially promised to be. It took little time for these internet platforms to morph into authoritarian and draconian thought police. If there was an initial promise to emancipate us through the internet, it is gone, the internet giants have become the most rigid oppressive and totalitarian forces leading us into the next dark age.

The chutzpah, and I indeed deliberately use the Yiddish word in this context, exceeds former totalitarian oppressive measures. This time it is not our rulers, tyrants or monarchs who make us fearful of our own thoughts. It is not political parties who make us walk on our tiptoes. In 2020 Internet companies even suspend the activity of democratically elected leaders if they donât fit with the Zuckerberg agenda or Twitterâs âprogressiveâ goals. In 2020 Zuckerberg and a few of Googleâs directors decide what scientists are allowed to say about Covid 19. In August 2020 the internet giants claimed to know what eradicated Beirut before even the Pentagon or the Lebanese produced an explanation.

Once again I find myself reiterating that the Tyranny of Correctness is at the very heart of the Jerusalemite ethos. While Athens introduces us to philosophy, science, logos, beauty â Jerusalem, is considered the city of revelation, is all about obedience. In Jerusalem, we follow mitzvoth and commandments. In Jerusalem, ethics (the making of moral judgments) is replaced by rules that dictate an image of morality. Jerusalem decrees what we can say, Athens teaches us how to think for ourselves.

The USA was born as an Athenian realm. It was the Land of the Free, not because it has ever been free, but because it was inspired by the notion of freedom. Not much is left out of this aspiration. America, like Britain, France and other Western countries is now a Jerusalemite colony, its regime of correctness is defined by foreign sensitivities.

For the West to stop its rapid decline, it must – and right now, before it is too late, to reinstate its fidelity to the Athenian creed. If the West wants to survive, it must ensure that it isnât a Zuckerberg, in whatever form, who defines the boundaries of the Covid-19 debate. It should not be Youtube that decides which doctors and scientists are kosher enough to deserve airtime.

For us to have a prospect of hope, Jerusalem must be reduced into its natural magnitude. The Zionists who are upset by such thoughts should bear in mind that Zionism succeeded in achieving its early objectives because its Zionist founders rejected Jerusalem. Their aim was to make Zion into an Athenian province. Their mission ultimately failed, but not before it inspired some Jews to believe in the possibility of a metamorphosis. Facebook Censorship: White Supremacy of the Most Hypocritical Type
Michael Hoffman
• 180 Comments • Reply
← The Unconscious Is Wileyâs DiscourseGilad Atzmon on Adam Green's Know More ... →
Hide 71 CommentsLeave a Comment
"The Open Society and Its Giant Enemies"
• 71 Comments
Commenters to Ignore
Commenters to ignore (one per line)