Are the young Brits and Americans who genuinely feel guilty about the colonial and racist crimes of their white ancestors also willing to be subject to a special whites-only tax allocating a significant portion of their incomes to Black organizations so justice can, finally, prevail? Will these young White revolutionary spirits support, for instance, a bill that prevents White people (including their parents of course) from passing their wealth to their offspring so justice can be done and Black people can be compensated for centuries of racist abuse? I really am trying to figure out the true meaning of âWhite guilt,â does it carry personal consequences?

Since the history of the British Empireâs criminality is vast, I find myself wondering whether our guilt-ridden revolutionary youngsters also feel responsible for the situation in Palestine? Are they going to push the British Government to put to an end to its ties with Israel until justice is restored in Palestine and the indigenous people of the land are invited to return to their villages and cities? Are those young British anti racists willing to come forward and apologise to the people of Pakistan or Ireland? And what about the people of Dresden? In short, I would like to know what, exactly, are the boundaries of this British post-colonial âethical awakeningâ?

I wonder whether those who insist upon toppling Churchillâs monuments are willing to accept the possibility that David Irving might have been right all along in his reading of the British leader?

Since the Left has fought an intensive and relentless battle against the notion of âhistorical revisionism,â I wonder whether those who currently insist upon âsetting the record straightâ understand that what they do de facto is revise the past. Is it possible that the Left has finally accepted that revisionism is the true meaning of historical thinking?

Finally, are the youngsters who adhere to left and progressive values and insist upon a better, more diverse and anti racist future willing to admit that there are a few Black slaves under the monopoly board? I ask because to date, not one Left or Progressive voice has come forward to state that this Mural is all about Black slavery and capitalists. 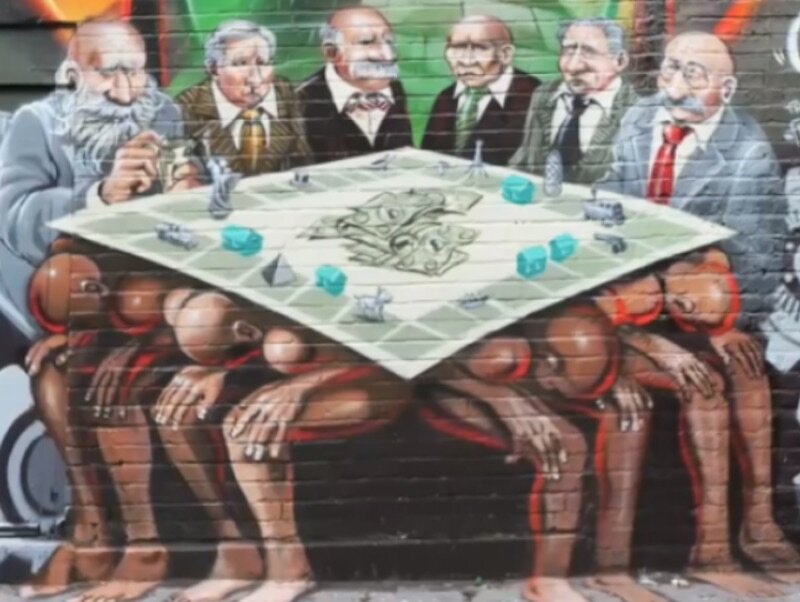 The 1619 Project Devours Its Liberal Parents
Robert Hampton
• 171 Comments • Reply
← The Anti Slavery Mural Is Back, Hopeful...Jewish Identity Politics and the Curren... →
Hide 68 CommentsLeave a Comment
"Questions to Do with Erasing the History of Slavery and Colonial Abuse"
• 68 Comments
Commenters to Ignore
Commenters to ignore (one per line)

← The Anti Slavery Mural Is Back, Hopeful...Jewish Identity Politics and the Curren... →
Current Commenter
says:
Current Date at Time Now
Leave a Reply - Comments on articles more than two weeks old will be judged much more strictly on quality and tone
Cancel Reply
Commenting Disabled While in Translation Mode