Penguin announced this week that in response to claims of âantisemitismâ it has stopped printing Col. Pedro BaÃ±osâ best selling book, âHow They Rule the World.â 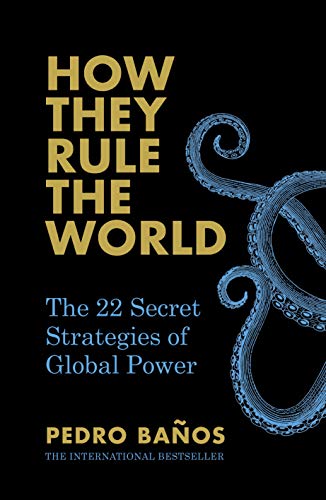 The scandal erupted when it was revealed that passages in the original Spanish edition of the book related to the Rothschild dynasty were omitted from the Penguin Random House English translation. The meaning of this deletion is in itself devastating. It suggests that Penguin attempted to kosherize a book by editing and deleting sections so it would not offend Jewish sensitivities.

The publisher initially rejected allegations that the book which claims to reveal âthe 22 secret strategies of global power,â is antisemitic. But after continued pressure from various organisations including the Campaign Against Antisemitism, Penguin commissioned an âexternal reviewâ led by Rabbi Julia Neuberger.

The Jewish Chronicle (JC) ârevealsâ that Col. BaÃ±osâ original Spanish edition makes several references to the Rothschild family, including a passage accusing the banking family of holding âgiganticâ economic power and influence which has âled to multiple speculations about their capacity to intervene in key global decisionsâ. Needless to say, this an historical description of the family and its role in history.

The hypocrisy displayed here by the Jewish media and pressure groups is mind blowing. Jews, themselves, do not hide their pride and admiration for the Rothschild Dynasty and its global political power. In the following video you can watch a Zionist bragging about the Balfour declaration that âchanged the course of historyâ and the power and influence the Rothschild family exercised behind the scenes.

Most English speakers are familiar with the musical, Fiddler on the Roof, but not many Brits or Americans are aware that in Hebrew and in Yiddish the musicalâs greatest hit âIf I were a Rich Manâ is sung âIf I were a Rothschild.â In the following video you can listen to âIf I Were a Rothschildâ (in Yiddish) while viewing the many estates of this influential family.

Penguin initially argued that while the book âclearly expresses robust opinions,â it was not anti-Semitic. However, persistent pressure from Jewish organisations led the publishing giant to commission a Rabbi to review the book. It came as no surprise that Rabbi Neuberger with the aid of two Spanish âantisemitism experts,â reached the conclusion that the Spanish edition contains âechoes of Jewish conspiracy theories.â The phrase âJewish conspiracy theoriesâ is confusing. It basically applies to events in the past which reflect badly on Jews in the present. It is there to suppress free discussion. Jewish power as I define it, is the power to silence criticism of Jewish power. Penguin Random House shamelessly succumbed to precisely this power last week.

In an attempt to justify his companyâs decision, Penguinâs chief executive declared that âPenguin Random House UK publishes for readers of all backgrounds, faiths and nationalities.â

One may wonder what Penguinâs next move will be. Is the compromised publishing house going to remove George Orwell from its catalogue because some Jews insist that deep inside, Orwell was a vile âanti-Semiteâ? Maybe Penguin should provide us with the list of titles that are fit for âall backgrounds, faiths and nationalities.â Out of interest, is Penguin planning to delete Deborah Lipsdatâs books because they may offend âAryan sensitivities?â Will Penguin delete Salman Rushdieâs titles because he once offended a few Muslims? For some reason, Iâm guessing that T. S. Eliot will be the first to go.

For my part, I welcome Penguinâs shameless decision. It affirms every warning I have produced for the last two decades. The fact that a publisher omitted innocent factual segments from a book simply to appease one Jewish group or another reveals a gross lack of intellectual integrity and commitment to truth. In the Britain of 2019, a leading publishing house doesnât trust readers to think for themselves. This exposes how radically Britain has changed. It is no longer an open society. Britain is now an authoritarian society. It is, in effect, an occupied zone.

To buy How They Rule the World. on Amazon UK click here. Corbyn and the Tyranny of Correctness
Gilad Atzmon
• 201 Comments • Reply
← When Jews Invoke the HolocaustDonât Say Epstein →
Hide 48 CommentsLeave a Comment
"Penguin, Rothschild and Zionist Pressure"
• 48 Comments
Commenters to Ignore
Commenters to ignore (one per line)