The Jewish state has been taking drastic measures to try to suppress the Corona outbreak within its territory. Tens of thousands of Israelis are isolated in quarantine conditions. So far, hundreds of Israelis have been diagnosed as carriers of the virus. PM Netanyahu delivered an apocalyptic speech and had his trial postponed indefinitely.

There are a few aspects peculiar to Israel and its Corona hysteria. As of this writing, no one in Israel has died because of the virus. To date, only six Israelis are in critical condition. It is possible that the Israeli health system is more advanced than all the other nations, it is also possible that Israeli doctors are more gifted than all other doctors. It may even be possible that Jews are somewhat resistant to Corona. But it is more likely that Israel has been living with Corona much longer than they are willing to admit. It is likely that, like China, they have already survived the worst of the Corona virus.

On January 6th Haaretzâs headline read âDozens Hospitalized in Serious Condition Amid Swine Flu Outbreak in Israel.â The Israeli paper reported that âThe number of visits to clinics and hospitals due to flu symptoms and pneumonia, which is a common complication, is about 18 per 1,000 people, compared to 7 per 1,000 in the same period last year.â The increase is mainly in those under age 2 and over age 65. Back in January, the Israeli health system struggled to cope.

At the time, Israeli health authorities attributed the rise in pneumonia to Swine Flu. The paper reported that 170 Israelis, including 45 children, were hospitalized in serious condition, and there were 16 deaths.

I am not a medical doctor and certainly not a virologist, I am, however, scientifically inclined. I wonder whether it is possible that Israel was hit with the Corona menace at the same time China was, or maybe even before? Is it possible that Corona didnât start in China, it was just diagnosed there? Apparently, more people have started to believe that this may be the case.

Israel is not alone. Britain has been reporting on a rise in Pneumonia cases in recent years. I have seen reports on the rise in pneumonia and swine flu in the USA. Bloomberg today asks: âA Coronavirus Explosion Was Expected in Japan. Where Is It?â Have we been misdiagnosing CV19 as swine flu and pneumonia? This would help explain why the lethal virus is not spreading as fast as expected and why it is distributed unevenly around the world.

If my hypothesis is correct, the entire approach to the Corona pandemic may be fundamentally wrong, and anti scientific. Our approach follows the rules of hysteria and imposes a time line that supports a phantasmic narrative of a global holocaust.

What we need in order to help us with this conceptual mess is an Abraham Wald moment. Wald was a mathematician working at American Statistical Research Group (SRG) during WWII. Wald and his team were engaged in questions to do with the survivability of B17 bombers. The riddle was as follows: If you donât want your bombers to get shot down by enemy fighters, you armour them. But shielding your planes with iron makes them heavy, they can hardly manoeuvre, they use more fuel and canât carry enough bombs. Over armouring your planes is a problem; under armouring is also a problem. Finding the optimal line between the two was the riddle Wald and the SRG were asked to solve.

Wald noticed immediately that enemy bullets werenât distributed uniformly on the B17s. There were a lot of bullet holes in the fuselage and hardly any in the engines.

The lesson of Waldâs insight is clear. Often it is the data that is missing that provides the path to the solution. Instead of just identifying who is catching the Corona virus, we should also investigate those outbreaks that did not resemble pandemic âsimulationsâ: those countries and regions that have not followed the predicted and lethal path. We should review past diagnoses and figure out what exactly happened in Israel in December 2019. What has been the rate of pneumonia in Britain, Germany, Japan and the USA in the last two years? Instead of just testing people for the Corona virus we ought to scan societies for Corona antibodies as well. It is possible that such an examination may reveal the best exit strategy from the current apocalyptic hysteria.

(Republished from Gilad Atzmon by permission of author or representative)
← Why Does Netanyahu Keep Winning?Public Hysteria vs. Scientific Thinking →
Follow @GiladAtzmon Who Made Coronavirus? Was It the U.S., Israel or China Itself?
Philip Giraldi
• 781 Comments • Reply 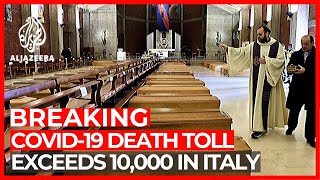