If Israelis are confused by the fact that their government treats them like laboratory pets, if they wonder why their freedom to travel, to socialise or even earn a living have evaporated, Pfizer CEO Albert Bourla produced a genuine answer yesterday. In an interview on NBC Bourla said:

“I believe Israel has become the world’s lab right now because they are using only our vaccine at this state and they have vaccinated a very big part of their population, so we can study both economy and health indices.”

I have no issue with medical experiments involving humans if the participants are fully aware of all possible circumstances and considerations involved in their consent. This didnât happen in Israel. By means of âgreen passports,â the government practically threatens to penalise anyone reluctant to participate in a âlabâ experiment for a giant pharmaceutical company with a very problematic record.

The results of this Pfizer-Israeli experiment arenât necessarily encouraging. Though it may be possible, as some studies suggest, that most vaccinated people have at least short-term protection from Covid-19, no one can deny the astonishing fact that in just 8 weeks of mass vaccination the total number of Covid-19 deaths in the Jewish State almost doubled from the number accumulated in the prior ten months.

Since Israel morphed into a nation of Guinea pigs, a virus that used to prey on the elderly and those with severe health issues has now changed its nature completely. After just 2 months of a âsuccessfulâ mass vaccination campaign, 76% of new Covid-19 cases are under 39. Only 5.5% are over 60. 40% of critical patients are under 60. The country has also detected a sharp rise in Covid-19 cases amongst pregnant women, with m ore than a few in critical condition. In the last few weeks, new-born Covid-19 cases saw a large 1300% spike (from 400 cases in under two-year-olds on November 20 to 5,800 in February 2021).

The evidence collected in Israel points at a close correlation between mass vaccination, cases and deaths. This correlation points at the possibility that it is the vaccinated who actually spread the virus or even a range of mutants that are responsible for the radical shift in symptoms above.

When CEO Bourla was asked by NBC whether one could infect others after receiving two doses of the vaccine, Bourla admitted:

“It is something that needs to be confirmed, and the real-world data that we are getting from Israel and other studies will help us understand this better.”

If CEO Bourla isnât sure whether his âvaccineâ prevents the spreading of the disease, why is he selling it around the world? Why should any government allow this substance being used until all necessary precautions have been taken? Furthermore, in the light of the emerging concern that the vaccinated can spread the disease (which CEO Bourla doesnât deny), what is the meaning of the âgreen passportâ? I guess that such a document could be easily replaced by a âgullible certificateâ awarded to those who were foolish enough to turn themselves in.

But Bourla doesnât have to wait much longer for the âresultsâ from his âlab.â I can provide him with the most relevant numbers assuming that either he or anyone else in Pfizer can read basic graphs. Every country that fell into the mass-vaccination trap has seen a similar unprecedented spike in cases and death.

The following collection graphs point at the undeniable correlation between mass vaccination and an exponential surge in Covid-19 cases and deaths. The spike in cases is often detected just 2-3 days after the launch of the mass vaccination campaign. 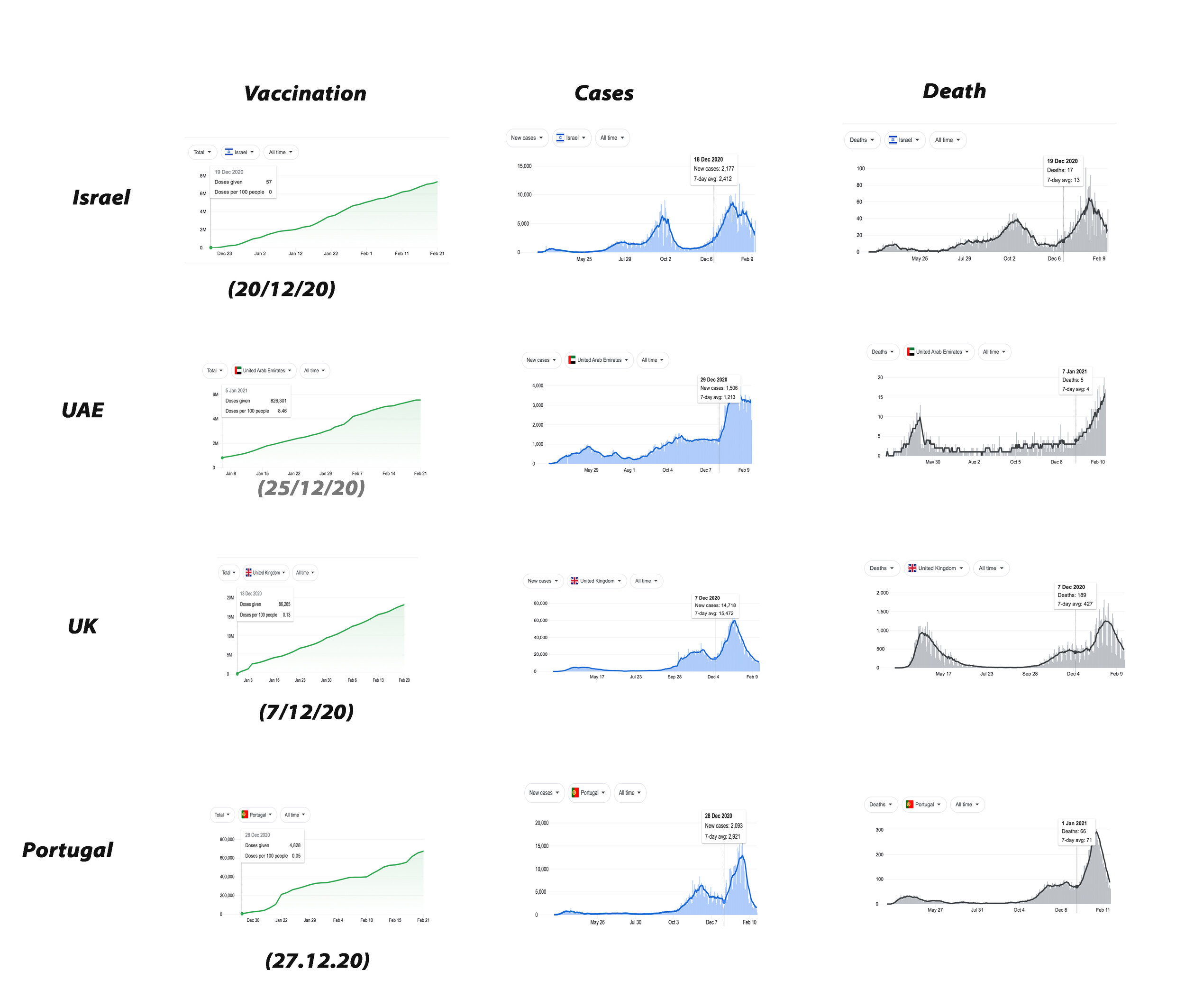 At the time Israel vaccinated itself, it was witnessing a sharp exponential rise in morbidity and death. Palestine, literally the same land, saw its number of cases and deaths plummeting

Bourla and PM Netanyahu should make an intellectual effort and explain to us how itâs possible that in Gaza, an open-air prison and one of the most densely populated pieces of land on this planet, the numbers of Covid-19 cases are minimal and without a âvaccine.â

But Palestine is not alone, as the situation in Jordan is similar. While Israel saw its Covid-19 death figures breaking through the roof, Jordanâs Covid-19 deaths from mid-November onwards look like a slippery slope.

Britain went through a similar, if not identical, tragic experience. It launched a mass vaccination campaign on 7 December just to see its numbers of Covid-19 cases and deaths rising like never before.

At the time, Britain saw its NHS crumbling, while the kingdomâs neighbours that were slow to make a decision on vaccination saw their Covid-19 numbers dropping rapidly.

I am obviously not the only one who sees that something went dramatically wrong in Israel. A group of dissenting researchers who looked into the numbers involved with the current Pfizer Israeli experiment published a detailed study two week ago. âWe concludeâ they wrote, âthat the Pfizer vaccines, for the elderly, killed during the 5-week vaccination period about 40 times more people than the disease itself would have killed, and about 260 times more people than the disease among the younger age class.â

Based on the Pfizer/Israeli âlaboratoryâ experiment, I drew the following sarcastic conclusion: If you catch coronavirus you may die, but if you follow the Pfizer path, not only do you have a 95% chance to survive on top of the 99.98% provided by Covid-19, you may also kill some other people on the way. The Israeli Mutant, the IDF Prophecy and the Reality on the Ground
Gilad Atzmon
• 74 Comments • Reply COVID VACCINE - the Nightmare Scenario
Mike Whitney
• 115 Comments • Reply
← The Israeli Mutant, the IDF Prophecy an...The Vaxi-Nation â People Like No One ... →
Hide 101 CommentsLeave a Comment
"Hot Off the Press: Pfizer CEO Albert Bourla Admits Israel Is the 'World's Lab.'"
• 101 Comments
Commenters to Ignore
Commenters to ignore (one per line)

• Thanks: Alfred, roonaldo
• Replies: @Skeptikal, @roonaldo
← The Israeli Mutant, the IDF Prophecy an...The Vaxi-Nation â People Like No One ... →
Current Commenter
says:
Current Date at Time Now
Leave a Reply - Comments on articles more than two weeks old will be judged much more strictly on quality and tone
Cancel Reply
Commenting Disabled While in Translation Mode

Social Immobility
We have to be resigned to living in a world where social outcomes are substantially determined at birth
James Thompson • June 28, 2022
• 2,900 Words • 47 Comments • Reply