“In A Time Of Universal Deceit, Telling The Truth Becomes A Revolutionary Act” – George Orwell

At the moment, the Jewish State is experiencing growing political instability while exploring its ability to defy Netanyahuâs alleged criminality and his racial incitements against Arabs, while at the same time, the UK has been reduced into a dutiful Israeli remote colony.

Two day ago, the Lobby scored three significant victories that are indicative of Britainâs descent into an Orwellian dystopia. It is now an unfit habitat for intellectuals, artists and humanists and their exodus has begun.

In a statement astonishing for its obsequiousness, âoppositionâ leader Jeremy Corbyn praised the police for tearing down a poster depicting, in cartoon form, an uncanny portrayal of Corbyn himself under âattackâ by Benjamin Netanyahu shown piloting an Israeli air force plane named âThe Lobbyâ and dropping bombs of âdefamationâ with the words âanti-Semite, anti-Semite, anti-Semite.â 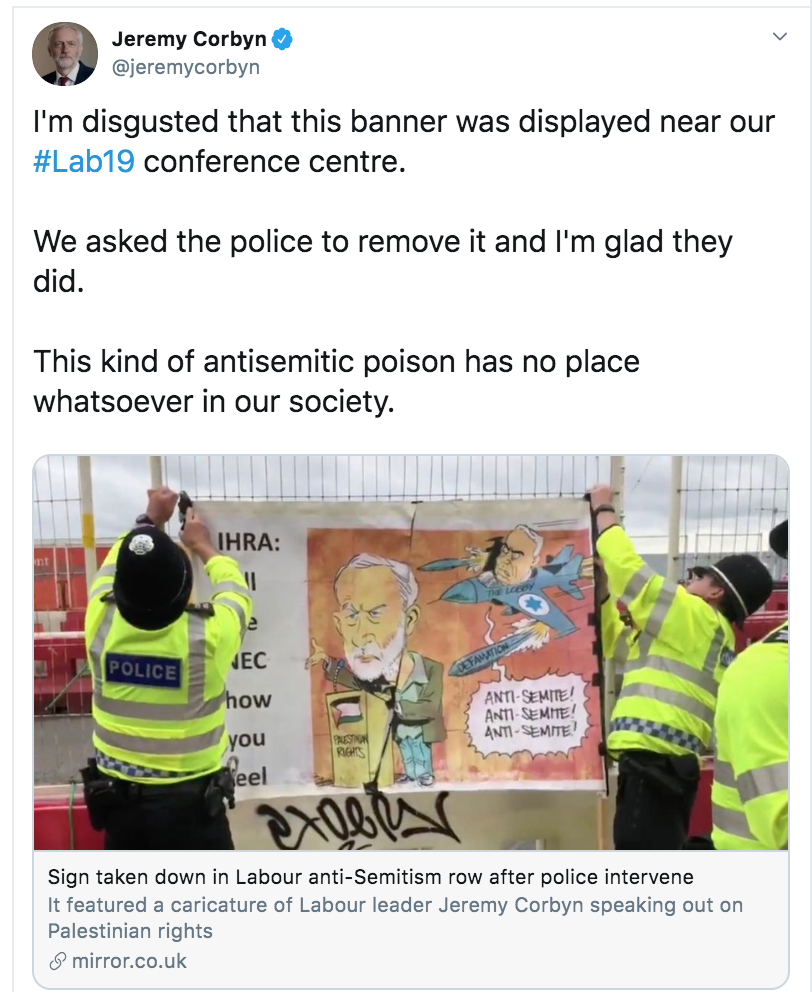 By his response, Corbyn was kind enough to reveal to the Brits that he could be many things, but acting as a prime minister isnât really among them. And not just because of his clumsy unprincipled action against a legitimate political cartoon but because the man publicly displayed that he canât handle elementary freedoms. Somewhere, there exists a positive interpretation that would make Corbynâs shameless groveling seem sophisticated, his response did make the cartoon into national news so that every Brit is now aware of the poster and its message.

Yesterday we also learned that Israelâs stooges managed to cancel a literature event in Brighton. Bad News for Labour- Antisemitism, the Party and Public Belief is, according to its publisher, âa ground breaking study on the reality behind the headlines on antisemitism and the British Labour Party.â I have not seen a âground breakingâ text from Pluto for years, nonetheless, someone within the Hasbara army decided that the Brits are unfit to digest the book. Waterstones Brighton ârapidly surrenderedâ and canceled the event. One more piece of evidence that Britain doesnât really need enemies, it became an authoritarian society voluntarily. I wonder how long it will be before Corbyn tweets that it was he and the Labour Party who begged Waterstones to cancel the event. 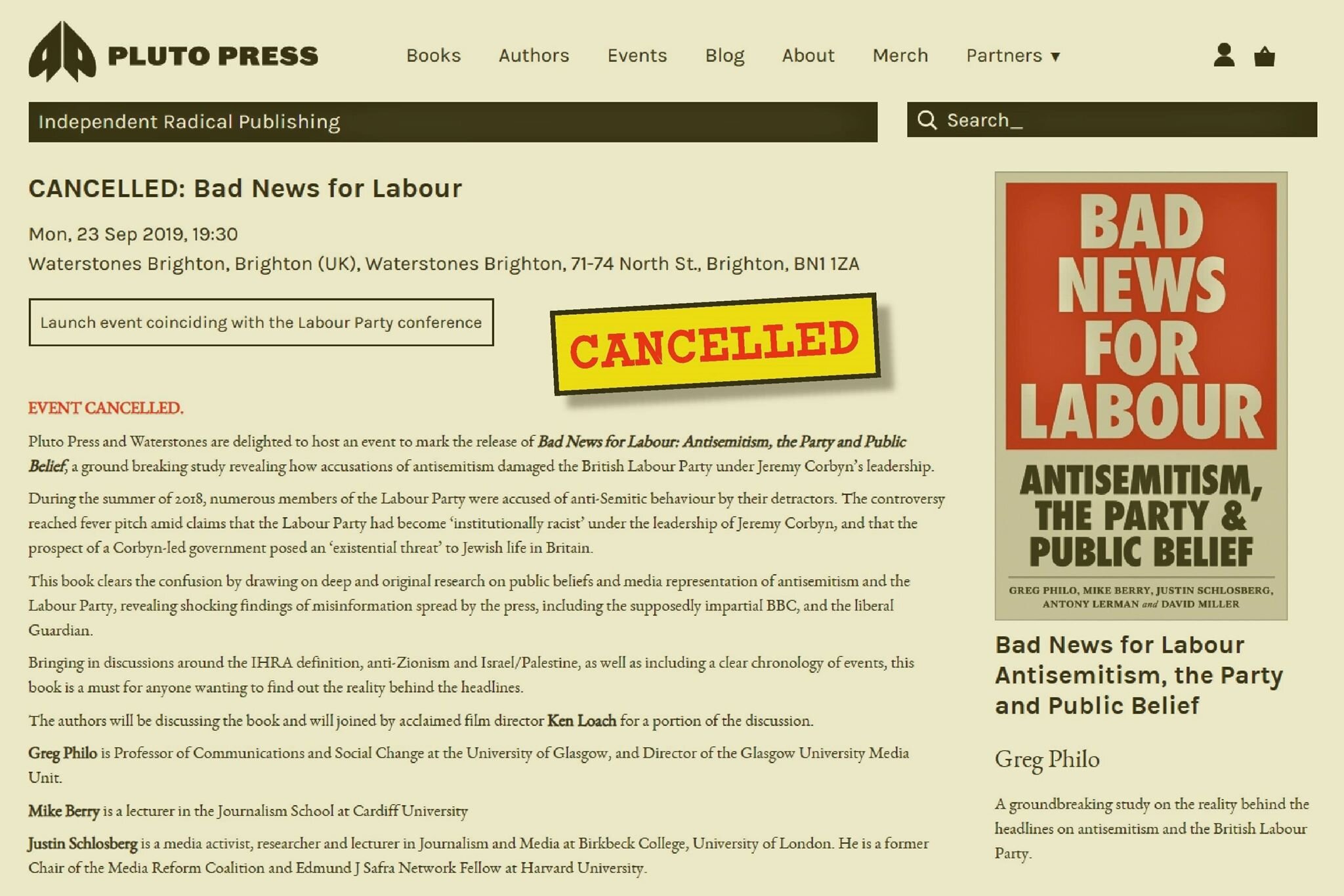 But Zionist tour de force did not end there. We learned yesterday that singer, songwriter and right wing enthusiast Alison Chabloz was once again sent to jail: this time for eight weeks. The Zionist Campaign Against Antisemitismâs web site reports that âDistrict Judge Jonathan Taaffe found Ms Chabloz guilty of breaching the conditions of her suspended sentence after blog posts that she published since June 2018 were found to constitute a breach of a social media ban.â Apparently the definition of âsocial mediaâ* in Britain underwent a dramatic expansion this week in order to fit the Zionist call. The CAA was pleased to let us know their part in this fiasco, âthe trial in Chesterfield today follows contact between Campaign Against Antisemitismâs lawyers and the National Probation Service.â

In 1917 Lord Balfour issued a declaration in the name of the British government announcing support for the establishment of a “national home for the Jewish people” in Palestine, then an Ottoman region with a tiny Jewish population. In 1917 Britain was an empire although Palestine wasnât then a British colony. Just over one hundred years later not much is left of the empire and even less remains of British dignity. Britain has allowed itself to be reduced to an Israeli colony, even to the point that Britain willingly sacrifices any of its most sacred values when asked to do so by a single right wing ethnic lobby that is largely committed to foreign interests. As of Today, I am the Only Winner of the 12 December Election!
Gilad Atzmon
• 107 Comments • Reply
← The Use of Low-IQ Troops in War ZoneIsrael and the West Do Not Have the Mea... →
Hide 94 CommentsLeave a Comment
"A Great Day for Zion"
• 94 Comments
Commenters to Ignore
Commenters to ignore (one per line)

• Replies: @Jim Edwards
← The Use of Low-IQ Troops in War ZoneIsrael and the West Do Not Have the Mea... →
Current Commenter
says:
Current Date at Time Now
Leave a Reply - Comments on articles more than two weeks old will be judged much more strictly on quality and tone
Cancel Reply