The case of Israel, leading the world by far in the mass vaccination contest, doesnât leave much maneuvering room for skeptics. Since Israel launched its vast vaccination campaign in December, it has been witnessing an exponential rise in COVID-19 cases and deaths. By now, the British Mutant has become Israelâs dominant COVID strain. Israelâs health system is on the brink of collapse.

In my article Guinea Pigs United I pointed out that the rise in cases and deaths correlates with the distribution of vaccines. In Israel, the Orthodox Jewish communities that were vaccinated en masse saw COVID cases rise 16-fold, while Israeli Arabs who at large refrained from vaccination saw numbers of COVID cases dropping sharply.

But Israel is not alone. Some other states have followed a similar path and their situation is becoming as catastrophic as the crisis we witness in the Jewish State.

I would have loved to believe that it is not too late for Britain to postpone the current mass vaccination campaign and closely examine the possible correlation between mass vaccination and mutants. For those who wonder, I am not against vaccines or modern medical practices, but I do contend that before a nation decides to inject a new substance into its muscle, it may want to verify what this substance is and what are the exact implications involved. It is crucial to verify, for instance, whether the rise in lethal mutations that we have seen in Britain is related to mass vaccination and the vaccine trials that have been taking place in the kingdom since the summer. The rapid change in the age of COVID-19 cases which we see in Israel and Britain also correlates with mass vaccination. Do we know what are the implications of vaccines on pregnant women or embryos?

It is hardly a secret that those who seem to be enthusiastic about the vaccines are also claiming to be in favour of âgood scienceâ or even ârealâ science as they often refer to it. The statistical facts that are related to mass vaccination are not very promising. Examining the situation in the countries that are engaged in mass vaccination such as Israel, Britain, the USA and the UAE reveal that these countries witnessed a clear decline in COVID cases and deaths during late November and early December. However, just a few days after those countries launched their vaccination campaigns, the numbers of COVID cases and consequently deaths went through the roof.

In comparison, you should also examine the case of Britainâs neighbours such as France, Belgium and Holland. Those countries are subject to similar climate, urban conditions, and demography, yet COVIDâs curve in these countries is completely the opposite: COVID deaths and cases that were in decline since mid-November, early December are still dropping until now. None of these countries saw a sharp rise in cases, let alone deaths, in the given period (December, January).

As I was writing these lines I was informed that Portugal is also facing a COVID crisis. A brief examination of its latest data reveals that its COVID curve is identical to Britain and Israel. I obviously assumed that the current sharp rise in COVID cases is somehow related to the vaccine. A quick internet check revealed that Portugal started its mass vaccination campaign on 27 December. As you can see in the graph below, until that date the numbers of COVID cases per day were in clear decline. Yet, 3 days after the mass vaccination campaign started the numbers of cases started to grow exponentially. Portugalâs health system is now on the verge of collapse. Its situation is identical with other countries that favoured the mass vaccination path.

Both British and Israeli governments report almost once a day about some âpositive signsâ that may suggest that the âend of the pandemicâ is just behind the corner. These news are usually supported by claims about a âdecline in cases.â Needless to mention that reports on the ground usually contradict these optimistic suggestions. But since we are in a scientific mode, letâs examine the âstatistics.â

A quick glance at British and Israeli ânumbersâ reveal that the numbers of new cases in late January are in sharp decline, and this seems to be positive news, yet the number of daily deaths keep climbing. This is very worrying. 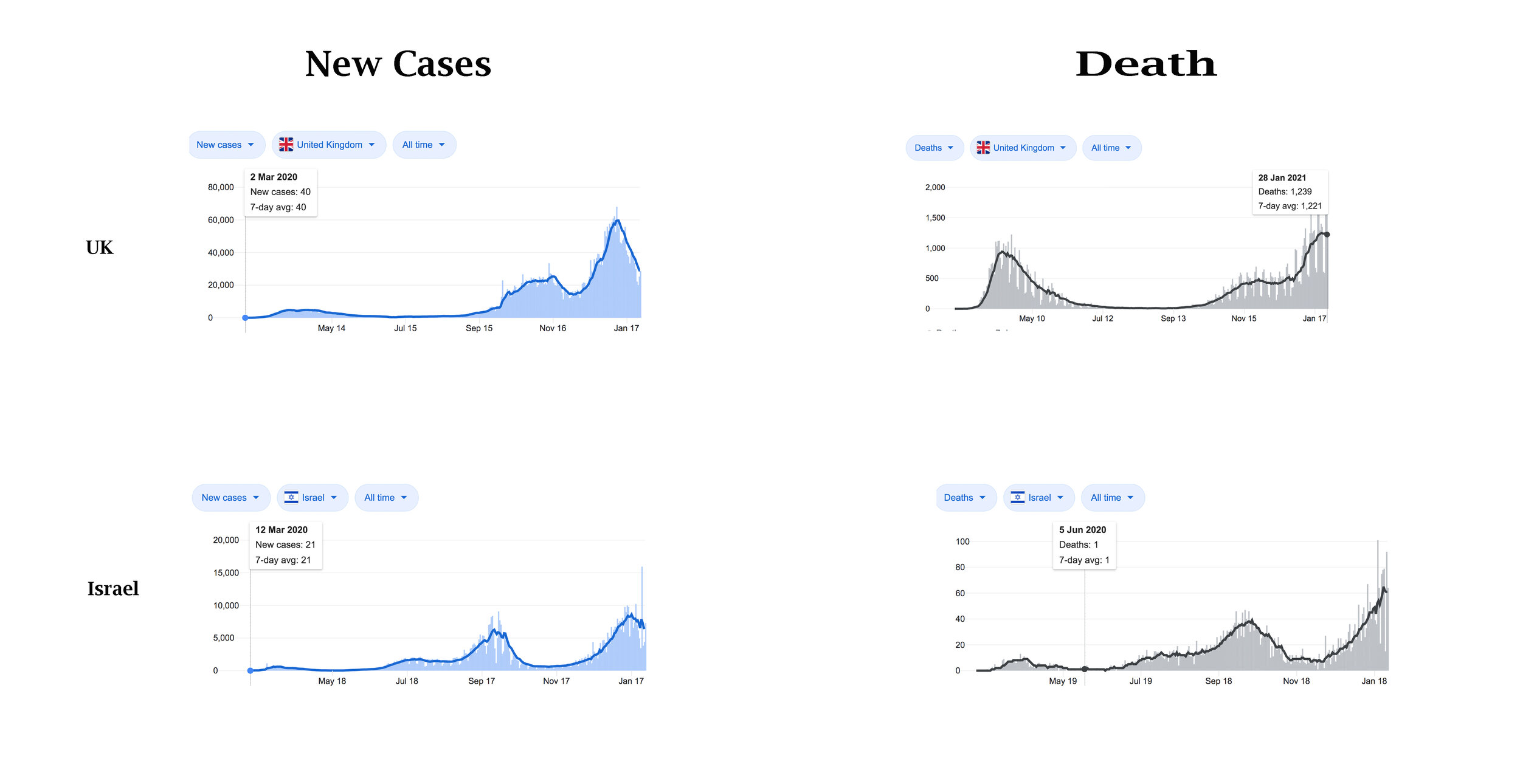 However, a quick examination of other European and Middle Eastern COVID statistics in countries such as Austria, France, Germany and Jordan reveals that the graphs representing numbers of new cases and daily deaths are almost identical in shape. How do we then explain the peculiar anomaly that is reported in Israel and Britain: a âdeclineâ in cases on the one hand, a sharp exponential rise in deaths on the other? 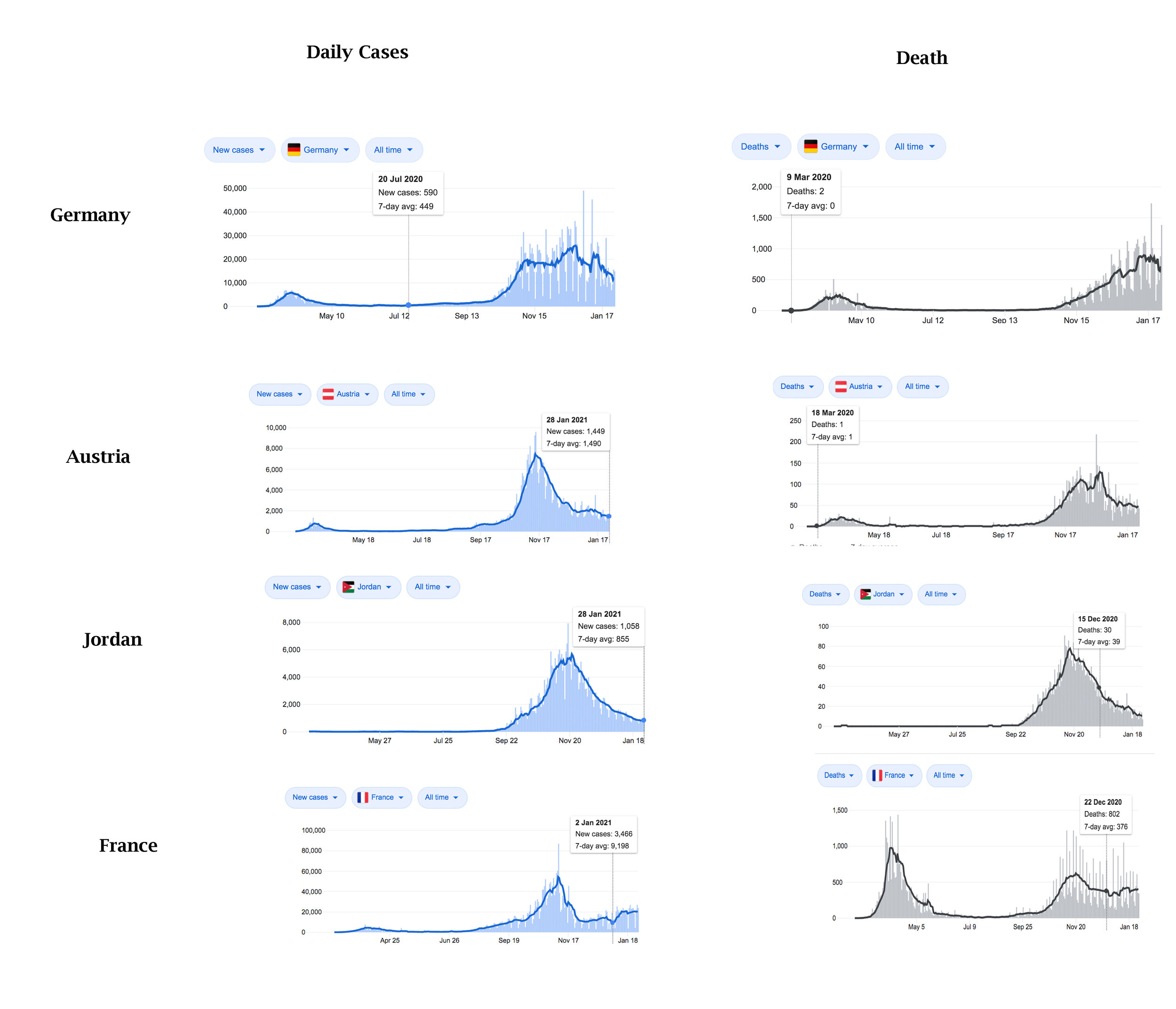 One (clumsy) possible explanation is that in the mass vaccinated countries less people are contracting COVID, yet for those who do the virus is far deadlier. This would mean that that if the vaccine is producing some positive results for the vaccinated (such as immunity), the general impact on the whole of society is pretty devastating, the number of deaths is growing rapidly.

Another explanation which I believe is far more likely is that both the British and Israeli governments are conducting less tests. This obviously leads to a reduction in the number of new verified cases. It may look good in the Guardian or the Jewish Chronicleâs headlines but unfortunately it doesnât stop the disease or its lethal impact.

In Israel, mass vaccination was Bibiâs genius political ploy, except that it didnât work very well (so far). It is more than likely that Trump also gambled on a vaccine being approved ahead of the election. As we know, Pfizer actually announced its âsuccessâ very soon after the election. Needless to mention that Boris Johnson shares one or two features with Bibi and Trump. It is more than likely that in the USA, Israel and Britain, mass vaccination was unleashed as a political tool. Peculiarly, it is the progressive and leftist crowds who are most enthusiastic about the vaccines delivered to them by the most outlandish right wing political icons of our time.

Vaxxing, Covid, and International Mortality Rates
Ron Unz
• 708 Comments • Reply
← In the WW3 In Which We LiveIsrael Leading Scientist Admits: âthe... →
Hide 107 CommentsLeave a Comment
"A Brief Examination of Some Facts Related to Mass Vaccination"
• 107 Comments
Commenters to Ignore
Commenters to ignore (one per line)

← In the WW3 In Which We LiveIsrael Leading Scientist Admits: âthe... →
Current Commenter
says:
Current Date at Time Now
Leave a Reply - Comments on articles more than two weeks old will be judged much more strictly on quality and tone
Cancel Reply
Commenting Disabled While in Translation Mode