Dear Readers: Many of ustedes must be scratching your heads right now. âWhat happened to Â¡Ask a Mexican!â youâre preguntando yourselves. âWho the hell is this cholo nerd where the Mexican logo used to be?â

It is I, gentle cabrones: your eternal Mexican. Gustavo Arellano, child of immigrants from Zacatecas, one whom came to el Norte in 1969 in the trunk of a Chevy driven by a hippie chick from Huntington Beach. And Iâm triste to say that this columna is coming to an end. Ustedes probably donât know this, but my day job during the life of Â¡Ask a Mexican! was at OC Weekly, an alternative newspaper in Orange County, California, where I was born and raised (donât believe The Real Housewives of Orange County: thereâs a chingo of raza here). I started as a staff writer, then became managing editor, then was editor for nearly six years until October 13, when I resigned instead of laying off half my staff, just like the Weeklyâs owner wanted me to. No me rajÃ©, and Iâll never regret quitting my dream job because I know I did the right thing.

But with me leaving the Weekly, I also must leave behind Â¡Ask a Mexican! See, I donât own the trademark to the title, and Iâm canât pay muchos pesos for something that the Weeklyâs owner (or the ones before him) shouldâve given to me as a gift for 13 years of being the hardest-working Mexican this side of Beto DurÃ¡n.

I thought about continuing under a different name (Â¡Ask a Pocho! Â¡Query a Mexican! Â¡Pregunta, Pendejo! But then I realized I donât have to continue the column anymore. See, Iâve been to el cerro. And Iâve seen the Promised Land of AztlÃ¡n.

It sure doesnât seem like that at a time when millions of our friends and familia are at risk of deportation, when Donald Trump wants to build a border wall (man, whereâs Alex Lora when you need him?) and when gabachos keep mistaking DÃ­a de los Muertos for Halloween. But weâre now at a place where whip-smart humor is at the touch of a meme. Where our political and economic power continues to soar like voladores totonacos. We live in an era where everyone can be a defender of la raza against gabachos, whether said gabas assault us or try to claim Rick Bayless is great.

In other words, Â¡Ask a Mexican! is no longer necessary, because Mexicans have won a war that began when Sir Francis Drake sunk the Spanish Armada. Weâre here , y no nos vamos. Weâre victims no longer; weâre actually chingonxs. And the sooner Mexicans realize this, the better weâll be. 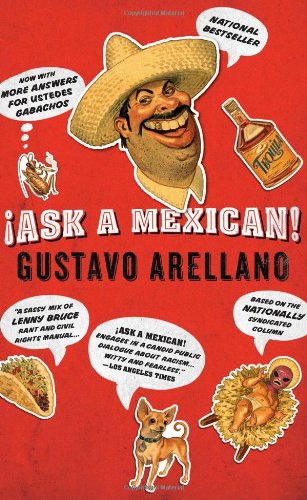 Iâll let others debate whether my attempt to fight racism with satire and stats was visionary or just vendido. Iâll still answer questions about Mexicans on The Tom Leykis Show on the last Wednesday of every month at 4 p.m. (tune in to blowmeuptom.com), because doing so keeps my mind Julio Cesar Chavez sharp and not Julio Cesar Chavez, Jr. soft.

But in print, no mÃ¡s. Besides, let Â¡Ask a Mexican! die, and let its passing join the pantheon of gabacho atrocities against Mexicans, like the U.S. stealing half of Mexico or Rick Bayless.

I wish modern-day journalism allowed me more print space, so my thanks must be brief. Gracias to: friends, Marge, family,my chica; All the papers that carried my columna over the years; Santo NiÃ±o de Atocha; Will Swaim; Daniel Hernandez. David Kuhn. So many more.

Nos vemos, gentle cabrones. Follow me on social media to see what I do next, and hook a compa up with bacanora! No se rajen against evil. Diga no a la piraterÃ­a Â¡Viva la Reconquista! Oh, and #fucktrump

← Why Isn't Tom Flores in the NFL Hall of...
Current Commenter
says:
Current Date at Time Now
Leave a Reply - Comments on articles more than two weeks old will be judged much more strictly on quality and tone
Cancel Reply
Commenting Disabled While in Translation Mode

Subscribe to All Gustavo Arellano Comments via RSS
PastClassics

The Twitter Files
The Mechanism for Terminating Free Speech on the Internet has already been Put in Place
Mike Whitney • December 6, 2022
• 2,300 Words • 52 Comments • Reply

Critique of Eugyppius (Blogger)'s Mis-Characterization of 'Wokeness' as a Decentralized Movement of Nutters When, in Truth...
Jung-Freud • December 4, 2022
• 7,000 Words • 40 Comments • Reply