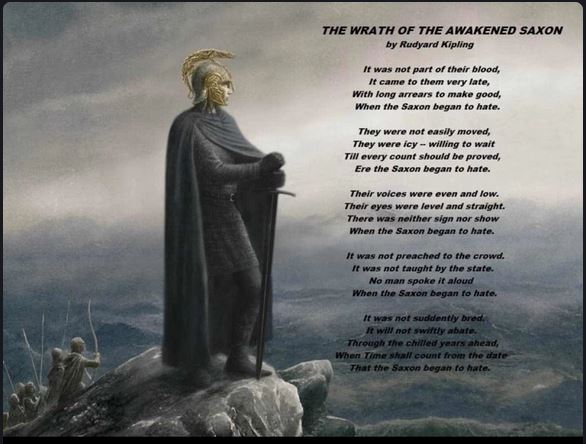 âA country deserves what it tolerates, and will assuredly get more of it,â said my favorite political commentator (me).

He has also asked, âAnd this is supposed to help blacks?â

Across the country the rabble rampageâBlack Lives Matter, Antifa, and mobs sacking stores. They are by no means all black. Whites participate in the vandalism, blacks do the looting and beatings of whites. Both are out of control. Anger over this quietly grows. A spring is being wound, methinks, a hammer cocked, the scene set for a grisly outbreak of racial bloodshed.

The backdrop will be the hatred between Elites and Deplorables, exacerbated by a declining economy, financial anxiety for the future, anger over immigration, the epidemic, and so on. Yet it is race that will provide the spark.

Does this sound like unbalanced raving? If I had told you the day before the Floyd incident that in a few days cities across the country would be in flames with looting and vandalism, would you have thought me unbalanced?

For whatever reason, catastrophic racial realities exist, disguised and hidden by the White House and the media. Maybe these think they are preventing, or postponing an explosion that might occur if people knew what was happening. Maybe they are stroking their voters. This video, of actual events, catches the straits in which America finds itself. The degree to which it shocks you is a measure of the effectiveness of the journalistic suppression.

The political landscape is of course complex. In a curious twist the white Elites use blacks against their Deplorable enemies, claiming and perhaps sometimes believing that they are opposing racism. To this end, they eliminate bail, defund the police, hide crime by blacks, order the police not to use tear gas and rubber bullets. Police resign in droves, not wanting to be the next Chauvin. Homicide rises sharply. Looting flourishes.

Crime by blacks is now barely restricted, and reported as little as the big media can manage. For example, Thirty-two Black-on-White Homicides, for October. These typically appear for a couple of days in local papers but are never picked up by the majors

The results of the unpolicy?

Seattle has become so dangerous that police have to walk the cityâs employees to transportation after work.

We now see stores selling expensive goods attacked by organized flash packs, windows smashed and wares stolen, in minutes. The looters are not Japanese school girls. In San Francisco, where shoplifting is virtually legal, store after store leaves for friendlier climes, unable to withstand the losses. Chicagoâs Magnificent Mile, a region of stores selling prestige goods, now has many empty stores because of looting. Goodbye tax base. Shortly, goodbye middle class. There is no reason for these robberies to end since they are profitable and almost free of risk.

How can the spreading lawlessness be stopped? Easily, but not nicely. Throwing a brick at a policeman is at least ADW, assault with a deadly weapon, and arguably attempted murder, twenty to life. Apply it! Lighting buildings or cars is arson. So charge it and throw the book. Allow store owners to shoot looters. But this we will not do, or at least not yet, and nothing else will work.

The brighter among the woke worry that if ever whites develop a racial consciousness like that of blacks, things will get very, very ugly. Thus the hysteria over White Supremacy. Unfortunately, the best way to promote white consciousness is exactly what the woke are doingâto encourage crime by blacks, allow the beatings, and endlessly pummel whites for racism. The woke are working hard at getting exactly what they donât want. They are not doing blacks a favor. If an eruption comes, it will be bad for whites but worse by far for blacks who, whether they like to admit it or not, depend on whites for much. The country would never recover.

Journalists, perhaps lacking the wit to understand what they are doing, labor to intensify racial hostility. In particular, they relentlessly tell blacks that they are victims of whites, that they are being killed in large numbers by white police, while suppressing the fact that far more whites are killed by blacks. This understandably enrages blacks who, emotional, less educated than whites, reading little, believe it.

Having worked in the scrivenerâs trade, I partly blame the joy of shared indignation and a diminishment of the former belief in fact-checking. (It used to be said, âIf your mother says she loves you, check it out.â No more.) Wild partisanship adds to the problem. The journalists of Washington read each other, write for each other, talk to each other and, finding that they all think the same things, assume that they must be right, because they all think the same things.

Further, networks run by people of a particular view hire people who agree with them. Reporters, too, seem gripped by the free-floating anger that afflicts America as a whole. Bingo.

Remember that the strongest human proclivity, stronger than the sex drive, is to avoid information working against ardently held beliefs. Liberals do not, will not, read Fox News or American Renaissance, and conservatives avoid Salon and NPR. It is curious that reporters, whose job is to know what goes on in America, largely donât.

Remember also that that the networks have limited news-gathering ability compared to freelance websites. During the Floyd riots, hundreds, maybe thousands, of people with smartphones recorded video of looting, vandalism, and beatings. These were posted, and circulated, freely on the net, but not on CNN. They showed the looters to be almost entirely black. The vandals no, but the looters, yes. In my (now limited) acquaintance with the media in Washington, they really donât know what is happening.

The upshot? It would be a very good idea to stop the lawlessness, the racial attacks, and the mob robberies before those targeted decide to take things into their own hands.

For the literally inclined, perhaps worth contemplation:

THE WRATH OF THE AWAKENED SAXON
by Rudyard Kipling

It was not part of their blood,
It came to them very late,
With long arrears to make good,
When the Saxon began to hate.

They were not easily moved,
They were icy â willing to wait
Till every count should be proved,
Ere the Saxon began to hate.

Their voices were even and low.
Their eyes were level and straight.
There was neither sign nor show
When the Saxon began to hate.

It was not preached to the crowd.
It was not taught by the state.
No man spoke it aloud
When the Saxon began to hate.

It was not suddenly bred.
It will not swiftly abate.
Through the chilled years ahead,
When Time shall count from the date
That the Saxon began to hate.

FRED REED describes himself as [previously] a âWashington police reporter, former Washington editor for Harperâs and staff writer for Soldier of Fortune magazine, Marine combat vet from Viet Nam, and former long-haul hitchhiker, part-time sociopath, who once lived in Arlington, Virginia, across the Potomac River from the Yankee Capital.â
His essays âon the collapse of Americaâ Mr. Reed calls âwildly funny, sometimes wacky, always provocative.â
âFred is the Hunter Thompson of the right,â seconds Thomas E. Ricks in Foreign Policy magazine. His commentary is âwell-written, pungent political incorrectness mixed with smart military commentary and libertarian impulses, topped off with a splash of Third World sunshine and tequila.â

FREDâS BOOKS ARE ON AMAZON, HERE Race: A Very, Very Dismal Reality
Fred Reed
• 639 Comments • Reply
← Tells About An LGBTQ Legal Landmark and...Bads, Wads, and the Unlikelihood of Rea... →
Hide 7 CommentsLeave a Comment
"Stop Lawlessness and Looting Before Itâs Too Late â¦ for Blacks"
• 7 Comments
Commenters to Ignore
Commenters to ignore (one per line)

← Tells About An LGBTQ Legal Landmark and...Bads, Wads, and the Unlikelihood of Rea... →
Current Commenter
says:
Current Date at Time Now
Leave a Reply - Comments on articles more than two weeks old will be judged much more strictly on quality and tone
Cancel Reply
Commenting Disabled While in Translation Mode