Much is written about slavery and its aftermaths. A large part of this is frenetically modified history issuing from people both excited and poorly read, a comic-book version apparently intended to support agendas of the impenetrably adolescent Left. A few points:

First, slavery was always bad, frequently hideous, much worse in the Deep South than in Tidewater or New York, and consequent to the same desire for cheap labor that now results in importing Mexicans and exporting jobs to China. Any notion that abuses were rare or exaggerated is twaddle. A vast amount of contemporary writing documents this. The best-known account of slavery in the South is is Journal of a Residence on a Georgia Plantation by Fanny Kemble, a British actress who married a planter in, as the title suggests, Georgia. Also contemporary, and little known, Slavery as it is in America: Testimony of a Thousand Witnesses. An account of the horrific Northern variety is 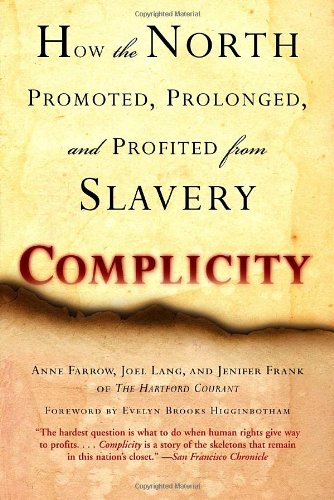 Complicity: How the North Promoted, Prolonged, and Profited from Slavery

Second, the slave trade being phenomenally profitable, much like the drug trade today, many were involved who today choose to forget this: Yankees, Arabs, Jews, Quakers, and Southerners. It was strongly defended by many Christians in the South, and attacked by Christians in the North, who had no financial stake in it. Yankees owned slaves and, in the draft riots in New York in 1863, lynched and burned them alive. In this world angels are few on the ground. The North now simply lies about it.

Not well known, by design: Wikipedia: âIn 1741 Manhattan had the second-largest slave population of any city in the Thirteen Colonies after Charleston, South Carolina.â In the revolt of that year, blacks were hanged and burned alive. In New York. Many similar things happened, now artfully forgotten.

Third, among the historically illiterate a notion exists that the South consisted of rich aristocrats living in mansions. A few, yes. Most, not even close. Poverty among whites in the South and the associated Appalachia was often extreme.

Fourth, freeing the slaves was an easy solution if you didnât have the problem. If you were a planter with a wife and three little girls, would you give up your house and subject your family to poverty, rape, robbery, and revenge from blacks? I am not asking whether you think they should have done it, but whether in the circumstances you would do it. Another way of putting it: For what moral cause would you, today, give up your job, house, and investments, and step on the sidewalk with your family?

You might have done what many slaveowners did, what George Washington did: free your slaves in your will. (This reminds me of Saint Augustineâs cry, âOh Lord, grant me chastity, but not just yet.â) You could thus express your opposition to slavery while enjoying its benefits.

Fifth, many today would say that Southerners deserved their problems, having brought them on themselves by enslaving blacks. But of course they did not. By 1861 most were born into a slaveholding society. Most were not enthusiastic about it, but had little idea what to do.

Anyone interested in just how divided whites were about slavery might the debates in 1831-2 in the Virginia House of Delegates. There was heated argument favoring no emancipation, gradual emancipation, immediate and total emancipation, and Lincolnâs solution of sending blacks back to Africa.

They ended by doing nothing. Part of the sentiment favoring keeping slavery came from Tidewater, where large landholders depended on slavery, and partly from the sense of having the tiger by the tail: âDear God, what now?â

Sixthâand importantâwas the Haitian slave revolt of 1791-1804, of which few Americans have heard. Black Haitians butchered and tortured the whites in an unspeakable bloodbath. Southerners, well aware of this, decided that freeing the slaves would be mass suicide. As it happened when the slaves were emancipated after the Civil War, no bloodbath came. Events in Haiti provided ample reason for not taking the chance.

The sentiment was reinforced in 1831 by Nat Turnerâs revolt in which slaves in Virginia revolted and butchered some sixty whites, families included. I cannot see why this was regarded as a crime. Certainly slaves have a moral right to kill their owners. If someone tried to enslave you and your family, would you kill him? I would. The slaughter did not reassure surrounding Virginians. Again, slavery was an easy problem to solve if you didnât have it.

Seventh, Southerners believed that they knew the Negroes and that they could not function as equals of whites and thus would destroy society. Except for ardent abolitionistsâperhaps for ardent abolitionistsâso did Northerners, but by then these latter didnât have many Negroes and never expected to. Today, a century and a half after the Civil War, the Southerners seem to have been right.

Eighth, controversy, usually witless, persists over whether the South fought to preserve slavery. The usual approach is to quote Southern planters, politicians, and newspapers as to the sacred quality of the peculiar institution and how God liked it. QED.

But of course these were the slave-owners, the rich, and their hangers on. They favored slavery for the same reason American businesses favor remote wars in Afghanistan: they make money at it. People do not fight bloody wars over years for the benefit of people that, after the war, they will have no desire to associate with. If you had asked a thousand Confederate infantrymen why they were fighting, do you think they would have said, âIâm fighting and dying and seeing my friends screaming gutshot so that rich bastards can own slaves while I live in a shack?â

You, the reader, probably do not favor mistreatment of women and girls. Would you favor fighting a war in Afghanistan in which America would lose over six and a half million deadâproportionately to population, what the country lost in the Civil Warâto impose civil rights for women in Afghanistan?

Ninth, hypocrisy. You, the reader, probably live (as I long did) in a society in which millions of blacks live pointless lives, shooting each other in decaying cities with horrible schools. If you are a Yankee of the usual intolerable virtue, as so many are, note that blacks suffer these awful conditions chiefly in Southern cities such as Trenton, Newark, Camden, Philadelphia, New York, Detroit, Chicago, Flint, Gary, Milwaukee, Cleveland, Baltimore, and Washington DC. What have you done about itâother than, perhaps, talk? And you are in no danger of the consequences of whatever you might propose. Southerners were.

Tenth, it is worth noting that the Emancipation Proclamation of January 1, 1863, now also sold as a moral measure by the sainted Lincoln, in fact freed not a single slave. It applied only in the Southern states, where it was intended to ignite a revolt. Slaves in the North remained in slavery. Lincoln himself said, in letter after letter after document after speech and before Congress, over and over and over, that he would not oppose slavery in the South if only it would come back to the Union, andâyes, boys and girlsâhe wanted to send blacks back to Africa. Contemporary drawing of the 1863 draft riots in New York. Hangings and burnings alive occurred in this racially righteous city.

But the textbooks come from New York.

IN fact, the North wanted no blacks of any kind, having discovered that sweating European immigrants was more profitable. If you own slaves, you have to feed them and care for them no matter the business climate. This was suited to an agricultural economy. But the North was industrial. It made more sense to pay helpless immigrants almost nothing while they lived in tubercular filth with their children working twelve hours a day and dying of preventable diseases. After all, the next ship in would bring more. In short, it was the moral equivalent of slavery but more cost-effective and without the stigma. Eleventh, edited out of history for an American public with a bumper-sticker mind is that slavery was a product of the North. Slave ships in hundreds left from New York, Rhode Island, and Connecticut for Africa. When the slave trade was outlawed in 1808, Northern slavers sold contraband slaves to the South or to the godawful sugar-raising West Indies or to South America. The North grew rich from the cotton of the South, financed its plantations, and provided the slaves. Further huge profits came from trading in the products of the sugar plantations, which it turned into rum.

The North had tens of thousands of slaves itself. It not infrequently burned blacks alive, connived at the kidnapping of free blacks to sell to the South, returned runaway slaves. When abolition-minded whites set up schools for blacks, Northern mobs attacked them and Northern courts refused to do anything about it. Again, Complicity is a good account.

We drift in a sea of historical fraud.