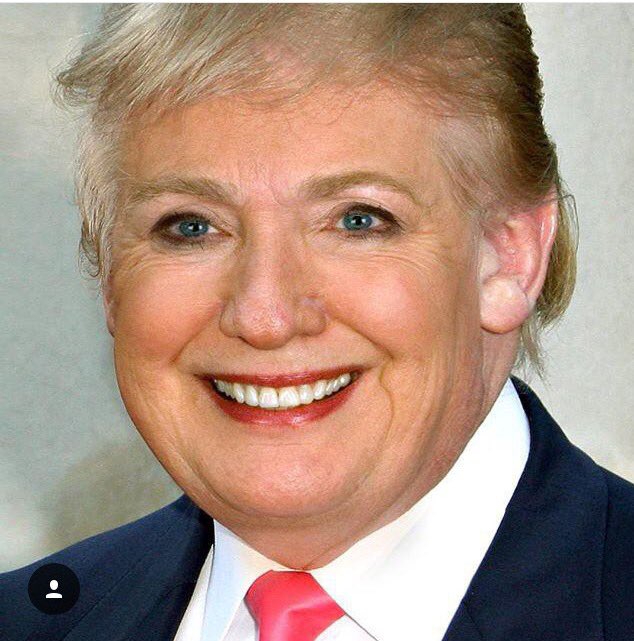 Oh Lord, itâs happeningâthe remanufacture of Trump by the Establishment. During the campaign, Trump and the Basilisk had nothing in common but their hair dye. Now, almost daily, he looks more like her.

He gets embarrassing. Regarding the alleged gassing in Syria, quoth Donald:

âWhen you kill innocent children, innocent babies â babies, little babies â with a chemical gas â¦ that crosses many, many lines, beyond a red line. â¦ And I will tell you, that attack on children yesterday had a big impact on me â¦ my attitude toward Syria and Assad has changed very much.â

God almighty. Who wrote thisâa middle school girl with Câs in English, or the President of the United States? Did he retire to his bedroom for a good cry?

Apparently he ordered his missile strike without bothering to find out what happened. The usual suspects are driving him like a sports car.

The election was a choice between fetor and a lunatic. We chose the lunatic. Whether this was better than the alternative, we will never know, but Trump is going from bad to worse, or as the Mexicans say, de Guatemala a Guatepeor.

Does he believe this stuff? Is he naive enough to think that there was something unusually horrible about the attack? Horrible, yes, but not in the least unusual. Do you know what everyday, boring artillery does to children? Five-hundred-pound bombs? Hellfire rockets? Daily Mr. Trumpâs military and his allies daily drop shrapnel-producing explosives on people, cities, towns, adults, children, weddings and goatherds in Afghanistan, Iraq, Syria, and Yemen. Good draft-dodger that he was, he probably has never seen any of this. Good psychopath that he may be, he may not care.

This whole gas-attack business smells to high heaven. It looks nicely calculated to force him to attack Assad. Gas was important: Killing babies, little babies with explosives is so routine that no one cares, but we have been programmed to shudder at the thought of Gas!

Targeting children was a nice touch. Definitely a PR bonus. So Donald goes into his Poor-widdle-fings weep, while Americans weekly kill more children in three to seven countries, depending on the date.

Is the man consciously a liar? Hasnât got sense enough to think before operating his mouth? Actually believes what he says when he says it?

Glance at a small part of the record and focus on his changing his tune, not on whether you agree with a particular policy. Erratic, erratic, erratic. He was going to run out the illegals within two years, absurd but he said it. Going to put high tariffs on Mexican goods. Didnât. On Chinese goods. Isnât. Tear up the Iran treaty. Didnât. Declare China a currency-manipulator. Isnât. Ban Muslims. Hasnât. Promote good relations with Russia. Isnât. Get the US out of Syria. Ha. Make NATO pay for itself. Isnât. The man has the steely determination one associates with bean curd. You cannot trust anything the man says.

Having been reprogrammed as a good neocon, bombing places he promised to get out of, looking for a fight with Russia, he is now butting heads with Fat Thing in North Korea. He his said things closely resembling, âWe have run out of strategic patience with the North. If nobody else will take care of it, we will.â Grrrr. Bowwow. Woof.

The problem with growly ultimata made for television is that somebody has to back downâthat is, lose face and credibility. If Trump had quietly told Fat Thing, âIf you crazy bastards scrap your nuke program, we will drop the sanctions,â it might have worked. But no. Negotiations would imply weakness. Thus an ultimatum.

Kim Jong Il, or Il Sung Jong, or whatever the the hell the latest one of them is called, shows not the slightest sign of backing down. So does the Donald start an utterly unpredictable war, as usual in somebody elseâs country, or does he weasel off, muttering, and hope nobody notices?

Fredâs Third Law of International Relations: Never butt heads with a country that has a missile named the No Dong.

Many of us favored Trump, slightly daft though he was, because he wasnât yet Hillary, wasnât yet a neocon robot, and didnât want war with every country he had heard of, apparently meaning a good half dozen. At least he said he didnât, not yet having been told that he did. In particular, he didnât want war with Russia. But when the neocons control the media and Congress, they can convince a naive public of anything and, apparently, the President.

Why is the Hillarification of Trump important? The necessary prior question: What is the greatest threat to the neoconsâ American Empire? Answer: The ongoing integration of Eurasia under Chinese hegemony. The key countries in this are China, Iran, and Russia. (Isnât it curious that, apart from the momentary distraction of North Korea, these countries have been the focus of New Yorkâs hostility?) In particular if Russia and, through it, China develop large and very profitable trade with Europe, there goes NATO and with it the Empire.

Thus the eeeeeeeeeeek! furor about Russia as existential threat and so on. Thus sending a few troops to Baltic countries to âdeterâ Russia. This was theater. The idea that a thousand garrison troops can stop the Russian army, which hasnât gone silly as ours has, on its doorstep is loony.

Hillary was on board with the Russia hysteria and the globalization and the immigration and so on. Trump could have screwed the whole pooch by getting along with Russia, so he had to be reconfigured. And was. A work in progress, but going well.

Too much is being asked of him. One man cannot overcome the combined hostility of the media, the political establishment, the neocons, the myriad other special interests that he has threatened. Mass immigration is a done deal. China develops and America, already developed, cannot keep up. The country disintegrates socially. Washington, always depending on war and its threat, faces a new world in which trade is the weapon, and doesnât know what to do. The culture courses. The world changes.

Yet if only Trump showed some sign of knowing what he is doing, and could remember from day to day, if only he realized that wars are more easily started than predicted, if only he were not becoming an unbalanced Hillary.

Yet, apparently, he is.