Let us look into the abyss. It will do no good.

The theft was so stupid that it demands explanation. It was too stupid for stupidity to be responsible They did not need to steal. They were pampered babies of semi-pro basketball, infinitely privileged. They are not expected to meet academic standards, to study, or be able to read. Something other than conventional stupidity must be involved. Is it that blacks, as various psychologists have said, lack impulse control, cannot readily envision the future? I donât know. It fits, though. 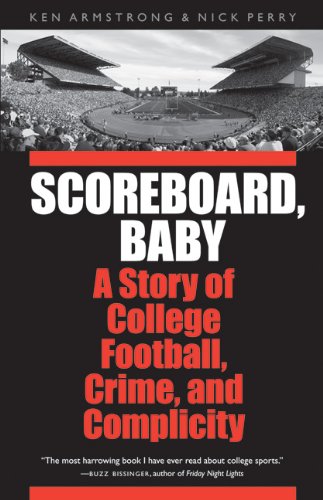 There is a curious pattern here. Scoreboard Baby is a book tracking the careers of black football players at the University of Washington. UW is a big-time football school and these players were on track to be millionaires in the NFL. Yet their record in the university is one of rape, armed robbery, assault, wife-beating, endlessly repeated drunk driving, drug use, and parole violation. Criminality is understandable: You want those tennis shoes, or your life is so screwed up that you just donât give a damn. These guys, with everything going for them, apparently could not control themselves even in their own interest.

But, back to the basketball players: As they awaited a decade in a Chinese slam, Donald Trumpâdrum roll, trumpetsâdrops from the sky like a thunderbolt, weaning a red, white, and blue cape. He intervenes to save three two-bit semi-literate boosters. The President of the United States acting like a starveling PD, public defender, the bottom-rung lawyers who hang around court houses in cheap suits to keep bottom-feeding crooks on the street.

Possibly I was wrong about the manner of Mr. Trumpâs arrival. Anyway, I am thinking that when he leaves office, he could start a firm, Shoplifters Redemption International and get federal outreach money.

OK, next. Baltimore has passed three hundred murders for the year. The figure is so astonishing that one almost begins to see it as like a batting average: Can they make it to four hundred? Are we doing better than last year?

You will probably have assumed hat the killers were Chinese math majors from Johns Hopkins. Right? You racist dog.

These offensive sculptures commemorate a war that Baltimoreâs cadavers, strewn about like flower petals in autumn, couldnât spell. Do you doubt this? Go into the schools of Baltimore and see how many can spell âConfederate.â Which brings us to:

Bear in mind that the schools, and their policies, are entirely under control of a black government.

It is hard to decide whether these revelations are astonishing or boring. Accustomed to such numbers by long exposure, we forget that scholastic catastrophe of this magnitude would be unthinkable in any other civilized society. Can you imagine a Baltimore in Japan? Finland? South Korea? Germany before African immigration? Ah, but Baltimore is getting rid of those oppressive statues. That will fix things.

Next: More advances in the homicide competition: Chicago, the City that Works, has hit six hundred dead! Zingo! Those pikers in Ballmer donât have a chance. There is good news, of a sort. There have been 2045 shootings in Chicago to the end of October. This comes 3.41 attempts per murder. Oh blessed inaccuracy. In poor marksmanship lies our hope.

Chicagoâs educational statistics do not differ markedly from those of Baltimore, Detroit, Newark, or New Orleans. All of these cities turn out young blacks who will have no chance at all in a techno-industrial society. Reckon this happens in Beijing?

And hopeless. Even if we believed that better schools would help, a proposition for which there is no evidence, or earlier intervention, perhaps in the womb, or special tutoring, or tweaks to self-esteem, even free Air Jordans, it would take twelve years to have effectâthe length of a high-school education. Politicians do not look beyond the next election.

Anyway, there is no point in talking about education. Blacks lack interest. Have you ever heard of a black school telling mothersâthere apparently are no fathers in what seems to have become a sprawling parthenogenetic ecosystemâto help their kids with their homework? Of black Boards of Education asking for thicker textbooks with bigger words and smaller pictures? It is semi-illiteracy by choice. We are doomed.

Next. The war goes on. We have black football players refusing to stand for the national anthem. They think that young black males are being hunted down by cops. Actually of course black males are hunting each other down in droves but black football players apparently have no objection to this. They do not themselves convincingly suffer discrimination. Where else can you get paid six million green ones a year for grabbing something and running? Maybe in a district of jewelers.

The non-standing is racial hostility to whites. The large drop in attendance of games, of television viewership, is racial blowback by whites. Millions of whites are thinking, that, if America doesnât suit them, football players can afford a ticket to Kenya. While this line of reasoning is tempting, it doesnât really address the problem and so would be a waste of time.

But what, really, is the problem?

It is one that dare not raise its head: that blacks cannot compete with whites, Asians, or Latin-Americans. Is there counter-evidence? This leaves them in an incurable state of resentment and thus hostility. I think we all know this: Blacks know it, whites know it, liberals know it, and conservatives know it. If any doubt this, the truth would be easy enough to determine with carefully done tests. The furious resistance to the very idea of measuring intelligence suggests awareness of the likely outcome. You donât avoid a test if you expect good results.

So we do nothing while things worsen and the world looks on astounded. We have mob attacks by Black Lives Matter, the never-ending Knockout Game, flash mobs looting stores and subway trains, occasional burning cities, and we do nothing. Which makes sense, because there is nothing to be done short of restructuring the country.

Regarding which: Do we really want, any of us, what we are doing? In particular, has anyone asked ordinary blacks, not black pols and race hustlers. âDo you really want to live among whites, or would you prefer a safe middle-class black neighborhood? Do your kids want to go to school with whites? If so, why? Do you want them to? Why? Would you prefer black schools to decide what and how to teach your children? Keeping whites out of it? Would you prefer having only black police in your neighborhood?â

And the big one: âDo you, and the people you actually know in your neighborhood, really want integration? Or is it something imposed on you by oreo pols and white ideologues?â

But these are things we must never think, never ask.

24 Black-On-White Homicides
May 2021âAnother Month In The Death Of White America. (And Whites Arenât Fighting Back, Unlike Tulsa 1921)
Kenn Gividen
• 170 Comments • Reply