Carolina K. Smith MD / Shutterstock.com
◄►Bookmark◄❌►▲ ▼Toggle AllToC▲▼Add to LibraryRemove from Library • BShow CommentNext New CommentNext New ReplyRead More
ReplyAgree/Disagree/Etc. More... This Commenter This Thread Hide Thread Display All Comments
AgreeDisagreeThanksLOLTroll
These buttons register your public Agreement, Disagreement, Thanks, LOL, or Troll with the selected comment. They are ONLY available to recent, frequent commenters who have saved their Name+Email using the 'Remember My Information' checkbox, and may also ONLY be used three times during any eight hour period.
Ignore Commenter Follow Commenter
Search Text Case Sensitive  Exact Words  Include Comments
List of Bookmarks

Osama bin Laden predicted long ago he would die a martyr at the hands of U.S. forces, and so it has come to pass. Americans are rejoicing that the man credited with the monstrous crime of 9/11 has been killed after a 10-year search. Neocons and far-right Republicans claim it was all thanks to the wonders of torture. President Obama crowed that Americaâs most wanted fugitive had finally âbeen brought to justice.â

If justice, the aptly named operation âGeronimoâ was of the crudest frontier type. America set itself up as police, judge, jury, and executioner. Even the Nazi leadership was given the pretense of legalism by a show trial at Nuremberg.

More thoughtful Americans may stop to ponder the quixotic drama of a single man who set out to overturn Americaâs Mideast imperium. First, will the execution of Osama bin Laden in Abbottabad, Pakistan by U.S. Special ForcesâNavy SEALs who âdouble-tappedâtwo bullets into his head at close rangeâend Americaâs long ordeal with violent extremists from the Muslim world?

Bin Ladenâs body was photographed, flown to a U.S. carrier in the Indian Ocean, then dumped into the sea, a method of body disposal favored by New Jerseyâs mafia. Washington claims this was done to observe Muslim funeral ritesâa preposterous assertion. The real reason was to prevent bin Ladenâs burial site from becoming a shrine and as a final humiliation to Americaâs most hated man.

This will inevitably lead to claims that a bin Laden double was killed while the real McCoy still lurks in Pakistanâs badlands. The Obama administrationâs initial false claims about the Abbottabad attackâthat bin Laden was armed and that he used one of his wives as a human shield, for exampleâhave damaged U.S. credibility abroad and added fuel to the fires of disbelief.

Bin Laden had been in retirement for years. He had little operational control over al-Qaeda since 2002 but remained, for a few, a potent symbol of anti-American defiance. Claims he was co-ordinating new attacks sound bogus.

Sheik Osama is not being widely mourned in the Muslim world, but the crude manner of this execution has generated more sympathy than he deserved. Already acid American-Pakistani relations will worsen as Americans denounce Pakistan for sheltering bin Laden. Pakistan denies knowing he was living close to a major military academy. This leaves Islamabad having to admit it was either inept or lying.

This writer had long maintained that bin Laden was hiding in Pakistan with at least some knowledge on the part of ISI, Pakistani intelligence. ISI was purged at the demand of the U.S. after 9/11. But some of its most secret units remained active and may have provided refuge for bin Laden. The reason: bin Laden remained a hero to Afghanistanâs Pashtun majority, Pakistanâs traditional allies. Indeed, itâs possible Pakistan was keeping bin Laden âon iceâ for use in Afghanistan if and when the U.S. withdrew.

The U.S. is slowly losing its Afghan War, and there are already rumbles it will abandon ship. The conflict costs at least \$1 million per annum for each U.S. soldier in Afghanistan. Bin Ladenâs demise may make a pullout easier.

Yet it is most unfortunate that bin Laden was so bluntly rubbed out. If he could have been taken alive, the co-founder of al-Qaeda should have been brought to the United States to stand trial in New York City, or, failing that, on a military baseâbut with lawyers and a civilian jury under full U.S. law.

Washington has never made public the evidence of its claim that Osama bin Laden was behind the 9/11 attacks or that al-Qaeda was more than a tiny anti-American outfit. Polls show that fully a third of American respondents believe that the U.S. government and/or Israel was behind 9/11. Eighty percent of respondents in the Muslim world share this view. An open trial in the U.S. or at the Hague would have exposed these claims to the light of day.

One point I want to set to rest: based on my long experience in Afghanistan and Pakistan and with jihadi groups and bin Ladenâs mentor and guide, Sheik Azzam, I can say with a high level of assurance that bin Laden never worked with the CIA, as has been often claimed. They were merely on the same side during the anti-Soviet struggle. Bin Laden did, however, maintain close contacts with Saudi intelligence.

The only involvement I saw between the CIA and bin Laden was in his training of Uighur jihadis destined to fight China for a Uighur homeland of Turkestan (Chinaâs Xinjiang Province). The Uighurs were to be unleashed against China by the CIA in the event of a Sino-U.S. conflict.

In 2001, there were 5,000-7,000 foreign fighters in Afghanistan. Most had come to help the Taliban fight Central Asian communists or join other jihadist causes. They were not part of al-Qaeda. But Washington called them all terrorists.

Contrary to Bush administration claims, most of bin Ladenâs âterrorist training campsâ in Afghanistan were being run under the aegis of Pakistanâs ISI to train Pashtun and Kashmiri militants to fight in the Indian-ruled portion of Kashmir. The second largest number of militants were Uzbeks, whom Osama was organizing to fight against the brutal Marxist regime of Uzbekistan, one of the worldâs worst human-rights violators.

A big question now is what justification Washington will come up with to keep 150,000 Western troops in Afghanistan. Hunting down bin Laden was, remember, the primary reason for sending U.S. troops to that remote nation. No doubt the Taliban and its leader Mullah Omar will be morphed by the media into bin Laden stand-ins. On the brighter side, perhaps bin Ladenâs death will be used by President Obama to proclaim âmission accomplishedâ and withdraw U.S. forces after some sort of deal with the Taliban.

But what of al-Qaeda? This extremist group was never more than 300 men in 2001. Today, the core al-Qaeda in Pakistan consists of a handful of hunted men. CIA chief Leon Panetta recently stated that there were something less than 20-50 al-Qaeda members in Afghanistan. There may be a hundred in Pakistanâall on the run. The computer files found by Navy SEALs in bin Ladenâs residence will likely shorten their lives.

All along, Western media and the Bush administration wildly exaggerated the menace, strength, and reach of al-Qaeda, panicking Americans into believing, as political analyst Kevin Phillips wrote, that suburban soccer moms in the deepest Midwest were the groupâs next target and Osama bin Laden was coming for their kids.

The specter of al-Qaeda provided a handy reason to secure strategic territory next to Central Asian oil, keep China out of that region, and double spending on arms. The invasion of oil-rich Iraq was also justified by patently false White House claims that Saddam Hussein was in cahoots with Osama bin Laden.

Al-Qaeda âaffiliatesâ in North Africa, Arabia, Iraq, and South Asia are simply groups of local militants who have taken the al-Qaeda brand name without having many organic or communications links to the remnants of the core al-Qaeda in Pakistan. They are more a dangerous local nuisance than an existential threat.

Al-Qaedaâs number two, the Egyptian Ayman al-Zawahiri, remains at large and is now titular head of what remains of the organization of which he has been operations chief for many years. Dr. Zawahiri, who was brutally tortured in Egypt, is a dangerous extremist with much blood on his hands and a lust for revenge, but he has neither jihadist charisma nor a following in the Muslim world.

Bin Laden is dead, but in a sense bin-Ladenism lives on. We must remember that Osamaâs oft-stated primary goal was to end Western domination of the Muslim world and exploitation of its resources. The Western-backed dictators, generals, and kings that ruled the Muslim world as overseers for foreign interests had to be overthrown. Western targets were only of secondary importance.

The Muslim world totally rejected bin Ladenâs bloody-mindedness and his utopian zeal for a reborn Islamic Caliphate. But many of its people, notably younger ones, embraced his calls for revolutions to liberate the region from brutal, corrupt, Western-supported dictatorships. Hosni Mubarakâs Egypt perfectly fit this description.

Back in 2001, I called Osama bin Laden, âChe Guevara in a turban.â He lived long enough to see the revolutions that he helped ignite burst into towering flames. In this sense, bin Ladenism may prosper and spread, enhanced by the image of Osama the martyr revolutionary.

But in many other ways, the revolution now sweeping the Arab worldâand perhaps soon the larger Muslim worldâwill leave bin Ladenâs narrow, outdated Wahhabist worldview behind and develop new philosophies. Still, he helped light the fuse.

The Saudi revolutionary leaves another legacy that most Americans have yet to understand. He repeatedly asserted that the only way to drive the U.S. from the Muslim world and defeat its satraps was by drawing Americans into a series of small but expensive wars that would ultimately bankrupt them. âBleeding the U.S.,â in his words. The United States, first under George W. Bush and then Barack Obama, rushed right into bin Ladenâs trap.

Today, the nearly insolvent United States is spending hundreds of billons annually waging small wars in Afghan istan, Iraq, Somalia, Yemen, Libya, and the Sahara. The Congressional Budget Office reports that an astounding \$1.28 trillion has been spent on the so-called War on Terror. Grotesquely overblown military outlays and debt addiction are crippling the United States and undermining its global power. That may be the most pernicious legacy of the man who thought he could defeat the United States.

Eric S. Margolis is the author of American Raj: Domination or Liberation. 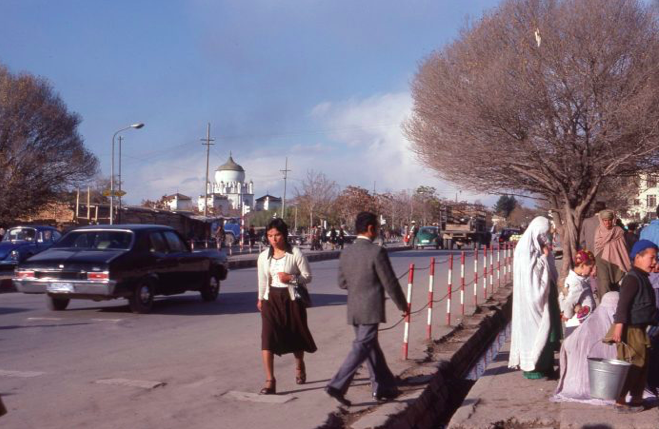 Afghanistan: Before and After US Intervention
â...the FBI has no hard evidence connecting bin Laden to 9/11.â
John Ryan
• 82 Comments • Reply How Did the Perpetrators Do 9/11?
All it takes is a government conspiracy
Philip Giraldi
• 326 Comments • Reply Afghanistan: the Victory That Wasn't
Far from being a model for a “liberated” Iraq, Afghanistan shows how the U.S. can get bogged down Soviet-style.
Eric Margolis
• 1 Comment • Reply
Translate?
URL Link
Current Events
Newslinks • 6 Today
Featured Articles