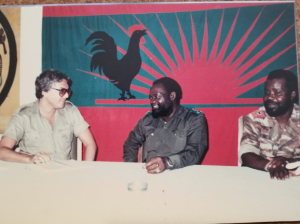 Eric with Gen.Jonas Savimbi and Chief of Staff at UNITA HQ during battles of Mavinga and Cuanavale

Thirty years ago this week began the largest and longest series of battles in southern Africa and a key event in the Cold War.

I was there with both mechanized and artillery units of the South African Defense Forces (SADF) and guerrillas of their Angolan ally, the UNITA forces of Gen. Jonas Savimbi.

Much of the action took place in the vast scrublands and dense bush of eastern Angola, a region so remote and uncharted that its former Portuguese colonial rulers rightly called it, âthe land at the end of the earth.â Great herds of majestic elephants roamed the area.

Savimbi was the most interesting African leader I had met. A brawny, charismatic man sporting a Che Guevara style black beret, he had graduated from Moscowâs Lumumba University, and then founded UNITA, the Movement for the Total Union of Angola. He was southern Africaâs most able leader. Closely aided by small contingents of tough South African troops, their black Buffalo Battalion allies, and a lot of discreet aid flown in from the top secret CIA base at Kamina, the Congo.

Opposing Savimbi was the Communist-led MPLA movement which was armed, financed and led by Angolan Communists taking orders from Moscow and East Berlin. Fidel Castro sent 50,000 well-trained Cuban troops to spearhead MPLAâs advance onto UNITAâs bush HQ at Jamba. I spent days at Jamba with Savimbi who was highly intelligent and a self-professed democrat.

We endured hair-raising, bone-jarring rides across the bush in Toyota Land Cruisers to attack Communist positions. Locals called it, âbundu (bush) bashing.â We were choked by thick dust and lashed by wicked thorns.

Heavily armed Angolan and Cuban units, with modern T-54/55 and T-62 tanks tried to fight their way across the Lomba River to attack Jamba. There, Moscowâs forces were stopped by UNITA and teams of South African commandos using new anti-tank missiles and US Stinger missiles.

I remember being in a South African light armored car, known as a Ratel, in a terrifying point blank battle with a Cuban tank. Fortunately, the trees were so dense it could not traverse its turret gun.

But the United States and Britain also had a change of heart about Africa after a great public clamor over apartheid and slowly ended their support of the whiteârun republic. Angola remained in Communist hands, as did the new state of Namibia. Moscow and Washington called a truce over southern Africa, though Fidel Castro hailed himself as its âliberator.â

My old friend Gen Savimbi continued to lead his Ovimbundu people and UNITA against the ruling Marxist regime in Luanda until the US government determined that Angolaâs growing oil resources were worth more than old ally Savimbi.

I have on impeccable source that in 2002 the US hired a top-notch Israeli hit team to ambush and kill Savimbi. UNITA disbanded and the US got Angolaâs oil. As the British say, there are no permanent friends in politics, only permanent interests.

Do Colored People Exist if There Are No White People to Observe Them?
Razib Khan
• 122 Comments
← Trump's Kool-AidThe Soviet Union Defeated Germany in Wo... →
Hide 15 CommentsLeave a Comment
"A Salute to Gen. Jonas Savimbi"
• 15 Comments
Commenters to Ignore
Commenters to ignore (one per line)