The Volkswartbund no longer had any supporters in the government since Wuermeling stepped down from his cabinet post as result of the Spiegel affair.[221] When the 82-year-old Cardinal Frings retired from his position as archbishop of Cologne in February 1969 because of old age, the Volkswartbund lost its most influential clerical supporter. The Volkswartbund had even become an object of ridicule in the Cologne chancery office and became less and less successful. It was now only a matter of time before the Church abandoned it.

In August 1969, six months after Fringsâ retirement, the time had come. âThe Volkswartbund should close its doors,â wrote Secretary General Weyer in a hand-written note. His five-page letter to the organizationâs members was an expression of the crisis mentality which pervaded the churchâs attempt to restructure the organization. âWith your help we can re-structure the Volkswartbund into a new organization, from one which is no longer perceived as a relic of more inhibited times into one which can become an instrument which has spiritual and cultural power in a transformed society to serve the needs of his neighbor and bring about new opportunities for self-fulfillment.â Weyerâs pathetic call for help betrayed how isolated the Volkswartbund had become. He put into words what was rumored in many clerical circles. The German Bishops Conference was distancing itself from its own legion of decency. As a first step in that direction, the organization got re-named as the âCentral Committee for Sexual Ethics and Social Hygieneâ and at the same time got merged with the government agency Operation Protect our Youth. The Volkswartbund continued for a while longer under a different name, but it was now unnoticed by the public. Then, in May 1975, it disappeared completely when it became part of the youth ministry known as the Catholic Social Ethics Workshop in Hamm.

The moral crusaders simply could not keep up with the political power which had accumulated as the erotic industry took in more and more of the money which came from the exploding prosperity that characterized these years. Wages had doubled since the early â50s. Economic growth, Industrialization, Individualism, democracy, science, and consumerism were all considered part of modernity. The boom in the eros market was a symptom of the same social configuration. The notion of liberation from obsolete value concepts and state paternalism were closely linked to the certainty of progress and the enthusiasm for self-indulgence. The new sexual order was based on an understanding of enlightenment, rationality, and the liberal principles of self-determination and free decision making. According to this new understanding, sexuality was the driving force behind social progress. The sex boom was a sign of this emancipated mentality. New possibilities for consumption were reflected in the sense that a new day was dawning and that sensuality and confidence in making new social arrangements was part of it. A consumption oriented modern society, according to this assumption, must necessarily work for the overthrow of outdated notions of morality.[222]

With the Fanny Hill ruling the courts changed the guidelines in legal dealings with morally objectionable publications, and the term âfilth and smutâ disappeared.[224] It fell to the judicial branch of government, not the executive or the legislative branches, to determine the norms when it came to obscenity. The politicians had nothing to say. Karlsruhe decided that it was not the business of the law to propose sexual norms for the adult population. From now on it was up to each individual to determine norms when it came to sexuality. The state needed to get out of the business of the determination and control of sexual morality. This meant the end of âSittlichkeitâ as the determining principle of what is and what should be.[225] The protection and self-realization of the individual now became the central social goal of government. The state now organized itself as a social welfare agency rather than the agency which regulated the sexual morality of its people. According to a press release issued by the court: âThe understanding of what is harmful and the boundaries of tolerance toward it . . . is a function of the times and therefore subject to change. . . . The court cannot rule in the interests of liberal or prudish groups but it cannot overlook the fundamental changes in attitude which have taken place in the recent past. This change has decreed that sexuality as a fundamental human problem must be viewed openly and discussed in a factual manner, and as a result these discussions can no longer be considered obscene according to the definition proposed by Paragraph 184, as long as this discussion isnât crude or calculated to arouse passions and thereby seriously endanger community standards.â[226]

The federal censorship board responsible for protecting the morals of young people now had to remove Fanny Hill from its index of forbidden books and admit, in spite of all earlier assertions to the contrary, that the book was a literary masterpiece. Der Spiegel praised the decisiveness of the Karlsruhe court. Federal Attorney Max Kohlhaas praised the ruling, declaring âThe state has no right to determine what an adult can read.â Kohlhaas told the press that the battle between the Volkswartbund and Freedom was from now on to be decided in favor of the latter.â 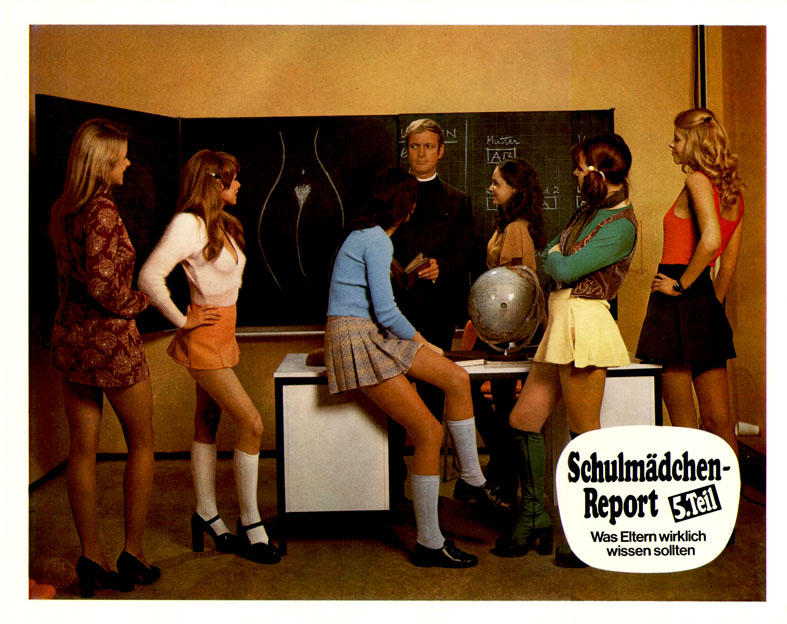 One year after the Karlsruhe verdict, the first Schulmaedchen Report arrived in movie theaters across Germany in 1970. The film began with scientists discussing adolescent problems with concerned parents, followed by opinion polls conducted in the streets but soon degenerated into soft-core skits of naked teenagers having sex. But the Report films were more than that. Each skit involved a calculated attempt to ridicule all authority figures, from teachers to clergymen, and in adding this element to what were otherwise T & A films, the clammy hand of the social engineer became apparent. [â¦]

The Rise and Fall of Conservatism in Michigan
E. Michael Jones
• 120 Comments • Reply