In an attempt to regain control over the conventional narrative, Notre Dame university has collaborated on a documentary film on the life of Father Theodore M. Hesburgh, C.S.C., the man who occupied the office of president for the longest period in that universityâs history. In spite of all of the material which has appeared on Hesburgh over the final 30 years of his life, the script was pretty much taken whole cloth from Hesburghâs autobiography God, Country and Notre Dame. 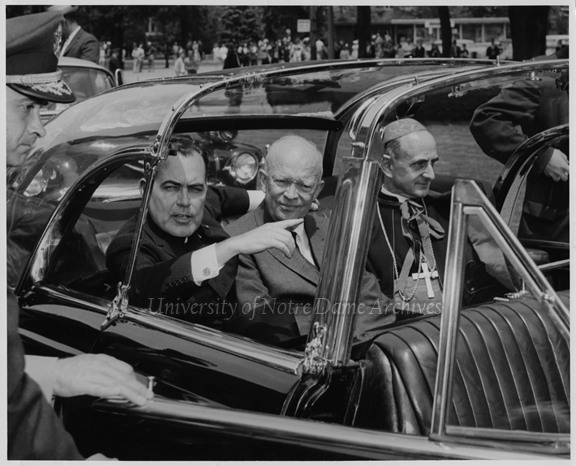 So, according to Hesburghâs account of his own life, he came from a pious family in Syracuse, New York, met a Holy Cross priest, got ordained in 1943, wanted to be a Navy chaplain during World War II, was told to get a doctorate instead, joined the theology department at Notre Dame and then became that universityâs president for the next 35 years. During that period of time, he became a courageous fighter for academic freedom, at least according to his own account. He established this reputation early on when he stood up to Alfredo Cardinal Ottaviani by refusing to remove an essay by John Courtney Murray from an anthology published by Notre Dame press. We now know that John Courtney Murray was collaborating closely with Henry Luce, head of the Time/Life publishing empire, and the CIA through C.D. Jackson who worked for both Time and the CIA simultaneously. True to Hesburghâs self-serving autobiographical account, the film portrays Hesburgh as a courageous underdog, standing up to a tyrannical church, when in fact it was Ottaviani who was the underdog in this fight.

Not long after the death of Pope Pius XII, Ottaviani went to the newly elected Pope John XXIII asking him to call an ecumenical council to address the crisis of governance which had become apparent during the last years of Pius XIIâs reign. Ottaviani also felt that the Church had to address the new geopolitical situation which had emerged after World War II, in which the Church was confronted simultaneously with the threat of Communism, while gradually awakening to the fact that the Luce and Jacksonâs anti-Communist crusade, with the help of John Courtney Murray and the Jesuits, had created an Americanist fifth column within the Catholic Church.

Emboldened by the fact that his act of insubordination went unpunished, Hesburgh then sought out the financial help of Americaâs big foundationsâFord, Rockefeller, and Carnegieâwho, up until this point in time, had refused to give any money to Catholic institutions, something that came out in the Reece report in the mid-1950s. Having shown that he was willing to turn on the church to serve oligarchic interests, Hesburgh was soon granted access to big foundation money, but, as we have come to expect, there were strings attached. Because he who pays the piper calls the tune, the foundations were now able to use Hesburgh to remove faculty members who did not support the oligarchic point of view when it came to fields such as economics. Stanley Parry was shown the door along with other professors in the economics department, and he died shortly thereafter of a broken heart. At least that was how the late publisher Henry Regnery related the story to me. Regnery attended Parryâs funeral. When Hesburgh came up to him at the funeral to say how much Parry would be missed, Henry said to himself and to me years later (but not to Hesburgh at the time), âYeah, because you killed him.â[â¦] The Purge in Propaganda and Reality
Gregory Hood
• 91 Comments • Reply
← The Only Way Out of Poverty in Africa: ...Is Christian Anti-Semitism Responsible ... →
Current Commenter
says:
Current Date at Time Now
Leave a Reply - Comments on articles more than two weeks old will be judged much more strictly on quality and tone
Cancel Reply
Commenting Disabled While in Translation Mode