Vietnam has largely dropped out of sight since the Communists won a bloody North-South civil war in 1975. But, with a population of 93 million, it has hardly gone away.

Now it is in the news again thanks to Noble, an acclaimed new movie. Directed by Stephen Bradley and starring Deirdre OâKane, Noble is a biopic that follows the progress of Christina Noble, a visionary Irish woman who has made a lifeâs work of alleviating Vietnamâs child poverty. She began her good work in 1989 in Ho Chi Minh city, the former Saigon, which had been the capital of American-backed South Vietnam, and remains Vietnamâs largest city (though Hanoi, capital of the former North Vietnam, is now capital of the unified nation).

When she first arrived in the late 1980s living conditions were about as miserable as they get in any Third World dystopia. Desperately ill mothers fed their babies from diseased breasts. The poor routinely defecated in the streets. A huge pedophilia industry openly catered to planeloads of foreign sex tourists.

Christina Noble quickly mobilized her considerable powers of persuasion and soon had pledges from various foreign donors to establish a new foundation. A generation later her foundation has helped provide a better start in life to hundreds of thousands Vietnamese children.

Of course, the efforts of people like Noble can only go so far. If the problems are to be permanently remedied, Vietnam needs to find the will within itself to build a better future. In some ways the odds seem good. After all it is a Confucian nation that shares much culture with nations like Japan, Korea, Taiwan, China and other earlier participants in the Confucian renaissance.

According to Jonny Edgebrook, who speaks for Christina Noble on such matters, Vietnam has made significant progress since the 1980s. And certainly there is some independent evidence that it has been doing better than many of its neighbors.

One indicator is the U.S. State Departmentâs annual report on human trafficking. Although Vietnamâs showing has never been exemplary, in recent years it has had a better record than such supposedly more advanced nations as Malaysia and Thailand. Then there is the evidence of Vietnamâs economic fundamentals. These indicate that though Vietnam is no China, which has a considerable record of delivering upside surprises, it has been doing considerably better than India, that supposed âeconomy of the futureâ that mostly is still stuck in the past.

The evidence of economic statistics is revealing. Vietnam has increased its exports nearly 150-fold since the late 1980s. It thus massively outperformed not only Indiaâs mere 30 times but Chinaâs 39 times. To be fair I should point out that Vietnam was starting from a low base but its performance was still impressive by any standard.

The evidence of per-capita income is also noteworthy. At last count Vietnamâs per-capita income was $5,600, which means it has broadly caught up with Indiaâs $5,800, though it, of course, trails far behind Chinaâs $12,900. By comparison the Vietnam of the late 1980s had a per-capita income of less than $200. The figure for India meanwhile was already then $290 and for China fully $320. In closing the gap with India, Vietnam has multiplied its per-capita income 28 times versus just 20 for India. (All these figures are calculated on a purchasing power parity basis as recorded in the years concerned â in other words no adjustment is made for inflation in the interim.)

A reasonable guess is that although Vietnam is no China, it is no India either. With luck it will continue relatively rapidly to bootstrap its way out of the Third World.

The Christina Noble Foundation can be contacted at www.cncf.org.

(Republished from Forbes by permission of author or representative)
← The Brave Nation That Walmart Made: ..."FIFA Methods" Used to Choose... →
Follow @FingletonTokyo

China, Number One Economic Power for Half Decade, Dashes On
Ignorance or Denial by the U.S. Poses Grave Dangers
John V. Walsh
• 196 Comments • Reply
← The Brave Nation That Walmart Made: ..."FIFA Methods" Used to Choose... →
Current Commenter
says:
Current Date at Time Now
Leave a Reply - Comments on articles more than two weeks old will be judged much more strictly on quality and tone
Cancel Reply 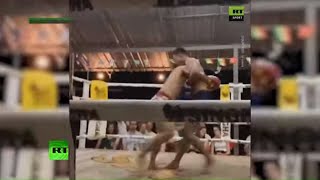