OK, we need to talk about fascism. Not just any kind of fascism. A particularly insidious kind of fascism. No, not the fascism of the early 20th Century. Not Mussoliniâs National Fascist Party. Not Hitlerâs NSDAP. Not Francoist fascism or any other kind of organized fascist movement or party. Not even the dreaded Tiki-torch Nazis.

Itâs the other kind of fascism we need to talk about. The kind that doesnât come goose-stepping up the street waving big neo-Nazi flags. The kind we donât recognize when weâre looking right at it.

Itâs like that joke about the fish and the water â¦ we donât recognize it because weâre swimming in it. Weâre surrounded by it. We are inseparable from it. From the moment we are born, we breathe it in.

We are taught it by our parents, who were taught it by their parents. We are taught it again by our teachers in school. It is reinforced on a daily basis at work, in conversations with friends, in our families and our romantic relationships. We imbibe it in books, movies, TV shows, advertisements, pop songs, the nightly news, in our cars, at the mall, the stadium, the opera â¦ everywhere, because it is literally everywhere.

We (i.e., Americans, Brits, Europeans, and other citizens of the global capitalist empire) get up in the morning, go to work, shop, pay the interest on our debts, and otherwise obey the laws and conform to the mores of a system of power that has murdered countless millions of people in pursuit of global-hegemonic dominance. It has perpetrated numerous wars of aggression. Its military occupies most of the planet. Its Intelligence agencies (i.e., secret police) operate a worldwide surveillance apparatus that can identify, target, and eliminate anyone, anywhere, often by remote control. Its propaganda network never sleeps, nor is there any real way to escape its constant emotional and ideological conditioning.

The fact that the global capitalist empire does not call itself an empire, and instead calls itself âdemocracy,â doesnât make it any less of an empire. The fact that it uses terms like âregime changeâ instead of âinvasionâ or âannexationâ makes very little difference to its victims. Terms like âsecurity,â âstability,â âintervention,â âregime change,â and so on are not meant for its victims. They are meant for us â¦ to anesthetize us.

Now, letâs be clear about this âregime-changeâ business. Weâre talking about invading other peopleâs countries, and orchestrating and sponsoring coups, or otherwise overthrowing their governments, and murdering, torturing, and oppressing people. Sending in terrorists, death squads, and such. We have organizations that train guys to do that, i.e., to round people up, take them out to the jungle, or the woods, or wherever, rape the women, and then summarily shoot everyone in the head. We pay for this kind of thing with our taxes, and our investments in the global corporations that our militaries and intelligence agencies serve. We know this is happening. We can google this stuff. We know âwhere the trains are going,â as it were. 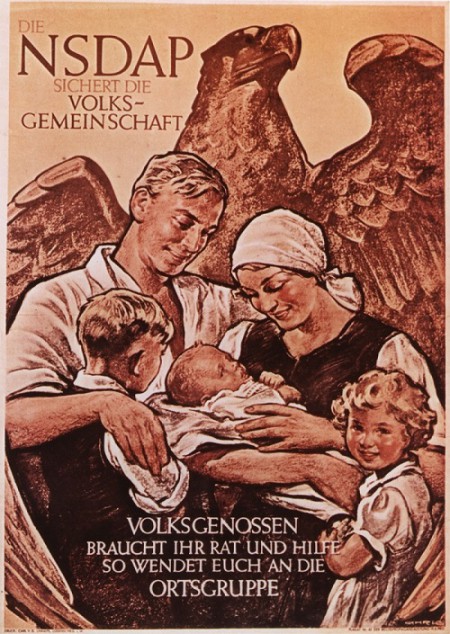 And yet, we do not see ourselves as monsters.

The Nazis didnât see themselves as monsters. They saw themselves as heroes, as saviors, or just as regular Germans leading regular lives. When they looked at the propaganda posters which surrounded them (as the Internet surrounds us today), they didnât see sadistic mass-murderers and totalitarian psychopathic freaks. They saw normal people, admirable people, who were making the world a better place.

They saw themselves. They saw âthe good guys.â

This is primarily how propaganda works. It isnât meant to fool anybody. It is there to represent ânormalityâ (whatever ânormalityâ happens to be in whatever empire one happens to inhabit). It is Powerâs way of letting us know what it wants us to believe, how it wants us to behave, who our official enemies are. Its purpose isnât to mislead or deceive us. It is an edict, a command, an ideological model â¦ to which we are all expected to conform. Conform to this ideological model, and one is rewarded, or at least not punished. Deviate from it, and suffer the consequences.

It is a question of obedience, not one of truth.

This is why it doesnât matter that there is no actual âAttack on America,â and that the Russians didnât âhack,â âsubvert,â âmeddle in,â or otherwise significantly âinfluenceâ the 2016 presidential election or otherwise put Donald Trump in office. John Brennan and the CIA say they did, and the corporate media say they did, so all Good Americans have to pretend to believe it. Likewise, it also doesnât matter if an organization like the OPCW collaborated with the empireâs regime-change specialists who staged a âchemical weapons attackâ on helpless women and children in Douma (because, no matter what the empire did or didnât do, Assad is a Russian-backed, baby-gassing devil!), or if The Guardian just makes up stuff about Julian Assange out of whole cloth and prints it as news. 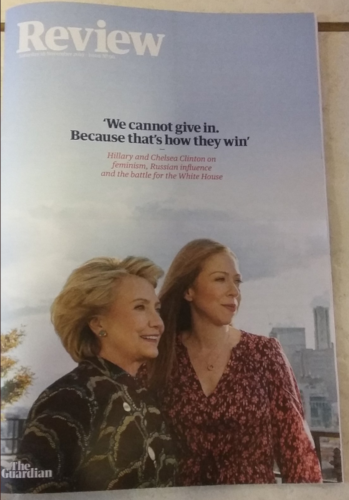 This is also why, when The Guardian runs an enormous color propaganda photo of a beneficent-looking Hillary Clinton and her soon-to-be-Democratic senator daughter posing as our last line of defense against the Invasion of the Putin-Nazis, and as the future of Western democracy, and whatever, on the cover of its cultural Review, this isnât perceived as propaganda. Never mind that this woman (i.e., Hillary) is directly responsible for the deaths and misery of God knows how many innocent people in the course of her lucrative service to the empire. Never mind that this is the same exact person that sadistically cackled on national television when the empireâs associates anally knife-raped and murdered Muammar Gaddafi in Libya, and then transformed a developed African country into a hellish human-slavery market.

For fascists (and authoritarian personalities generally), facts are completely beside the point. The point is to robotically conform to the ideology (or hysterical ravings) of whatever leader or system of power happens to be in charge of things.

Authoritarian personality types are skilled at determining exactly who that is (i.e, who is really in charge of things) and obsequiously currying favor with them. For some, this is an innate talent; others have this talent conditioned into them (or beaten into them) over the course of years. Either way, the result is the same.

Put a bunch of random people together in a group and give them a problem to solve, or a complex project or objective to accomplish. Donât give them any organizational guidance, just put them in a room and watch what happens.

The first thing that happens is â¦ a âleaderâ emerges. Someone (or a few people) decides that someone needs to be in charge of this project, and they feel pretty strongly that it should be them. If more than one such âleaderâ emerges, or if the need for a leader itself is challenged, a struggle for power will immediately ensue. The aspiring âleadersâ will compete for the support of the âfollowersâ in the group. Sides will be taken. Eventually, a âleaderâ will be chosen. Occasionally, this will happen openly, but, more often than not, it will happen unconsciously. Someone in the group will want to dominate â¦ and the rest of the group will want them to dominate. They will experience discomfort until a âleaderâ is established, and they will feel an enormous sense of relief once one is, and they can surrender their autonomy.

I assume youâre familiar with the Milgram experiment, but, if not, you should probably read up on that, and maybe read Adornoâs The Authoritarian Personality. Itâs a bit outdated, and over-focused on the Nazis (it was originally published in 1950), but I think youâll get the general idea. Once youâve done that, turn on your television, or your radio, or scan the news on the Internet, or walk down any big city street and compare the content on the digital billboards, movie posters, and advertisements to historical fascist propaganda â¦ that is, if your boss will let you leave the workplace long enough to do that, which he probably will if you ask him in that special way you have learned over time that he likes and generally tends to respond to.

Sorry, I didnât mean to get inside your mind. Thatâs kind of a fascistic thing to do.

Look, the point is, we all have an âInner Fascist,â with whom we are either acquainted or not. Iâm a playwright and a novelist, which means Iâve got a big, fat, Sieg-heiling Inner Fascist goose-stepping around inside my head. I invent whole worlds, which I dictatorially control. I put people in them and make them say things. It doesnât get much more fascistic than that. The way I see it, my art is how I sublimate my Inner Fascist, so that he doesnât run around invading Poland, exterminating the Jews, or âregime-changingâ Bolivia.

Iâm not a psychiatrist, or a fascism expert, but I figure this is probably the most we can do â¦ recognize, acknowledge, and find some way to sublimate our Inner Fascists, because, I guarantee you, theyâre not going away. (If you donât believe me, go watch that Planet Earth episode featuring the fascist chimpanzees.) Seriously, I recommend you do this. Get acquainted with your Inner Fascist, in an appropriate set and setting, of course. Give him something safe to dominate and then let him go totally totalitarian. Youâll be doing yourself and the rest of us a favor.

Ironically, it is those who are not acquainted with their Inner Fascists (or who deny they have one) who are usually the first to make a big public show of loudly denouncing âfascism,â brandishing their âanti-fascistâ bona fides, accusing other people of being âfascists,â and otherwise desperately projecting their Inner Fascists onto those they hate, and want to silence, if not exterminate. This is one of the hallmarks of repressed Inner Fascism â¦ this compulsion to control what other people think, this desire for complete ideological conformity, this tendency, not to argue with, but rather, to attempt to destroy anyone who disagrees with or questions oneâs beliefs.

We all know people who behave this way. If you donât, odds are, one of them is you.

So, please, if you havenât done so already, get acquainted with your âInner Fascist,â and find him something harmless to do, before he â¦ well, you know, starts singing hymns to former FBI directors, or worshipping the CIA, or Obama, or Trump, or Hillary Clinton, or supports the empireâs next invasion, or coup, or just makes a desperate, sanctimonious ass of you both on the Internet.

Iâm not kidding. Reclaim your âInner Fascist.â It might sound crazy, but you will thank me someday. Is BLM the Mask Behind Which the Oligarchs Operate??
Mike Whitney
• 199 Comments • Reply What Kind of "Popular Revolution" Is This?!
The Saker
• 262 Comments • Reply
← The Ministry of Wiki-TruthWorld War III →
Hide 131 CommentsLeave a Comment
"Reclaiming Your Inner Fascist"
• 131 Comments
Commenters to Ignore
Commenters to ignore (one per line)