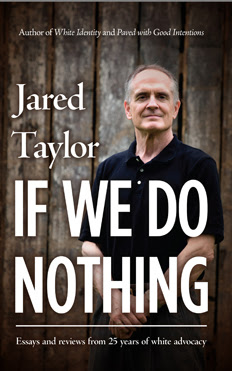 If We Do Nothing
Jared Taylor • 2017 • $22.95
The culmination of 25 years of white advocacy, If We Do Nothing is a collection of Jared Taylorâs best essays and reviews. Mr. Taylor outlines the basic truths of race realism and brilliantly dissects todayâs racial orthodoxies. The collection includes such classic essays as âThe Ways of Our Peopleâ and âAfrica in Our Midst,â as... Read More   Order Book Face to Face with Race
Jared Taylor • 2014 • $17.95
This is a book about the reality of race in America. It is a collection of 14 reports by ordinary Americans, whose conventional illusions were shattered by harsh experience. These authors have come face to face with the sobering reality that awaits us as our country ceases to have a white majority, and becomes increasingly... Read More   Order Book

White Identity
Racial Consciousness in the 21st Century
Jared Taylor • 2011 • $22.95
Ten years in the making, this book is the sequel to Jared Taylor's seminal Paved With Good Intentions. In White Identity, Taylor systematically marshals the data to show that: People of all races pay lip service to the ideal of integration but generally prefer to remain apart. Study after scientific study suggests that racial identity... Read More   Order Book 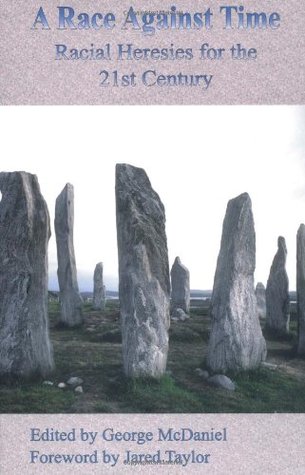 A Race Against Time
Racial Heresies for the 21st Century
George McDaniel • 2004 • $15.95
Since the 1960s, every pillar of American society has passionately supported the goal of eliminating âracism.â The belief that all races are identical or interchangeable in terms of average ability and capacity for high civilization has become the equivalent of a state religion. Nevertheless, residential neighborhoods remain nearly as segregated as they were in the... Read More   Order Book
Translate?
URL Link
Current Events
Newslinks • 9 Today
Featured Articles