Share to Gab
◄►Bookmark◄❌►▲ ▼Toggle AllToC▲▼Add to LibraryRemove from Library • BShow CommentNext New CommentNext New ReplyRead More
ReplyAgree/Disagree/Etc. More... This Commenter This Thread Hide Thread Display All Comments
AgreeDisagreeThanksLOLTroll
These buttons register your public Agreement, Disagreement, Thanks, LOL, or Troll with the selected comment. They are ONLY available to recent, frequent commenters who have saved their Name+Email using the 'Remember My Information' checkbox, and may also ONLY be used three times during any eight hour period.
Ignore Commenter Follow Commenter
Search Text Case Sensitive  Exact Words  Include Comments
List of Images
List of Tables
List of Bookmarks
ORDER IT NOW 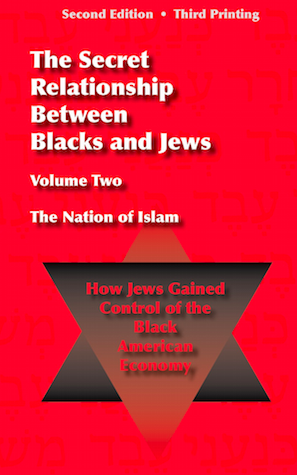 Volume Two of The Secret Relationship Between Blacks and Jews reveals that as merchants and businessmen, Jews gained much in a repressive Jim Crow society. In fact, this new book answers the provocative question, If Blacks did not receive the 40 acres and a mule, then who did?

Jews openly spoke of the benefits of scapegoating Blacks in the South, and Jewish politicians helped create and enforce the Jim Crow laws that kept Blacks from developing an economic foundation. Jews even altered the practice of their religion to accommodate the racist Southern traditions.

Jewish merchants in the post-Civil War South were leaders in the financial exploitation of the newly freed slaves, targeting the Black cotton sharecroppers and growing extremely wealthy in the process. Many notable Jewish families and institutions, including the Lehman Brothers, Neiman Marcus, and even the infamous Rothschild family of international bankers, can trace their wealth to the cotton fields of the American South.

Under Jewish leadership, AFL unions became the instrument of white working-class racism and began systematically forcing Black workers out of a variety of occupations they once dominated. Many Jewish labor officials fought for government policies that sought the total removal of Asians from American soil.

Shockingly, Jews were found collaborating with and even financing such racial terrorists as the Ku Klux Klan. Jews became Klan members and some even supplied the Klan with guns, sheets, and hoods. When lynchings and massacres occurred in America, Jewish leaders often praised those outrages, and some in the Jewish press cheered them on.

Order It Now
Tweet
Reddit
Share
Share
Email
Print
More
• Category: History, Race/Ethnicity • Tags: Blacks, Jews
Also by this author
Leave a Comment
Current Commenter
says:
Current Date at Time Now
For this content material, only substantive commentary that is highly topical and written in a respectful manner will be displayed by default. Off-topic or vulgar comments may be ignored.
Cancel Commenting
Commenting Disabled While in Translation Mode