Culture WAP
Robert Hampton • August 21, 2020
• 1,100 Words • 277 Comments • Reply
Conservatives rarely bemoan degenerate pop culture anymore. It was once a mainstay for Bill OâReilly and other pundits to lambast the depravity and violence in popular music and film. Thatâs mostly disappeared with the advent of Twitter. Conservatives love to share how they like the latest rap album or gore-drenched prestige TV show. Itâs now... Read More

The World the Civil Rights Movement Wrought:
Caldwell's THE AGE OF ENTITLEMENT
Robert Hampton • February 3, 2020
• 1,700 Words • 1 Comment • Reply
The 1960s forever transformed America. Race relations, sexual relations, popular culture, music, foreign policy, trust in government, and urban life were all dramatically changed. Itâs not uncommon for conservatives to lament the 60s, though few have done it as boldly and convincingly as Christopher Caldwell in his latest book The Age of Entitlement: America Since... Read More

The 1619 Project Devours Its Liberal Parents
Robert Hampton • January 28, 2020
• 2,100 Words • 171 Comments • Reply
The New York Times Magazineâs 1619 Project is the future of American education. Buffalo Public Schools announced this month that the essay series will now be mandatory for its students and other school districts are soon to follow. The news was greeted with grumbles from acclaimed historians and conservatives, who despise 1619 Projectâs attacks on... Read More

No Punishment for Anti-White Hoaxes
Robert Hampton • March 28, 2019
• 2,000 Words • 15 Comments • Reply
Jussie Smollett created the hate hoax of the year â and may suffer no consequences for it. Chicago prosecutors announced Tuesday that all charges against the black Empire star in connection with his infamous hate hoax would be dropped, and his record would be wiped clean. This sweet deal did not even require Smollett to... Read More 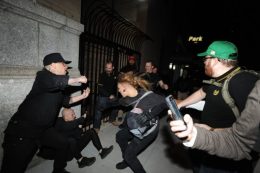 The âHate Crimeâ Against Jussie Smollett
Robert Hampton • February 5, 2019
• 1,700 Words • 154 Comments • Reply
Downtown Chicago is full of Trump-loving, ski-masked racists. At least, thatâs the assumption made by people who believe the incredible hate crime tale of Jussie Smollett. Smollett is a gay black man who stars in the popular black television series Empire. He is also a rapper. Smollett claims he was beaten in the early morning... Read More
PastClassics