Show by ⇅
Features
Print Archives198 Items • Total Print Archives • Readable Only
Books Films The American Conservative The American Enterprise The American Spectator The Atlantic Monthly Chronicles The Harpers Monthly The Nation The National Interest National Review The Social Contract
Nothing found
BlogviewPat Buchanan Archive
/
Antifa
BlogviewPat Buchanan Archive
/
Antifa
◄►Bookmark◄❌►▲ ▼Toggle AllToC▲▼Add to LibraryRemove from Library • BShow CommentNext New CommentNext New ReplyRead More
ReplyAgree/Disagree/Etc. More... This Commenter This Thread Hide Thread Display All Comments
AgreeDisagreeThanksLOLTroll
These buttons register your public Agreement, Disagreement, Thanks, LOL, or Troll with the selected comment. They are ONLY available to recent, frequent commenters who have saved their Name+Email using the 'Remember My Information' checkbox, and may also ONLY be used three times during any eight hour period.
Email Comment Ignore Commenter Follow Commenter
Is Biden Ceding the Law-and-Order Issue?
Pat Buchanan • August 28, 2020
• 900 Words • 35 Comments • Reply
Is Joe Biden forfeiting the law-and-order issue to Donald Trump? So it would seem. "Republicans Use Law and Order As Rallying Cry" was the top headline on The New York Times' front-page story on Vice President Mike Pence's acceptance speech at Fort McHenry Wednesday night. The Wall Street Journal Page One headline echoed the Times:... Read More
Will the Catholic Bishops Call Out Joe?
Pat Buchanan • August 21, 2020
• 900 Words • 83 Comments • Reply
As a cradle Catholic and recipient of Notre Dame's Laetare Medal, Joe Biden is outspoken in declaring that the principles and beliefs of his Catholic faith guide his public life. "Joe is a man of faith," was a recurring theme at the Democratic convention that nominated him to become our second Catholic president. Biden has... Read More
The Real World Reasserts Itself
Pat Buchanan • August 11, 2020
• 800 Words • 63 Comments • Reply
Since the death of George Floyd beneath the knee of a cop in Minneapolis on Memorial Day, the nation has been instructed by its cultural elites that this is the daily reality that a racist America has too long ignored Our nation, it was shouted in our faces, is a place where white cops harass,... Read More
Are Uncivil Protests and Mob Violence Winning?
Pat Buchanan • July 3, 2020
• 900 Words • 73 Comments • Reply
The Seattle Commune is no more. Declared three weeks ago by radical leftists as CHAZ, the Capitol Hill Autonomous Zone, rechristened CHOP, the Capitol Hill Occupation Protest, the six-block enclave inside Seattle ceased to exist July 1. The cops shut it down. As Marx said, history repeats itself, first as tragedy then as farce. If... Read More 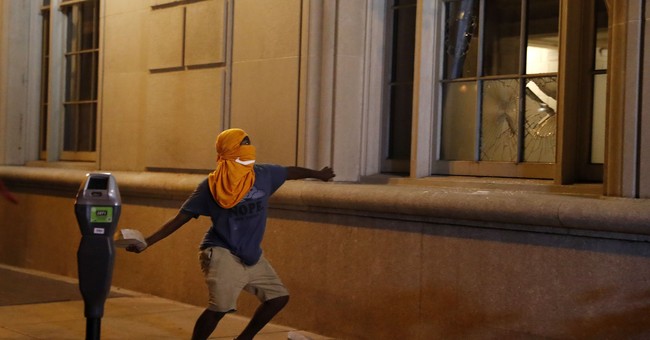 Who Truly Imperils Our Free Society?
Pat Buchanan • September 19, 2017
• 900 Words • 52 Comments • Reply
"The Barbarian cannot make ... he can befog and destroy but ... he cannot sustain; and of every Barbarian in the decline or peril of every civilization exactly that has been true." Hilaire Belloc's depiction of the barbarian is recalled to mind as the statues honoring the history and heroes of the Republic and of... Read More
If We Erase Our History, Who Are We?
Pat Buchanan • August 15, 2017
• 800 Words • 46 Comments • Reply
When the Dodge Charger of 20-year-old Nazi sympathizer James Alex Fields Jr., plunged into that crowd of protesters Saturday, killing 32-year-old Heather Heyer, Fields put Charlottesville on the map of modernity alongside Ferguson. Before Fields ran down the protesters, and then backed up, running down more, what was happening seemed but a bloody brawl between... Read More
"Antifa" Items Across Entire Archive

About Pat Buchanan
Patrick J. Buchanan has been a senior advisor to three Presidents, a two-time candidate for the Republican presidential nomination, and was the presidential nominee of the Reform Party in 2000. In his White House years, Mr. Buchanan wrote foreign policy speeches, and attended four summits, including Mr. Nixonâs historic opening to China in 1972, and Ronald Reaganâs Reykjavik summit in 1986 with Mikhail Gorbachev. Mr. Buchanan has written ten books, including six straight New York Times best sellers A Republic, Not an Empire; The Death of the West; Where the Right Went Wrong; State of Emergency; Day of Reckoning and Churchill, Hitler and The Unnecessary War. Mr. Buchanan is currently a columnist, political analyst for MSNBC, chairman of The American Cause foundation and an editor of The American Conservative. He is married to the former Shelley Ann Scarney, who was a member of the White House Staff from 1969 to 1975.
PastClassics