The SEIU dumped more than $1 million into Martha Antoinette Coakley’s coffers and has nothing to show for it.

In a significant turning point for Big Labor, the “persuasion of power” thuggery of the Purple Shirts failed.

But instead of apologizing to his rank-and-file members for wasting their money (which SEIU President Andy Stern’s SEIU goons have a long habit of doing), Stern responded to the Coakley defeat by echoing Democrat Rep. Steny Hoyer and blaming GOP obstructionism.

“Today is no different than yesterday or the day before or the day before that. Pat DeJong will still wake up in Libby, Montana. Pat is still mourning the loss of her husband and the selling of his family’s ranch because of his medical bills. And, Pat will still go to the bed side of her patients each day, providing excellent care, still lacking coverage of her own,” said SEIU President Andy Stern. “Pat’s reality is the reality millions of working people face every day. One political election does not change the fact that Pat and hardworking families across this country have been asking for and deserve fundamental reforms.

“The reason Ted Kennedy’s seat is no longer controlled by a Democrat is clear: Washington’s inability to deliver the change voters demanded in November 2008. Make no mistake, political paralysis resulted in electoral failure,” Stern said.

“During the past year, Republicans refused to do anything but stand in the way of change and Democratic Senators took too long to do too little. And tonight, the Senate bears the consequences for its failure to act decisively but the American people are the ones left paying the price. If our elected officials don’t recognize that every day more working families fall victim to Washington’s failure to act, the elections next November will result in the same.

“The Senate may have squandered the trust the American people gave to Washington in 2008. But now, every member of Congress and the Administration must act with a renewed sense of purpose to show working families whose side they are on and deliver meaningful change to every American. This is not the time for timidity. It is time to show the courage and strength of conviction to move this country forward and bring working families the change they need. It starts by passing health insurance reform and giving Pat and millions of people like her the security and peace of mind they deserve.”

Someone needs to show him that Luntz focus group video.

Also, those tasty photos of rank-and-file SEIU members revolting against their leaders: (Republished from MichelleMalkin.com by permission of author or representative)
← Every Democrat Leader Needs to Watch Th...Seeing Red: Graphic of the Night -- and... → 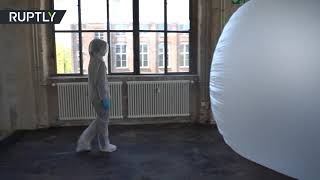