Take a look at the man on the left in this photo from CPAC 2007: 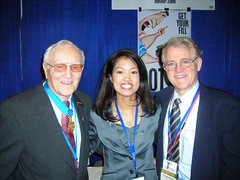 He is Col. George Everett “Bud” Day, the nationâs most highly decorated soldier since General Douglas MacArthur. It was a thrill to meet this genuine American hero in person.

Rank and organization: Colonel (then Major), U.S. Air Force, Forward Air Controller Pilot of an F-100 aircraft. Place and date: North Vietnam, 26 August 1967. Entered service at: Sioux City, Iowa. Born: 24 February 1925, Sioux City, Iowa. Citation: On 26 August 1967, Col. Day was forced to eject from his aircraft over North Vietnam when it was hit by ground fire. His right arm was broken in 3 places, and his left knee was badly sprained. He was immediately captured by hostile forces and taken to a prison camp where he was interrogated and severely tortured. After causing the guards to relax their vigilance, Col. Day escaped into the jungle and began the trek toward South Vietnam. Despite injuries inflicted by fragments of a bomb or rocket, he continued southward surviving only on a few berries and uncooked frogs. He successfully evaded enemy patrols and reached the Ben Hai River, where he encountered U.S. artillery barrages. With the aid of a bamboo log float, Col. Day swam across the river and entered the demilitarized zone. Due to delirium, he lost his sense of direction and wandered aimlessly for several days. After several unsuccessful attempts to signal U.S. aircraft, he was ambushed and recaptured by the Viet Cong, sustaining gunshot wounds to his left hand and thigh. He was returned to the prison from which he had escaped and later was moved to Hanoi after giving his captors false information to questions put before him. Physically, Col. Day was totally debilitated and unable to perform even the simplest task for himself. Despite his many injuries, he continued to offer maximum resistance. His personal bravery in the face of deadly enemy pressure was significant in saving the lives of fellow aviators who were still flying against the enemy. Col. Day’s conspicuous gallantry and intrepidity at the risk of his life above and beyond the call of duty are in keeping with the highest traditions of the U.S. Air Force and reflect great credit upon himself and the U.S. Armed Forces.

The Air Force Cross is presented to George Everett Day, Colonel, United States Air Force, for extraordinary heroism in military operations against an opposing armed force as a Prisoner of War in North Vietnam from 16 July 1969 to 14 October 1969. During this period, Colonel Day was subjected to maximum punishment and torture by Vietnamese guards to obtain a detailed confession of escape plans, policies, and orders of the American senior ranking officer in the camp, and the communications methods used by the Americans interned in the camp. Colonel Day withstood this punishment and gave nothing of value to the Vietnamese, although he sustained many injuries and open wounds to his body. Through his extraordinary heroism and willpower, in the face of the enemy, Colonel Day reflected the highest credit upon himself and the United States Air Force.

Make sure you click on all those links and then be sure to leave the links in the comments section of this clueless CNN piece about Col. Day.

Why? Because you wouldn’t know about Col. Day’s extraordinary heroism if you only got your news from CNN, which falsely states in a reductionist hit job on Day: “McCain Truth Squad defender was Swift Boat Vet member.”

CNN owes a correction and an apology for its ignorance, disrespect, and the warped propaganda it disseminated about Col. Day.

The Obamedia have no shame.

And: A new logo for CNN.

(Republished from MichelleMalkin.com by permission of author or representative)
← Code Pink Tantrum of the DayEstupido: Juan Hernandez Gives Dumb Adv... →