The Rev. Al Sharpton and Pat Robertson are sitting on a couch and in walks Al Gore.

This isn’t a joke.

It’s the plot of a new commercial in the former vice president’s fight against global warming.

And it was filmed at the 57th Street beach Wednesday.

Gore and his nonprofit agency, the Alliance for Climate Protection, are pitting odd couplings – think Sharpton and Robertson – in a series of public-service announcements to draw attention to the environment. The $300 million campaign is expected to launch next week, CBS News reported. Gore talks up his views in a “60 Minutes” interview set to air Sunday.

The global issue got local Wednesday as a film crew set up scaffolding, lighting equipment and a tan leather couch on the strand, not far from the waves.

A witness said Sharpton, the grandiose civil rights voice in New York, sat on the left.

Robertson, the conservative preacher and Regent University founder, was on the right.

“It was like ‘The Twilight Zone’ seeing them sitting on the couch,” said Bill Kelly, a special events coordinator in the city’s resort office. “And then around the corner comes Al Gore.”

The public-service announcement – apparently Gore was directing – is meant to show that people who don’t agree on much can still agree that the environment is important.

CBS reported other pairings will include Toby Keith and the Dixie Chicks and Nancy Pelosi and Newt Gingrich.

No mention of this, I’m sure. Or this. Or this.

Increasingly, GOP elites are giving in to the Gore cult and abandoning the scientific process and scientific integrity for political expediency.

Those who are doing battle against the global warming alarmists are getting yanked off YouTube.

John McCain is on the eco-bandwagon.

And the enviro-nitwit-ization of the GOP is nearly complete.

Yes, the planet is indeed in peril.

(Republished from MichelleMalkin.com by permission of author or representative)
← The Hawaii Republican Party Is Doing Wh...An Indictment Against John Murtha →

A Government Against the People
Loyalty to the president is the chief qualification
Philip Giraldi
• 99 Comments • Reply
← The Hawaii Republican Party Is Doing Wh...An Indictment Against John Murtha → 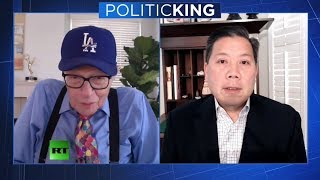