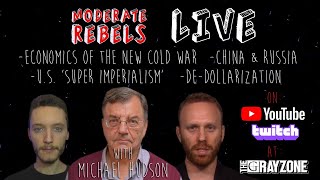 Saker Interview with Michael Hudson on Venezuela
The Saker and Michael Hudson • February 7, 2019
• 3,000 Words • 214 Comments • Reply
The Saker: Could you summarize the state of Venezuelaâs economy when Chavez came to power? Michael Hudson: Venezuela was an oil monoculture. Its export revenue was spent largely on importing food and other necessities that it could have produced at home. Its trade was largely with the United States. So despite its oil wealth, it... Read More

Trumpâs Brilliant Strategy to Dismember U.S. Dollar Hegemony
Michael Hudson • February 1, 2019
• 3,700 Words • 201 Comments • Reply
The end of Americaâs unchallenged global economic dominance has arrived sooner than expected, thanks to the very same Neocons who gave the world the Iraq, Syria and the dirty wars in Latin America. Just as the Vietnam War drove the United States off gold by 1971, its sponsorship and funding of violent regime change wars... Read More

Bloombergâs Hit Job on Venezuela â and Me
Michael Hudson • April 3, 2017
• 1,500 Words • 21 Comments • Reply
I just had a disastrous and embarrassing interaction with Bloomberg, and feel that I was ambushed and sandbagged by having my comments taken out of context in a hit piece Bloombergâs journalists wrote on Venezuela â evidently trying to distort my own views in a two-for-one job. On Monday, March 27, I received a message... Read More
"Venezuela" Items Across Entire Archive