Michael Hudson: A Roadmap to Escape the Westâs Stranglehold
Pepe Escobar and Michael Hudson • October 6, 2022
• 2,100 Words • 99 Comments • Reply
It is impossible to track the geoeconomic turbulence inherent to the âbirth pangsâ of the multipolar world without the insights of Professor Michael Hudson at the University of Missouri, and author of the already seminal The Destiny of Civilization. In his latest essay, Professor Hudson digs deeper into Germanyâs suicidal economic/financial policies; their effect on... Read More

The Coming Global Fracture as Economic Orders Clash
Michael Hudson • June 1, 2022
• 4,100 Words • 117 Comments • Reply
"Taken from an interview with the newly founded German magazine "ViER" which will be published in August 2022." ViER (FOUR), stands for the media as fourth power in checks and balances). (1.) Prof. Hudson, your new book "The Destiny of Civilization" is out now. This lecture series on finance capitalism and the New Cold War... Read More

The Ongoing Economic War
Michael Hudson • May 19, 2022
• 2,900 Words • 117 Comments • Reply
Peter Scott, RT anchor: Joining us now is Michael Hudson, economist and author of "Super-Imperialism" and the recently-published "Destiny of Civilizationâ. Welcome to the programme, Michael. Michael Hudson: Itâs good to be back. PS: Letâs say all these European programmes like the REPOWER Programme come into effect, how do you expect the EU standing to... Read More

The American Empire Self-Destructs
But nobody thought that it would happen this fast
Michael Hudson • March 7, 2022
• 2,100 Words • 302 Comments • Reply
Empires often follow the course of a Greek tragedy, bringing about precisely the fate that they sought to avoid. That certainly is the case with the American Empire as it dismantles itself in not-so-slow motion. The basic assumption of economic and diplomatic forecasting is that every country will act in its own self-interest. Such reasoning... Read More

America Defeats Germany for the Third Time in a Century
The MIC, OGAM and FIRE Sectors Conquer NATO
Michael Hudson • February 28, 2022
• 3,100 Words • 201 Comments • Reply
My old boss Herman Kahn, with whom I worked at the Hudson Institute in the 1970s, had a set speech that he would give at public meetings. He said that back in high school in Los Angeles, his teachers would say what most liberals were saying in the 1940s and 50s: âWars never solved anything.â... Read More 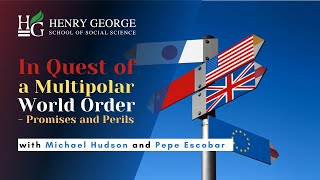 In Quest of a Multipolar Economic World Order
Michael Hudson and Pepe Escobar • March 26, 2021
• 16,200 Words • 124 Comments • Reply
TRANSCRIPT Ibrahima: [00:00:00] Good morning or good evening, depending on where you are located and welcome to the Henry George School. My name is Ibrahima Drame and I'm the director of education. It's a great honor to have you with us today for another joint webinar co-organized with the International Union for Land Value Taxation... Read More
"Eurasia" Items Across Entire Archive