Sam Francis and the Triple Melting Pot: Race vs. Religion, Part Two
E. Michael Jones • December 15, 2019
• 8,000 Words • 265 Comments • Reply
Previously Published - Part One In his first intellectual incarnation as a conservative, Sam fell under the spell of one-time Communist James Burnham, then writing for the conservative journal National Review. In retrospect, itâs difficult to ignore the materialist, if not Marxist, nature of the categories both men employed in trying to understand the hidden... Read More

Sam Francis and the Triple Melting Pot: Race vs. Religion, Part One
E. Michael Jones • December 1, 2019
• 2,000 Words • 259 Comments • Reply
It was sheer coincidence, which of course does not exist in the mind of God, that allowed me to take part in this yearâs Arbaeen march organized largely by Iraqi Shi'a in Dearborn, Michigan. My opportunity to go on the real Arbaeen pilgrimage from Najaf to Karbala in Iraq to mourn the death of Hussein... Read More 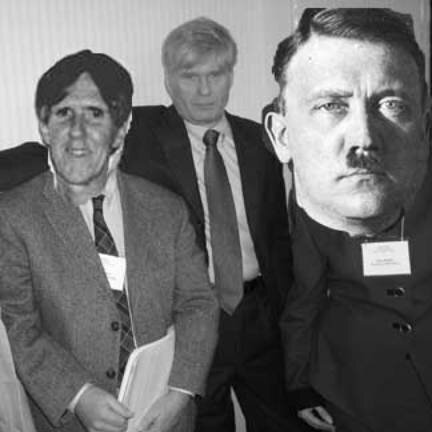 Guilt By Association
E. Michael Jones • March 25, 2007
• 6,400 Words • Leave a Comment
People love to take your picture in Washington. I was in that labyrinthine town to speak at a symposium entitled âSam Francis and Americaâs Culture War,â which had been arranged by Fran Griffin of FGF books to promote a posthumous collection of Sam Francisâs columns, Shots Fired: Sam Francis on Americaâs Culture War. As I... Read More
Francisâs Legacy - Dr. Jones' Speech at the Samuel T. Francis Memorial
E. Michael Jones • March 20, 2007
• 5,900 Words • Leave a Comment
I first met Sam Francis at a meeting of the John Randolph club in Chicago. He was sitting at a table with Tom Fleming. Both men are two years older than me. Both gave me the impression that I was a freshman trying to sit at the Junior Lunch Table in the School Cafeteria. The... Read More
"Sam Francis" Items Across Entire Archive
PastClassics