Washington's Crocodile Tears Over Ukraine's Destruction
Daniel McAdams • February 25, 2022
• 1,000 Words • 210 Comments • Reply
As of this writing, Ukrainian president Volodymyr Zelensky is hunkered down in his bunker somewhere in Kiev, as the sound of the encroaching war gets closer and closer. A grim scene, to be sure. All the US and EU kisses and roses leading up to this end have turned to dust and barbed wire, as... Read More

The New âRussiagatersâ: Right-Wingers Channel Hillary in Attacks on Biden
Daniel McAdams • February 23, 2022
• 1,200 Words • 4 Comments • Reply
"Bad" Vlad Putin only "took over" part of Ukraine because of President Biden's weakness. So says many in the US right wing. A "real man" president would have imposed costs so prohibitive that Putin would never have dreamed of recognizing what has been de facto reality since 2014: that the Russian-speaking part of Ukraine wants... Read More 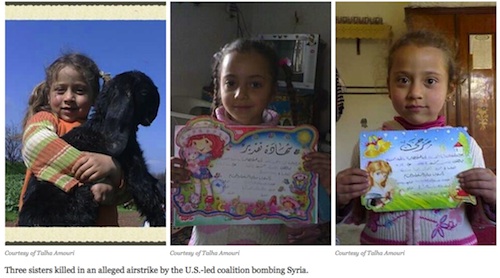 Abusing Dead Syrian Children
Daniel McAdams • September 3, 2015
• 600 Words • 2 Comments • Reply
Images are a powerful tool in the hands of propagandists. A picture is worth a thousand words, as the saying goes. If a powerful image can be manipulated to tell a tale even if false, it can persuade more viscerally than can a thousand reasoned arguments. So it is with the tragic photograph making the... Read More

The Neocon Foreign Policy Walmart
Daniel McAdams • August 30, 2015
• 800 Words • 55 Comments • Reply
One of the most depressing things about watching -- even from a distance -- the quadrennial race for the White House is seeing what passes for debate on the one area where the president does have some Constitutional authority: foreign policy. Candidates who have spent little or no time studying or traveling to the rest... Read More

Hillary's Libyan Torturers
Daniel McAdams • August 4, 2015
• 500 Words • 17 Comments • Reply
Remember when then-Secretary of State Hillary Clinton was so intent on a US attack on Libya that she disregarded the US Intelligence Community, the Pentagon, and even her colleagues in the Obama Administration to force her "humanitarian intervention"? Clinton was so distrusted by the Pentagon that they opened up their own lines of communication with... Read More

Bill Kristol on Iran Deal: 'Its Munich!'
Daniel McAdams • July 18, 2015
• 700 Words • 70 Comments • Reply
Bill Kristol is the epitome of the neocon mindset: cultivating a staid and urbane image while writing the most unhinged and mendacious claptrap. In his utterly predictable denunciation of the successful Iran nuclear talks, Kristol frames the issue in the crudest terms: if the deal goes through on the US end it will mean the... Read More
PastClassics