Steve Brown has been involved with debates at the Pacifica network for many years. He writes that Pacifica members are now being âasked to vote for new bylaws that will allow Pacificaâs stations to be sold and the network to be broken up.â He describes this as a coup by âcorporatistsâ who are trying to seize centralized control of the valuable but debt-ridden networkâ¦even as they censor such non-mainstream voices as Bonnie Faulkner and Gary Null. Below is his email.

*
Dear Friend of WBAI and PacificaâIf you are a Pacifica member, you will soon receive (today or tomorrow) an email, paper ballot or postcard (with voter credentials beneath a scratch off) that is the brainstorm of six âcorporatistâ members of the Pacifica community.

They include 3 lawyers, 2 Democratic Party hacks, and an ex-union president accused of selling out the members of his own union. In this letter (or email or postcard) there will be a ballot. And you will be asked to vote for new bylaws that will allow Pacificaâs stations to be sold and the network to be broken up.

I hope you will vote NO. 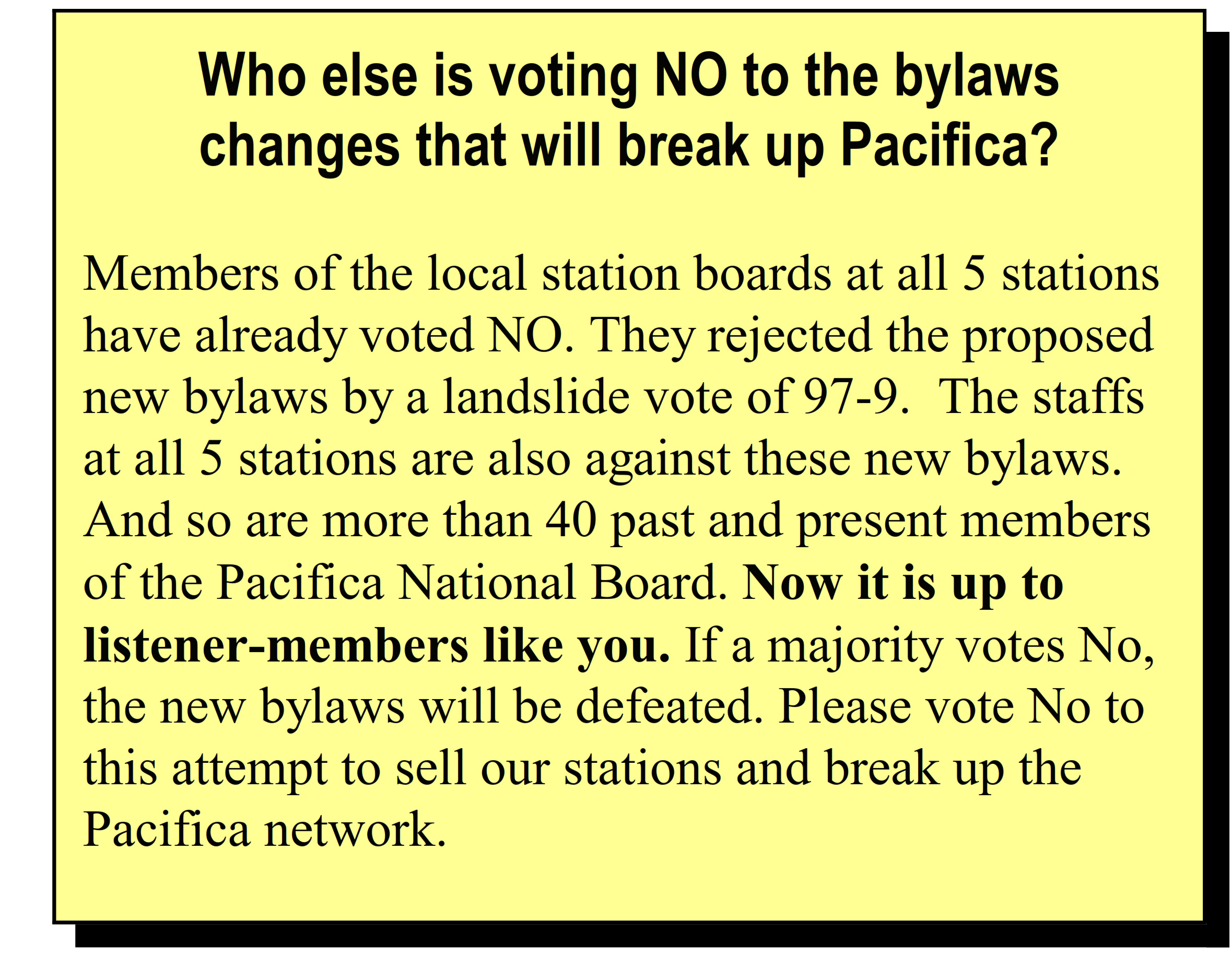 Because if you vote yes, you will permit these corporatists to accomplish the following three steps in their agenda:

(1) Abolish all Local Station Boards. This will de-democratize Pacifica and end community control of our stations. Neither listeners nor staff will any longer have a say in who runs our stations and what programs they broadcast. Our function will merely be to donate our money and keep our opinions to ourselves. In other words, pay up and shut up.

(2) Appoint (not elect) a majority of National Board members, who can never be removed. This permanent board majority will be unaccountable to anyone except themselves. They will even be able to appoint their own successors, and to terminate any radio shows they personally donât like, without consulting listeners or staff.

For example, the corporatist faction at KPFA has already terminated Bonnie Faulknerâs Guns and Butter. And they have made it clear that, as soon as their new bylaws go into effect, they will terminate Gary Null at WBAI. This faction (dominant at KPFA, but thankfully not at our other stations) is in charge of programing, and for years has been censoring any viewpoints they deem âunacceptableâ or âout of bounds,â lest they damage the delicate sensibilities of KPFA listeners. That means no questioning the official story of 9/11, the possible risks of compulsory vaccination, Israelâs brutai treatment of Palestinians, the hoax of Russiagate, the misinformation coming from Syria, or anything else that âgoes too far.â In other words, a formula for âNPR Lite.â

(3) Prohibit staff members from serving on the National Board. At least 5 staff members now serve on the national board. Under the proposed new bylaws, they will be banished. Corporatists reject the idea that workers are entitled to a voice in governing their own workplace. Henceforth, staff members will have to mind their manners. Which means learning to take orders and shut up.

(4) Sell off one or more Pacifica stations. The corporatist strategy is to sell stations. The proceeds ($100 million or more) will be used to disband Pacifica and âset KPFA freeâ â i.e., deposit a large chunk of that $100 million in KPFAâs bank account. This is what the corporatists at KPFA have been advocating for years. It is part of the public record. But now they deny it, and disguise their ultimate goal by portraying it as merely an administrative adjustment to the bylaws. For example, a detailed prescription for Pacificaâs future, written by one of the corporatistâs chief strategists â and widely circulated in 2016 â was very frankly titled, âAn Amicable Divorce.â One of its boldfaced subheads was: âThere is a solution [to Pacificaâs problems]: Break it [the network] up.

If the above fills you with dread, as it does me, please vote No when you receive your ballot. This is not an appeal for money (although we hope you will continue to support Pacifica). It is a call to arms. For if we do not act to preserve what Pacifica stands for, we do not deserve to have it.

FOR THOSE WHO WANT MORE DETAILS â¦

I donât want to give the impression that Pacificaâs existing bylaws are perfect. They are not. And they can certainly be improved (just as the U.S. Constitution can be improved). But the proposed new bylaws are no improvement. They are the final step in a 15-year-long conspiracy to break up Pacifica and sell off one or several of its 5 stations: WBAI in New York; WPFW in Washington DC; KPFT in Houston; and KPFK in Los Angeles.

But not KPFA in Berkeley/San Francisco? Why not? Because (a) that is where the plan to sell the other stations originated; (b) that is where the 6 corporatists, who thought up this bylaws plan, all happen to live; and (c) the whole bylaws strategy was engineered to give KPFA, and the corporatists who control it, a big chunk of the anticipated $100 million from the sale of the other stations. This money would be used to repair the shaky finances of KPFA. And its finances really are shaky.

How shaky? Aside from losing its listeners at a concerning rate, and padding its payroll with five to ten times as many people as other Pacifica stations, KPFA was recently hit (two weeks ago) with a devasting notice from the state of California. Apparently, one of the stationâs multitude of bustling functionaries neglected or forgot to file the past five years of documents that exempt KPFA studios and Pacifica headquarters from real estate taxes (since Pacifica is a 501c3 corporation). Which means, according to the notice, that the KPFA building and Pacificaâs headquarters were put up for auction to pay off over $300,000 in back taxes (from which it should have been exempt).

So either KPFA and Pacifica will lose their buildings, or Pacifica will have to shell out $300,000. Which for Pacifica is an enormous sum. And once it is paid, KPFA will be more in debt than ever. Therefore, it will be more desperate than ever to pass the new bylaws, so some stations can be sold and the proceeds used to rebuild its depleted finances. That is why the new bylaws were drafted to make the sale of Pacificaâs stations and the destruction of the network â not only possible â but downright easy.

However, the proposed new bylaws cannot possibly reflect the will of Pacificaâs 45,000 members. They had no hand in drafting them, no idea of what is in them, and â I believe â no intention of allowing this group of 6 conspirators to wreck Pacifica. I hope I am right, and that you will join me in voting No to the new bylaws.

Thatâs All Folks!
C.J. Hopkins
• 244 Comments • Reply
← Historian Michael Hoffman Gets Hate Mai...Nick Bryant on Franklin Scandal & Jeffr... →
Hide One CommentLeave a Comment
"Steve Brown on the Corporatist Coup at Pacifica"
• One Comment
Commenters to Ignore
Commenters to ignore (one per line)