Earlier: Is The Black-Brown Coalition Unraveling?

Immigration is one issue on which Hispanics do not speak in one voice. Contrary to Karl Rove, many donât really care for mass immigration and are even quite hostile to it. And if you put Hispanics under the microscope, youâll find that hostility increases even more when it comes to the mass immigration of blacks.

Which raises an interesting point about the complexity of race relations in America. The current fixation is, of course, black vs. white, Jim Crow, the âlegacy of slavery,â and âinstitutional racism.â But itâs worth taking a look at black vs. Hispanic, what Hispanics think of blacks, particularly immigrants, how blacks interact with other non-whites, and mass black immigration.

Those matters will be the most interesting to monitor as the country becomes less white in the following decades. In this new demographic ecosystem, blacks will be compelled to interact more with non-white immigrants and their descendants.

That does not portend a peaceful future. Black-on-Hispanic violence is epidemic. So is Black-Hispanic gang war.

Theyâre just another facet of the multicultural dumpster fire engulfing America and that will eventually require the attention of the Historic American Nation.

Maybe they know that Septemberâs surge of Haitian migrants offered a glimpse of what Africanized migration will look like in the not-too-distant future. A startling datum on that subject: 2.1 million African immigrants were living in the U.S. in 2015 [African immigration population in U.S. steadily climbs, by Monica Anderson, Pew Research, February 14, 2017]. In 1970, just 80,000 Africans were here. So in about 50 years, the population increased 2,525 percent. What was the point of this?

African immigration will likely balloon. Africa faces major population pressures in the decades to come. Sub-Saharan Africaâs population was about 1.02 billion in 2017. By 2050, it will be 2.17 billion and will continue surging to four billion, according to the United Nations. 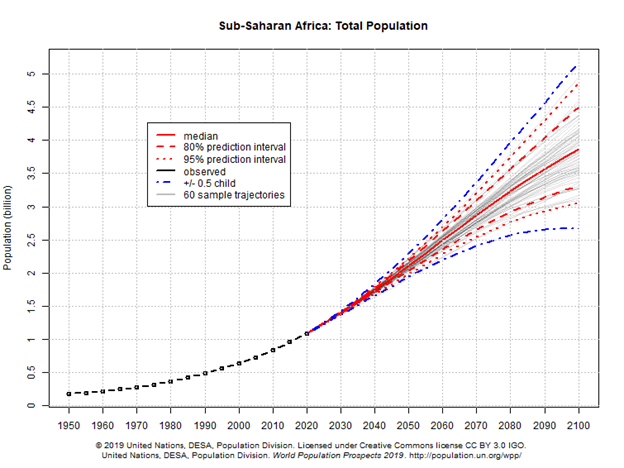 Due to Africaâs perpetual violence, political instability and wracking poverty, Africans will look for a new home. Guilt-ridden whites will help them find oneâ¦here. A treasonous white Ruling Class in the West, keen on The Great Replacement, and corrupt NGOs ready to assist in that demographic murder, are more than ready to import torrential waves of melanated migrants via ârefugeeâ programs, or simply let them cross the border illegally and give them Amnesty.

My view, as a Hispanic immigrant: Hispanics are less likely to think that âdiversityâ will be their âgreatest strengthâ than Leftist journalists assume. In fact, they might well see opportunity in an alliance with anti-immigration whites of the Historic American Nation.

Consider this: the Ruling Classâs decision to embrace mass migration and pro-black policies starting in the 1960s have brought together white Catholics and Protestantsâtwo groups that have not been on good terms for a good part of American history. That coalition is now part of the ascendant right-wing populist coalition that elected Donald Trump in 2016 and appears to be continuing to thrive [For Trump, Conservative Catholics Are The New Evangelicals, by Tom Gjelten, NPR, October 26, 2020].

Thus, given the black-white dynamic in this country, and future immigration from Africa and the Caribbean, a similar convergence of interests between whites and Hispanics, and then an alliance, could be in its embryonic stages.

Despite what the Spanish-speaking media in the U.S. says, Hispanics arenât universally onboard with Leftist Mainstream Mediaâs and Corporate Americaâs cheap-labor agenda, either. Cesar Chavez still commands major respect among Hispanics for his career of advocating for immigration restriction.

Many Hispanics have lived in North America for centuries. They might not relate much to Americans of northern European extraction, but they sure wonât be keen about African marauders feasting on their property. Nor will they sit idly by as Mexican cartels encroach on their territory.

The main danger with the Hispanic surge to the right on immigration, and toward the GOP, is that Republican leaders will take away the wrong message. Instead of recognizing some Hispanicsâ nuanced views on immigration and their aversion to blacks, your average GOP Strategerist will babble that Hispanics are ânatural conservatives,â a frequent Conservatism, Inc. Talking Point, and continue pushing for more legal immigration, because âthose are the kinds of law-abiding immigrants we want!â

Actually, we donât want or need any kind of immigrant. But in any event, the Dissident Right canât let the GOP take control of the Hispanic narrative. It is vital to understand that black dysfunction, black-on-Hispanic crime, mass black immigration and Woke attempts to erase Hispanic culture with terms such as âLatinxâ have stronger political pull for Hispanics than any of Con, Inc.âs bromides.

Public order is clearly breaking down in America; its political problems are ones of identity and not so much of public policy. The debates between Con, Inc. and libertarians can only be conducted in an homogenous society. We do not live in a homogenous society. These debates are suicidal while the Historic American Nation is being replaced before our eyes.

I hold no illusions about Hispanics being the saviors of the Historic American Nation. However, a significant minority of Hispanics who are not down with the Black Run America and mass migration, key planks for our emerging communist Democratic Party, offer at least a tactical ally.

Politics ainât beanbag, as Mr. Dooley said. It requires crafty and sometimes ruthless methods. If that means exploiting the warring factions within the Democratic Party to ward off the anti-white Left and stop mass African migration, then so be it.

Future generations are counting on us. We must not let them down, and so must do what we have to do.

Pedro de Alvarado is a Hispanic dissident who is well aware of the realities of race from his experience living throughout Latin America and in the States.

As a native of lands conquered by brave Spaniards but later subverted by centuries of multiracial trickery and despotic governance, Pedro offers clear warnings to Americans about the perils of multiracialism.