One of the most cherished American holidays is Thanksgiving, a day that Abraham Lincoln officially declared in 1863 in praise of âour beneficent Father who dwelleth in the Heavens.â In the early 1900s, Gimbels and Macyâs saw dollar signs and commandeered the celebration, evicted the heavenly Father altogether, added a parade with Santa Claus, and the rest, as they say, is history.

Every American school child learns of the harvest feast where the friendly local Indians broke bread and shared turkey with the black-hatted, big-buckled European Pilgrims in a festival of interracial harmony and mutual respect. Yet, there is almost nothing true about that idyllic scenarioânot even the turkey. This comforting mythology has concealed some of the bloodiest acts of race hate in American history. Let us pull the stuffing out of this Thanksgiving myth and get down to the bones of the Thanksgiving idea, which has some harsh and disturbing truths.

First, let us look at these so-called Pilgrims. Most people donât know that there were 102 British passengers on the 1620 voyage of the Mayflower, but those we now call Pilgrims numbered only 35âthe rest were an assortment of dregs, cutthroats, and criminals. Their journey to Indian lands was financed by wealthy Englishmen, who sought profits from the exploitation of the lumber and furs found there in abundance. The quest for âreligious libertyâ was hardly the concern of these investors and one would be hard-pressed to find God anywhere near the venture. The âPilgrim Fathersââwho, interestingly, called themselves Separatists, not Pilgrimsâcame to this new world with many more muskets than bibles; indeed, they came ready to conquer, not to pray. By the time the Mayflower arrived, the Indians, who had barely survived an earlier invasion of Europeans, shunned contact with these newcomers and retreated inland.

They were smart. As soon as the Europeans set foot upon the shore (there actually never was a âPlymouth Rockâ), and before the Whites even saw their first Indian, they set about to pillage their surroundings:

To the Indians this was frighteningly familiar. Still, they tried to make peace with these strange and violent people from across the sea. The Indian Squanto had been kidnapped in an earlier British invasion and forcibly taken to Europe. Somehow he made his way back to America, and, having learned English, he was sent out to âgreetâ the newcomers.

Despite the assistance of the Indian farmers the Pilgrim crop had failed miserably in 1621, but the Indians produced twenty acres of corn without which the colonists would have surely perished. They held a feast and invited the Indian leader Massasoit, and it was Massasoitânot the Pilgrimsâwho then invited ninety or more of his fellow Indians. No turkey, cranberry sauce, or pumpkin pie was served; no prayers were offered and the Indians were not invited back. The Pilgrims did however consume a good deal of beer. In fact, each Pilgrim drank at least a half gallon of ale a day, which they preferred even to water. It may be about the only Thanksgiving tradition that has survived intact to this day.

But there is more troubling reality behind this interracial gathering. The Europeans erected an 11-foot-high wall around their entire settlement for the purpose of keeping the Indians out. Just days before the âfeast,â a gang of Pilgrims actively sought to murder a local Indian leader. They eventually killed and beheaded an Indian, brought the head to their Plymouth compound, where they impaled it on a wooden spike, and displayed it for many years.

By 1636, these Pilgrims had been joined by many more even âholierâ European colonists known as Puritans, and their thirst for Indian blood could only be described as insatiable. They trapped some 700 Pequot Indian men, women, and children near the mouth of the Mystic River and attacked them with unrelenting military force. Only a handful escaped and few prisoners were taken. They wrote proudly of the massacre: âTo see [the Indians] frying in the fire, and the streams of their blood quenching the same, and the stench was horrible; but the victory seemed a sweet sacrifice, and they gave praise thereof to God.â This event marked what was most likely the first actual Thanksgiving. 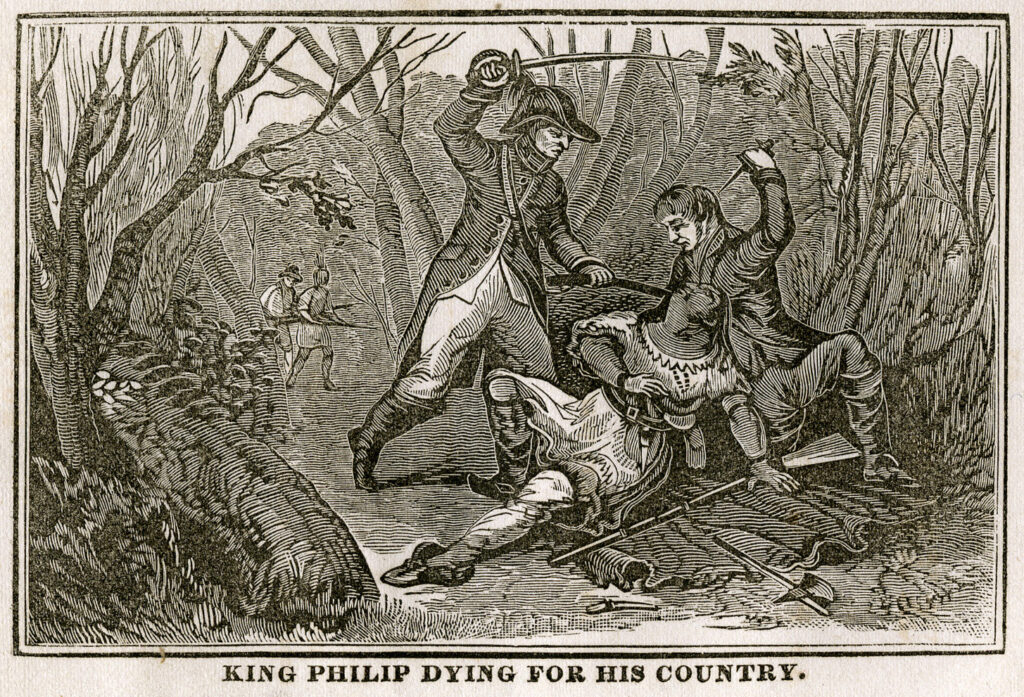 Soon, the European intruders were in a full-scale war with the Indians. A people who had for thousands of years been peaceable farmers were now forced into humiliating submission. They struck out in 1675 with raids on several isolated frontier towns, but the unrelenting aggression of the White man was too much to overcome. It took only a half a century for the Europeans to annihilate the Red nationâit must have been a record even for them. Historian Douglas Edward Leach describes the bitter end: âThe ruthless executions, the cruel sentences â¦ were all aimed at the same goalâunchallengeable white supremacy in southern New England.â

When Captain Benjamin Church tracked down and murdered the Indian leader Metacomet, his body was cut into four parts and âleft for the wolves.â His hands were cut off and sent to Boston and his head went to Plymouth, where it was set upon a pole on Thanksgiving Day, 1676! Metacometâs nine-year-old son was destined for execution, the Puritan reasoning being that the offspring of the devil must pay for the sins of their father. He was instead shipped to the Caribbean to serve his life in slavery.

In the midst of the Holocaust against the Red Man, Massachusetts Governor Joseph Dudley declared in 1704 a âGeneral Thanksgivingâânot to celebrate the brotherhood of man, but for â[Godâs] infinite Goodness to extend His Favors â¦ In defeating and disappointing â¦ the Expeditions of the Enemy [Indians] against us, And the good Success given us against them, by delivering so many of them into our hands â¦â

Just two years later one could reap about a \$100 reward in Massachusetts for the scalp of an Indian. According to one scholar, âHunting redskins became â¦ a popular sport in New England, especially since prisoners were worth good money â¦â

If this is the first time you have heard any of this history, donât get mad at The Nation of Islam. Ask your teachers why they didnât tell you. Ask them whatâs behind their other cherished holidays and traditions.

(Much of this information with references can be found in the book The Hidden History of Massachusetts: A Guide for Black Folks.) Study History, Young Man!
On Your Own Time
Guillaume Durocher
• 289 Comments • Reply
← Nazi Doctors vs. American Doctors
Hide One CommentLeave a Comment
"Where's the "Thanks" in Thanksgiving?"
• One Comment
Commenters to Ignore
Commenters to ignore (one per line)