The suggestion that any American administration had the power to influence decisively the course of a tremendous domestic-political upheaval in another great country on another side of the globe is intrinsically silly and childish. No great country has that sort of influence on the internal developments of any other one. George F. Kennan[1]New York Times, Oct. 28, 1992..

In 1941, the Council on Foreign Relations produced a key document for the US State Department, Methods of Economic Collaboration: The Role of the Grand Area in American Economic Policy. The report proposed that the Western hemisphere, large parts of Europe, the British Empire, the Dutch East Indies, and the Pacific Rim including China and Japanâwould be a âsource of raw materials and a market for our manufacturers.â To this proposal the State Department added, âTo seek less than preponderant power would be to opt for defeat. Preponderant power must be the object of U.S. policy.â

Four years later, in 1945, Mao[2]Mission to Yenan: American Liaison with the Chinese Communists, 1944-1947 by Carolle J. Carter wrote President Roosevelt a plea he would repeat to Truman and Eisenhower, âChina must industrialize. This can only be done by free enterprise. Chinese and American interests fit together, economically and politically. America need not fear that we will not be co-operative. We cannot risk any conflict.â They ignored him, perhaps because they knew what he had told colleagues[3]Portrait of a Revolutionary. Robert Payne. Abelard-Schuman. 1950.,

Some people refuse to understand why the Chinese Communists do not fear capitalism but, on the contrary, develop it as much as possible. Our answer is simple: we have to replace foreign imperialist and native feudalist oppression with capitalist development because that is the inevitable course of our economy and because both the capitalist class and the proletariat benefit. What is superfluous is not native capitalism but foreign imperialism and native feudalism. On the contrary, our capitalism is indeed too little..To develop industry, enormous capital is required. Where will it come from? It can only come from two sources: the capital accumulated by the Chinese people themselves and from foreign loans, and we must welcome all foreign investments as long as they obey the laws of China and are advantageous to our economy.

In 1979 his successor, Deng Xiaoping[4]Deng Xiaoping. The Tiananmen Papers, p. 423. added, âThose countries want to apply sanctions against us? All right, but first, letâs ask them why this is any of their business. And second, if it is, then we can fight with sanctions, too. Our economic growth might suffer, but not all that much. Weâve done all right under international sanctions for most of the forty years of the Peopleâs Republic. So we donât have to worry too much; we can take it all calmly. This little tempest is not going to blow us over. Weâre not trying to offend anybody; weâre just plugging away at our own work. Anybody who tries to interfere in our affairs or threaten us is going to come up empty.â

In 1997 the Council on Foreign Relations published its findings on trade in a 400-page book, China Joins the World[5]China Joins the World: Progress and Prospects. Michel Oksenberg and Elizabeth Economy, Eds., The Council on Foreign Relations Press. October 19, 1998, summarizing the national debate on trading with China between economic nationalists; accommodational ideationalists; confrontational ideationists; confrontational realists; and neoliberals:

THE POWER OF IDEAS

Economic Nationalists concur that economic strength has become central in world affairs and that trade issues are paramount in a nation’s agenda. They therefore emphasize that the United States should stipulate the terms of Chinese entry into the WTO in a way that clearly protects American national interests, that the United States employ trade sanctions until China meets American expectations in such areas as protection of intellectual property rights and/or working conditions of Chinese labor meets American expectations and that protectionist measures should be undertaken until China addresses its trade imbalances with the United States. Accommodational Ideationists believe that the key target should be China’s leaders and strategic thinkersâthe eliteâand the message should focus on the nature of the postâcold-war world. They advocate lengthy and candid discussions between the two sides concerning each side’s fundamental values, interests and strategies. They hope that out of such discussions, requiring many hours of patient explanations, would emerge a deeper understanding of how the two nations can best cooperate in area where their values and interests overlap to the areas of divergence.

Confrontational Ideationists tend to scorn the top elite and rather advocate targeting the broader Chinese public in service of democratic values. The supporters of this approach phrase their purpose in diverse ways. Some, assuming that significant pro-democracy and pro-human rights constituencies already exist in China wish to provide those Chinese with the information they need to sustain their beliefs and activities. Others, less sure that many Chinese adhere to the values championed by the United States, wish to cultivate such sentiments. The Confrontational Ideationists support Radio Free Asia, people-to-people diplomacy and exiles dissident communities as well as dissidents within China. They recommend confronting Chinaâs leaders with the inadequacy of their ideology and challenging them to embark on democratization. Adherents of this view draw their inspiration in part from the role they believe such activities ultimately played in the transformation of Eastern Europe. They argue that the United States must begin now to prepare for the upcoming hostile and tense relationship with China. They draw parallels between China’s rise and that of the Soviet Union, and advocate girding for a new cold war by maintaining a robust American military presence and strong alliances in Asia.

Neoliberals are confident that an open international trading system, with minimal constraints on trade, will promote American and international economic growth, and that openness and growth in turn will promote liberalizing tendencies and democratic values around the world. Moreover, the telecommunications and transportation transformations make an open trading system and international financial system more feasible than in the past; foreign trade is physically easier to carry out than in the past. China’s increasing involvement in international trade is to be encouraged and accommodated, since the nation’s leaders then will have greater incentive to support the existing international trade regime. Chinese membership in the World Trade Organization (WTO) is therefore a priority objective, as is opening the country to foreign direct investment, assisting it to develop its capital markets, and securing foreign access to the service sector of its economy. The United States must retain an insurance policy in case the effort fails, especially through maintenance of robust bilateral alliances with its partners in the region and a credible, forward-deployed military presence in the region.

By July, 2016, it was clear that things had not gone according to plan and Peter Navarro, White House director of trade and manufacturing policy, predicted that the mere threat of tariffs would force China to capitulate. âThe purpose is not to impose tariffs. The purpose is to use the threat of tariffs as a way of getting the attention of any trading partners that cheat, and, basically, encouraging them to play by the rules, knowing that Trump, if they donât, damn well will follow through on that promise.â A tariff program, he said, is âKind of like the militaryâif itâs strong enough, then nobody messes with you.â

By October, 2019 tariffs, which had been in place for fifteen months, suppressed investment and weighed on the American economy. The New York Fed found that, despite the tariffs, Chinese wholesale prices had not changed and US companies and consumers were paying the entire \$40 billion tariff costs. Researchers estimated that that tariffs have been passed on entirely to U.S. importers and consumers[6]NBER Working Paper No. 26610. Issued in January 2020. and, by yearâs end, the would cost the average U.S. household four thousand dollars and the Department of Agriculture had spent twenty-eight billion dollars in aid to farmers for lost exportsâmore than twice as much as taxpayers spent to bail out the auto industry in 2008. In 2020, Chinaâs economy is one-third bigger than ours and grows three times faster. Our execrable media have deceived us about China as they did about President Trump, as this review of the past twelve months suggests: As Herbert Schiller[8]The Packaged Consciousness. The Myth of Individualism and Personal Choice says, âMedia manipulationâs greatest triumph, most evident in the United States, is to have taken advantage of the special historical circumstances of Western development to perpetrate as truth a definition of freedom cast in individualistic terms, enabling the concept to serve a double function: It protects the ownership of [social] private property [factories, land, etc.], more or less absolutely, while simultaneously offering itself as the guardian of the individualâs well-being, suggesting, if not insisting, that the latter is unattainable without the former. Upon this central premise an entire scaffolding of manipulation has been erected.

Itâs bullshit, as we are in the process of discovering. Everything weâve been told about Chinaâeverythingâis wrong.

[2] Mission to Yenan: American Liaison with the Chinese Communists, 1944-1947 by Carolle J. Carter

[8] The Packaged Consciousness. The Myth of Individualism and Personal Choice 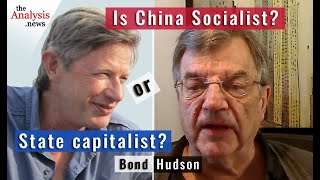 Is Chinese Socialism Working?
Michael Hudson
• 105 Comments • Reply
← Seeking Truth from PISA FactsCoronavirus: the Dark Side →
Hide 8 CommentsLeave a Comment
"What Were We Thinking?"
• 8 Comments
Commenters to Ignore
Commenters to ignore (one per line)

← Seeking Truth from PISA FactsCoronavirus: the Dark Side →
Current Commenter
says:
Current Date at Time Now
Leave a Reply - Comments on articles more than two weeks old will be judged much more strictly on quality and tone
Cancel Reply
Commenting Disabled While in Translation Mode