For us non-Americans (I live in Finland), the relative frequency of the school shooting phenomenon in the U.S (notwithstanding mass shootings in Hungerford, Dunblane and Tasmania) is something that we associate with America, like very loud customers or morbid obesity. As early as 2018, South Park made comedic hay with the predictability of American school shooting sprees

The most recent American shooting was at an elementary school. The cowardly police did nothing to stop it, refusing to intervene themselves and even preventing parents from trying to save their own kids [Onlookers urged police to charge into Texas school, By Jake Bleiberg et al., AP News, May 27, 2022].

Notwithstanding this policing failure, this atrocity has led of course led to calls for stricter gun control, with President Biden questioning why anybody should need the kind of military-level gun which the shooter employed. As he visited the school to pay his respects, the crowd impotently chanted âDo Something!â [Crowd calls on Biden to âdo somethingâ during visit to Uvalde, Texas, in wake of school shooting, By Associated Press, CBC News, May 29, 2022].

But what should Biden do? Fortunately, there is detailed research on this very subject. In fact, it is surprising that this research has not been mentioned in the Main Stream Media.

Only last year, Prof. Ira Glick, Emeritus Professor of Psychiatry at Stanford University and his colleagues, published âDomestic Mass Shooters: The Association With Unmedicated and Untreated Psychiatric Illnessâ in the Journal of Clinical Pharmacology, Jul-Aug, 2021 .

Their findings provide us with significant hints as to the âsomethingâ that should be done by President Biden.

The study aimed to diagnose what had been psychologically wrong with Americaâs many âMass Shooters.â As many of these had killed themselves, the researchers had to devise a retrospective study which would allow them to understand the workings of these menâs minds. They limited their study to mass shooting which had occurred in the US between 1982 and 2012 where 4 or more people had been killed and between 2013 and 2019 where 3 or more people had been killed. They employed the Mother Jones database, a database of 115 people identified as having committed a mass shooting, based on these criteria, in the U.S. between January 1982 and September 2019. (The database can be seen hereâSteve Sailer described it as a âcarefully curated list of the most stereotypical mass shootingsâ meaning that it omits random black gunfire with low body counts. )

Here they hit their first problem.

Accordingly, the researchers focused on the 35 mass shooters who survived and who were duly prosecuted, because with these people there was an abundance of reliable information, such as psychiatric reports.

With all of this information, they made formal diagnoses.

After this, 20 further cases where the assailant died at the scene were randomly selected to see whether there were differences in psychiatric diagnoses and treatment between such assailants and those who survived.

So what did they find?

So, it is only a slight exaggeration to say that the mass shooting problem is a schizophrenia problem.

Schizophrenia affects less than 1 percent of the US population, so, manifestly, the over-representation is enormous. It is characterised by psychosis (a loss of touch with reality and disturbed and disordered thoughts), persecutory and paranoid delusions, hallucinations, and specific negative symptoms such as âimpaired emotional expression, decreased speech output, reduced desire to have social contact or to engage in daily activities, and decreased experience of pleasureâ [What is Schizophrenia? American Psychiatric Association, 2022].

Of the remaining one third of cases, to give some examples, three had bipolar disorder. This can involve periods of intense negative feelings, which may be projected outwards. Two had delusional disorders, and one had Borderline Personality Disorder. (This is when, due to fear of abandonment, you lack a clear sense of self and you create unstable identity in order to cope).

When this sense of identityâNarcissism and the idea that you are perfect is an exampleâis challenged, then it induces intense fear and rage in you and you may try to find a way to reassert a sense of power and importance. (I have discussed this in more detail in my forthcoming book Spiteful Mutants: Evolution, Sexuality, Religion and Politics in the 21st Century).

Of the 20 spree killers who died at the scene, eight could be clearly diagnosed with schizophrenia, though, obviously, they had less information with which to make diagnoses. As the authors note, none the killers were taking any medication when they committed their acts.

So, in terms of the call to âDo Somethingâ it would seem to follow that this should be assessing children, throughout their childhoods, for signs of schizophrenia.

We all sit on the schizotypy spectrum. A schizoid personality is marked a lack of interest in social relationships, a tendency toward a solitary lifestyle, secretiveness, emotional coldness, detachment, apathy, anhedonia and stilted speech. Schizotypal personality adds to this thought disorder, paranoia, social anxiety, and unconventional beliefs. 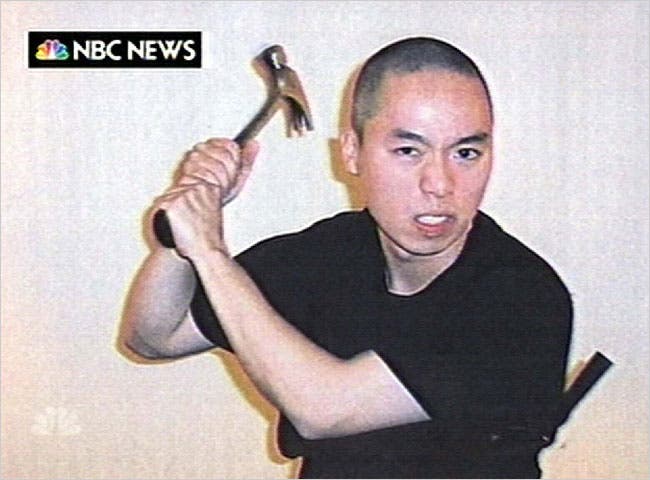 Schizophrenia is elevated among immigrants, something which has been put down to elevated feelings of stress and exclusion [Stigma for common mental disorders in racial minorities and majorities a systematic review and meta-analysis, by O. Eylem et al., BMC Public Health, 2020]. VDARE.comâs Brenda Walker anticipated this i n her pathbreaking coverage of what appears to be a unique VDARE.com interest, Immigrant Mass Murder Syndrome.

In light of this, I have a proposal for President Biden which permits Americans to own guns and schools to be schools rather than fortresses: Detailed mental health checks for potential gun owners and, further, that nobody under the age of 25 should be allowed to own gun.

If people are seriously mentally unstable, this will almost certainly have manifested by the age of 25.

In that you cannot purchase alcohol in America until you are 21, I cannot see how 25 is an unreasonable age for owning deadly weapons. The Geography of the Noosphere
Anatoly Karlin
• 345 Comments
← Parviniâs the POPULIST DELUSION: the ..."Six Impossible Things Before Breakfast... →
Hide 24 CommentsLeave a Comment
"We Know These Mass Shooters Are Schizophrenic (And Immigrants Are Disproportionately Schizophrenic). Is Suppressing Schizophrenia the Answer?"
• 24 Comments
Commenters to Ignore
Commenters to ignore (one per line)