Dr. Jordan Peterson has been nothing short than a media phenomenon of late, with his arguments for individualism, the reality of IQ, and his critique of the existential spiritual crisis facing Western Man. Yet Dr. Peterson found himself stumped by a very easy argument, coming from, of all things, an Australian comedian.

How had Jordan Peterson never heard this extremely basic counter argument to his position before pic.twitter.com/gTdLm166Hj

Here’s what happened. Peterson was asked about the issue underlying a recent Supreme Court case: Should bakers be forced to bake wedding cakes for gay weddings if they have religious objections? Peterson says, “I don’t think that would be a very good idea.” Jeffries then asked if a baker should be able to deny a wedding cake for black people. Peterson says they should probably be allowed to deny service to black customers, “but that doesn’t mean it’s right.” Jeffries then says that the civil rights movement did result in passing laws that required people to serve black people and that made society better and asks Peterson why this is different than now. Peterson says, “Maybe it’s not different. … Maybe I was wrong about that.” 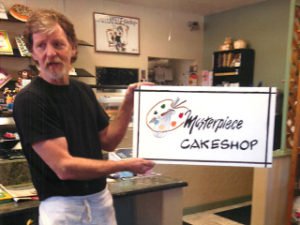 To his credit, Hemingway states “business owners should be able to turn down any customer for any reason, period.” However, he also cites the recent Masterpiece Cakeshop, Ltd. v. Colorado Civil Rights Commission decision to argue that there is a difference between protecting the free expression of creative professionals (such as bakers) and those who provide services that are “essentially uniform and interchangeable.” He therefore makes a distinction between the the government ordering someone to “bake the cake” and allowing racial discrimination, though he admits there are difficult problems in determining where precisely the line should be drawn.

Still, attempting to maintain this distinction reminds one of Lawrence Auster’s “unprincipled exceptions.” While Hemingway is willing to make a principled defense of freedom of association, Peterson is not. One suspects this is less grounded in any kind of philsophic or political doctrine and is more grounded in the necessity for him to maintain a certain level of respectability. To paraphrase Ann Coulter taunt against libertarians, it is very easy to defend “freedom” in the abstract, but once you start talking about what your position on employment discrimination is, it becomes quite difficult.

For now, it is still possible to deny the legitmacy of, say, people deciding they are biologically a different gender, what we are now instructed to call the “trans” community. It is still possible (barely) to defend the right of Christians to disagree with gay marriage. However, it is not politically possible to disagree with the assertion that the Civil Rights Act of 1964 made life better for all Americans, even though many Americans literally work their entire lives just so they can make enough money to escape from racial diversity. Ironically, to disagree with that publicly will make it very difficult for you to obtain essential services and may get you de-platformed from the Internet.

Ben Shapiro recently tried to explain Dr. Peterson’s popularity by saying, “Human beings are drawn to those who are willing to risk everything to say ‘n.'” [Intellectual Refusniks and Renegades, National Review, April 25, 2018]. Yet as with Shapiro himself, this is only true within certain limits. The conservative movement creates careers who are willing to disagree with liberalism’s most extreme manifestations, but not with the premises of liberalism itself, especially in regards to the supposed unreality of race. When a heretic advances to that intellectual line, Shapiro thinks “we should target them, we should find them and we should hurt their careers, because racism is unacceptable.”

Similarly, Jordan Peterson is willing to cave on freedom of association and his supposed message of inidividualism and liberty because to do otherwise would risk losing his brand. This isn’t to say that he is without courage or doesn’t face real opposition. But the “Intellectual Dark Web” that he is a part of will only keep getting mentions in the New York Times if, when all is said and done, he continues to play by the rules set by the leftists he supposedly fights. No, Virginia (Dare) the SPLC Was NEVER A âCivil Rights StalwartââIt Was ALWAYS A âDangerous Jokeâ
James Fulford
• 32 Comments • Reply