âThe most merciful thing in the world,â said H.P. Lovecraft, âis the inability of the human mind to correlate all its contents.â But whatâs the most risible thing in the world? Thatâs the inability of the Guardian to correlate all its contents. Here, for example, the Guardian exposes the racist stereotyping of âblack, Asian and minority ethnic menâ in Britain:

Prejudice against black men in the department [Department for International Development] came to the fore last year after Dfid published two images that appeared to portray black, Asian and minority ethnic men as sexual predators. â¦ âWhilst black male voices have largely been silent on the issue of race, that changed in August 2019 when an image was posted on the front page of Insight [Dfidâs intranet] to publicise Dfidâs new sexual harassment guidance, showing a black male aggressorâs hand over [the hand of] a white woman,â it claimed. A few weeks later, another image warning of sexual harassment appeared again on the front page of the departmentâs magazine, this time showing a white woman being followed by a BAME [Black And Minority Ethnic] man, prompting further anguish. (Racism endemic at DfID, staff claim, The Guardian, 26th August 2020)

But if the Guardian could correlate its own contents, it would discover that âblack, Asian and minority ethnic menâ are indeed sexual predators at much higher rates that White men â and often in much worse ways. A few days later, for example, the Guardian ran the headline: âMan jailed for murder of two women found in freezer in London flat.â You wonât be surprised to learn that the manâs name was Zahid Younis or that he was a âconvicted sex offenderâ with a long history of exploiting and abusing women. His two known victims â there could easily be many more â had suffered âvery significant violenceâ and seem to have been stamped or kicked to death before lying undiscovered in Younisâs freezer for years.

Back in 2018, the Guardian had news of another femicidal freezer feature, when another âmanâ was jailed for âkidnapping, raping and slitting the throat of his niece before putting her body in a deep freezer.â This man was called Mujahid Arshid. So thatâs two Muslim men, three horrendously brutal and misogynistic murders. But the Guardian has also recently informed its readers that a non-Muslim nation is no slouch at murderous misogyny either:

Over the past month, the Lakhimpur Kheri district of the Indian state of Uttar Pradesh has witnessed four incidents of girls being raped and brutally murdered. At least two of the girls were Dalits, the lowest caste in the Hindu system of social hierarchy, who were previously referred to as âuntouchablesâ and cast out from society. Last week, a 14-year-old girl Dalit girl was found hanging from a tree in a village, having been raped and murdered. Just a few days before, a three-year-old girl was raped and strangled to death. On 14 and 24 August, two girls, a 13-year-old and a 17-year-old, were both raped and killed in Lakhimpur Kheri. â¦ India remains the most unsafe country for women in the world, with a woman raped every 20 minutes. Lower caste women in particular bear the brunt, with little to no access to justice. It first came to light in a 1999 report by Human Rights Watch that documented how Dalit women in Bihar were raped and then had their breasts cut off and were shot in the vulva. (Dalits bear brunt of Indiaâs âendemicâ sexual violence crisis, The Guardian, 16th September 2020)

The Guardian claims to have a deep concern for womenâs welfare, but refuses to tell the truth about which kind of men pose the biggest threat to women. Itâs âblack, Asian and minority ethnic men.â The Guardian also refuses to admit that mass immigration from the Third World is therefore very bad for Western women. After all, the Guardian and other leftists react to truth in the same way as vampires react to crucifixes: with horror and loathing. And that comparison is entirely apt, because leftists hate Christianity quite as much as they hate White men and Western civilization. This is perfectly logical for leftists, because the three things go together. The Anglo-French writer Hilaire Belloc summed it up in a pithy formula: âThe Faith is Europe and Europe is the Faith.â

And so leftists are very eager to promote everything that attacks White men, Christianity and Western civilization. For a paradigmatic example, take the BBCâs remake of its own acclaimed television series Civilisation (1969), which was presented by the White male Christian Kenneth Clark as a celebration of European art. In 2018, the BBC attacked its own legacy in a new series called Civilisations, with three presenters, David Olusoga, Mary Beard and Simon Schama, who seem to have been deliberately chosen as the antithesis of the White male Christian Kenneth Clark. David Olusoga is Black, Mary Beard is female and Simon Schama is Jewish. In other words, the three presenters are anti-White, anti-male and anti-Christian. And while Clark was a genuinely brilliant and subtle critic and historian, Olusoga, Beard and Schama are united in their mediocrity and slavish adherence to leftist orthodoxy: âWhite bad, non-White good; male bad, female good; Christian bad, non-Christian good.â 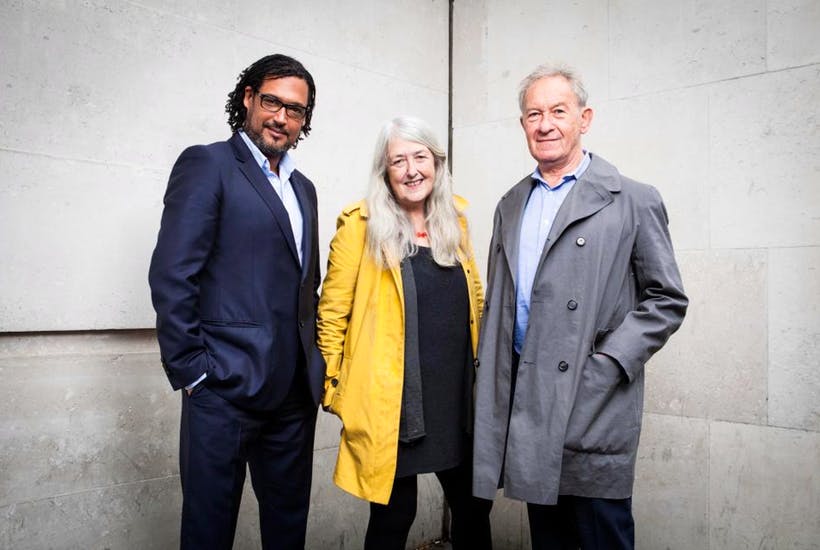 For reasons that will be obvious to anyone who reads the newspaper, the Guardian has no problem with mediocrity. And it was very pleased with the BBCâs attack on its own legacy, noting with approval that while the âfirst part of Civilisation went to France, Italy and Middlesex,â the new and improved Civilisations âvisits Switzerland, Spain, South Africa, Greece, China, Mexico, and Honduras.â Not to mention âNew Mexico, Egypt, Greece, and China.â The plurality of the new title â Civilisations â is of course an implicit rebuke of Clarkâs belief in the supremacy of Western civilization. The new title promotes instead the leftist dogma of equality between different cultures, which are all civilised in their own special way. But that dogma isnât honest, because the leftist intent all along is undermine and destroy Western civilization. As George Orwell might have put it: âAll cultures are equal, but some are more equal than others.â

And while David Olusoga and Mary Beard were very useful as collaborators in the project of negating Clark and attacking his legacy, there was no doubt who was in charge. As the Jewish Chronicle put it: âSimon Schama takes the lead on BBCâs new art history show Civilisations.â The Guardian reported that âSchama begins and ends the series â and presents five of the total nine shows.â Andrew Joyce has documented at the Occidental Observer that Schama is an energetic agent of Jewish supremacism and anti-White activism. Indeed, you could almost say that Kenneth Clark foresaw Schamaâs attack, because Clark said this in the last episode of the original series: âIt is lack of confidence, more than anything else, that kills a civilisation. We can destroy ourselves by cynicism and disillusion, just as effectively as by bombs.â

A core tradition of Judaism and leftism

The Jewish culture of critique is designed to promote exactly that despair, cynicism and disillusion in White Europeans. And Schamaâs ethnocentrism was obvious in the series, as the Jewish Chronicle was pleased to report: âFor the final episode in Civilisations, [Schama] looks at some of the pictures painted by children incarcerated by the Nazis in Theresienstadt concentration camp which are on display in the Pinkas Synagogue, Prague.â I didnât see (or want to see) the new series, but I would guess that the pictures upheld a core tradition of Jewish art down the ages: active and unrepentant ugliness. Ugliness is, of course, also a core tradition of leftism. As Steve Sailer has pointed out: âwhite Antifa rioters seem disproportionately to be â¦ physically unattractive.â

These men were arrested at the violent Portland #antifa protest & released:

Matthew Carr, 40, of Beaverton, OR https://t.co/aoqteKQhbu

It should be no surprise, then, that Antifa are so enthusiastic about setting fire to Western civilization, both literally and metaphorically. Personal ugliness goes naturally with the urge to destroy beauty, order and harmony, and to overturn the aesthetic and artistic standards whereby one is judged. Hilaire Belloc once again had a pithy summation of how things stand: â[T]here is (as the greatest of the ancient Greeks discovered) a certain indissoluble Trinity of Truth, Beauty and Goodness. You cannot deny or attack one of these three without at the same time denying or attacking both the others.â

Leftists know that the same is true of White men, Christianity and Western civilization. You cannot attack one of these three without at the same time attacking both the others. And leftists are indeed energetically attacking all these three things. At the same time, theyâre attacking the âindissoluble Trinity of Truth, Beauty and Goodness.â Leftists obviously think that the two sets of three go together. And leftists are right. After all, they have to recognize truth in order to hate it, deny it and seek to destroy it.