A powerful rebuke of the Reparations Racket came from a surprising voice recently: â[Democrats are] not soft on crime, theyâre pro-crime,â Sen. Tommy Tuberville (R-AL) declared at a Donald Trump rally in Nevada. âThey want crime! They want reparations because they think the people who do the crime are owed that. Bullshit!â Cue hysterical outrage from the Regime Media / Democrats [Alabama Sen. Tuberville equates descendants of enslaved people to criminals, by Juliana Kim, NPR, October 10, 2022].

Itâs apparently âracistâ to reject reparations and to note who commits most of the crime in America. Tuberville hasnât apologizedâand he shouldnât. Reparations are now a serious issue, with a few states and cities already pursuing it. Republicans canât ignore it. They must condemn it without reservation.

Reparations for slavery was once a fringe issue relegated to the deluded minds of radical black leaders. Itâs now a mainstream Democratic cause. California established a task force to research how best to implement reparations (this in spite of Californiaâs not being a former slave state). The California initiative may result in the compensation of all blacks for alleged wrongs, free college for blacks, and radical criminal justice reform to allow blacks to commit more crime. âCalifornia is leading the nation, in a bipartisan way, on the issue of reparations and racial justice, which is a discussion that is long overdue and deserves our utmost attention,â Gov. Gavin Newsom, an enthusiastic backer of reparations, said last year [How can California provide reparations? A new report suggests several ways, by Becky Sullivan and Sarah Mizes-Tan, NPR, June 1, 2022].

Eleven cities, including Evanston, Illinois, Austin, Texas, and San Francisco and Los Angeles, California, have pledged to pay reparations to a select number of blacks. Evanston, a suburb of Chicago, set aside $10 million to pay black families over the next 10 years. Blacks who qualify for the reparations would get $25,000 for home repair, property costs, and other similar expenditures. Illinois also was not a slave state [11 US mayors pledge to pay reparations for slavery to small groups of Black residents, by Adam Beam, Associated Press, June 19, 2021]. Many universities are also pursuing their own form of reparations [College campuses see growing reparations movement, by Michela Moscufo, ABC News, July 30, 2022].

And of course Democrats in Congress want reparations. House Democrats crafted a bill last year to create a task force to investigate the issue. The bill garnered nearly 200 cosponsors (all Democrats) and advanced out of committee. But no vote has taken place because it has no chance of passing the Senate.

Republicans so far have shown no desire to support any move toward reparations [A bill to study reparations for slavery had momentum in Congress, but still no vote, by Juana Summers, NPR, November 12, 2021]. Still, advocates have not given up. They want President Biden to create a presidential commission to come up with proposals. And it just might happen if Biden thinks itâs necessary to placate his leftist base if Democrats lose the midterms [Advocates call on Biden to act on reparations study by Juneteenth, by Beatrice Peterson, ABC News, June 17, 2022].

Nevertheless, Democrats are on the wrong side of the American public. A 2021 poll shows that nearly two-thirds of Americans oppose reparations, with 90 percent of Republicans against the idea. Eighty-six percent of blacks and 64 percent of Democrats do support the idea, however [Recent Polling Data Shows Why Nearly 2/3 Of Americans Oppose Cash Reparations, by Audie Cornish et al., NPR, June 18, 2021]. A Twitter poll conducted by the Black Congressional Caucus found that their people want reparations prioritized above all other issues [Reparations rise to number one priority issue in Congressional Black Caucus poll, by Ann Brown, Moguldom Nation, July 12, 2021]. But blacks seem alone in that concern, probably because reparations take wealth away from people who actually pay taxes.

While no Republicans publicly support the reparations idea, they rarely utter any criticism of it. Mitch McConnell mildly critiqued reparations in 2019. âI donât think that reparations for something that happened 150 years ago, for whom none of us currently living are responsible, is a good idea,â he said:

We tried to deal with our original sin of slavery by fighting a Civil War, by passing landmark civil rights legislation. We elected an African American president.

The leftist Mainstream Media lambasted McConnell for daring to push back, even though his criticism was as mild as possible.

When the House Judiciary Committee held a hearing on reparations in 2019, no white Republican dared attack the idea. The GOP instead relied on black witnesses to criticize reparations. One said reparations should be paid by the âracistâ Democratic Party rather than by the rest of America [GOP Missing in Action on Reparations, by Robert Hampton, American Renaissance, June 20, 2019].

Tuberville is the first white Republican to attack reparations in recent memory. And he seems like an unlikely champion. When he coached the Ole Miss football team, Tuberville led the effort to purge the Confederate Battle Flag from its stadium. He was also pretty weak on immigration when he ran against Jeff Sessions in the 2020 Republican Senate Primary in Alabama. But now he appears to be the lone Republican to express the baseâs revulsion toward reparations. Considering the backlash and his refusal to apologize, Tuberville appears genuine.

Of course, the deluge of attacks on the Alabama senator shows why many Republicans are too timid to take on this issue. Democrats fell over themselves to condemn Tuberville. Maryland Rep. Kweisi Mfume said the comments would lead to violence against blacks. âHis comments are the most vicious, vile, repugnant, parochial, racist thing Iâve heard in a long, long time,â Mfume told MSNBC. The Nevada State Democratic Party said Tubervilleâs statement was ânothing less than monstrous.â It also proudly defended reparations. The NAACP condemned Tuberville, demanded that corporate donors stop supporting him, and said the only crime Republicans should talk about is the January 6 Mostly Peaceful Protest. The black lobby claims the âreal criminalsâ are Republicans associated with that event. Apparently, the blacks who regularly rape, rob, and murder are not the real criminals [Democrats call Sen. Tubervilleâs comments about crime and reparations racist, by Eugene Scott, Washington Post, October 10, 2022].

But not only has Tuberville not apologizedâthe GOP hasnât condemned his comments. The only pushback came from Nebraska Rep. Don Bacon. He said Tuberville shouldâve been more âpoliteââbut didnât disavow the general point. In contrast, Florida Rep. Byron Donalds, a black man himself, defended Tuberville and pointed to Black Lives Matter activists who claim looting is a form of reparations [The difference between GOP and Dems couldnât be clearer after the Tuberville scandal, by Dean Obeidallah, MSNBC, October 14, 2022].

Even better than silence, though, would be the GOPâs publicly defending Tuberville and stating unequivocally he is absolutely right. Republicans canât hope to hide behind black conservatives. This is an emerging campaign issue and Democrats will only be more aggressive in their advocacy. 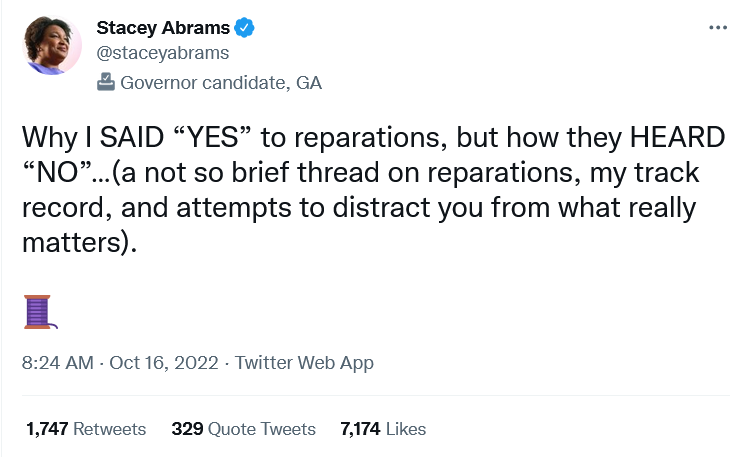 Abrams knows she has to push reparations to retain the support of blacks and the progressive base.

Itâs not only right to oppose reparations, but also smart politics. Remember, 90 percent of Republicans oppose it. The GOP can use the issue to win independents alienated by Democratic extremism. The party should also use it to motivate the GOP base to come out and vote.

All Republicans have to do is to follow Tubervilleâs example. Do they have the guts?

Washington Watcher II [Email him] is an anonymous DC insider