President Donald J. Trump is rightly blaming Democrats for the deaths of migrant children who tried to enter the country, two in the past month. [2 migrant children died this month. But warnings were documented long before that. By Pamela Ren Larson, Arizona Republic, December 28, 2018]

…children in question were very sick before they were given over to Border Patrol. The father of the young girl said it was not their fault, he hadnât given her water in days. Border Patrol needs the Wall and it will all end. They are working so hard & getting so little credit!

In contrast, Karen Tumulty at The Washington Post grandly proclaims that âTrumpâs tweets on children dying in U.S. custody are a new low.â [December 29, 2018]. But even her showy faux outrage shows President Trump is right. 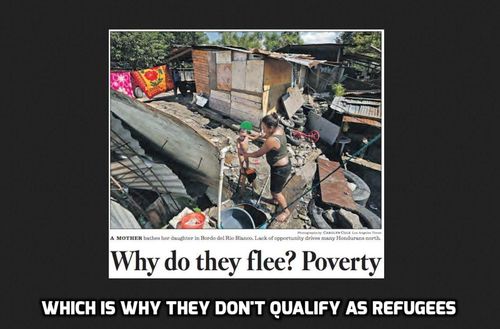 Tumulty [Tweet her] claims migration is inevitable because people are âbeing driven from their native countries by poverty and violenceâ¦Until those forces are addressed, migrants will keep coming,â she proclaims, âeven if it means taking greater risks to do so.â

But Honduras, Guatemala, El Salvador and other disasters will never reach Americaâs standard of livingâat least not unless Americaâs standard of living is destroyed because its population is swamped by Central Americans. But of course, we arenât allowed to talk about the reasons for that. And, anyway, Americans are already sending billions of dollars south, with nothing to show for it.

So really what Tumulty is saying is that migration will continue forever and there is nothing we can or should ever do about it.

Bunk. Whatâs actually happening is that incentives are in place for âmigrantsâ to endanger their children by bringing them north. For example, the family of eight year old victim Felipe Gomez Alonzo brought him because they knew a child would increase the chances of getting into the country. [Parents of 8-year-old migrant who died brought boy for easier US entry, by Amber Athey, Daily Caller, December 27, 2018] Similarly, a seven year old girl who died earlier this month was just one of dozens of unaccompanied children in a migrant caravan. [DHS: 7-year-old migrant who died was not ill upon initial screening, by Amber Athey, Daily Caller, December 14, 2018] Even CNN reporter Dan Simon admitted that current law incentivizes migrants to bring children (to whom they may not even be related) to increase their odds of breaking into our country. [CNN reporter admits U.S. law entices illegals to bring kids to improve their chances, by Brad Wilmouth, NewsBusters, December 29, 2018]

Of course, itâs self-evidently absurd that any sick immigrants are being admitted to the United States. Lost in the Ellis Island mythology: the reality that the station always excluded sick people from entering the country.

Given unlimited numbers of invaders and scarce resources, tragedy is inevitable. Yet what is truly shocking: how these deaths are treated as sacrifices for the greater good by the Main Stream Media, celebrities, and the NPCs who slavishly follow the journalist/activists programming.

For example, the sister of Felipe Gomez Alonzo said the United States should return her brotherâs body so he can be buried in Guatemala and also should âlet her father work in the United States so that âmy brotherâs death wonât be in vainââ . [Official: Guatemalan boy who died in U.S. custody tested positive for influenza B, final cause of death remains under investigation, by Maria Sacchetti, Washington Post, December 28, 2018] Even the moderate Mark Krikorian is astonished by this âchutzpah.â

How do you say "chutzpah" in Mayan?: "She said the family would ask the US government for two things: Return Felipeâs body so that they can bury him in Guatemala, and let his father work in the United States so that 'my brotherâs death wonât be in vain.' " https://t.co/yZnXKpvZtM

Apparently, these children are regarded as the equivalent of battlefield casualties, soldiers who fell in the justified invasion of the racist United States. Indeed, the âinvasionâ metaphor is becoming harder and harder to avoid, as yet another migrant caravan, this one comprising an estimated 15,000 Central Americans, is preparing to march against the southern border. [Another, bigger migrant caravan is set to leave from Honduras next month, by Wendy Fry, Los Angeles Times, December 27, 2018]

The MSMâs interest in cheering on this invasion, despite the casualties, is nothing new. The same kind of pattern emerged in Europe. After the EU and the United States destroyed the government of Libya and enabled endless migrant flotillas to Europe, thousands of migrants drowned. The victims were weaponized by journalist/ activists who argued for essentially unlimited immigration into the Continent, often as part of a larger agenda of unmaking Europeâs cultural and racial identity. Indeed, those who try to stop NGOs from transporting migrants across the Mediterranean, from activists like Lauren Southern and Generation Identity to the Italian government, are accused of wanting to let migrants drown.

Yet since the Italian government has cracked down on clandestine crossings, migrant deaths have dramatically fallen by more than half. [Boat migrants down 80 percent in populist Italy, up 350 percent in socialist Spain, by Liam Deacon, Breitbart, August 1, 2018] Conclusion: itâs the ânativistsâ who are saving lives. 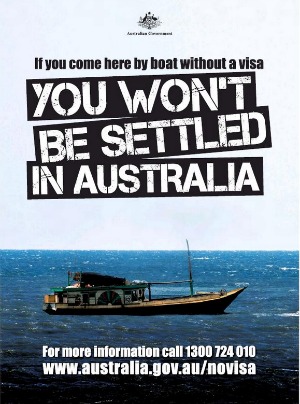 Similarly, Australia was horrified by migrant drownings in 2010. But the country responded by refusing to allow illegal aliens to apply for asylum and stopping the boats, prompting complaints by anti-white reporters about Australia being âruthlessly effective.â Yet this Australian alleged ruthlessness also saved lives, as migrant deaths plummeted because there was no longer an incentive for migrants to try to make the dangerous crossing. [Could Australiaâs âstop the boatsâ policy solve Europeâs migrant crisis? By Paul Farrell, The Guardian, April 22, 2015]

Yet these facts are apparently irrelevant to those setting policy.

One is reminded of Stalinâs supposed saying that âone death is a tragedy, a million deaths is a statistic.â For example, the 2015 drowning death of young Aylan Kurdi, a Syrian boy who died while trying to cross to Greece, inspired countless charitable donations to âpro-refugeeâ organizations, emboldened pro-migration forces, and even led to policy changes. Yet Kurdiâs family had been living in Turkey for a year and could not be considered legitimate ârefugeesâ under international law. The family endangered their sonâs life essentially for materialistic reasons because there was an incentive to do so.

Pictured above, Aylan Kurdi, a child dead due to reckless parents, and Linda, a young Swedish woman beaten and raped due to reckless refugee policies. See also this, from the Nice truck attack: Pictures: Alan Kurdi, Killed By His Father’s Recklessness Got Much More Coverage Than A Small French Child Run Over DELIBERATELY

The quest for handouts in the West by greedy migrants, even at the expense of their childrenâs lives, is transformed into a heroic crusade thanks to emotional manipulation by MSM journalist/ activists. Just as Aylan Kurdiâs death somehow became the Westâs fault, so is the death of Felipe Gomez Alonzo is going to be engineered as somehow Americaâs fault.

But the mourning is selective. The showy, overwrought displays of grief for children sacrificed for a bigger bank account are a stark contrast to the indifference and borderline contempt displayed by journalist/ activists for the victims of illegal aliens.

The latest forgotten victim: Ronil Singh, a legal immigrant police officer allegedly slain by one Gustavo Perez Arriaga, who was illegally present in the United States despite two arrests for DUI and known gang affiliation. [California authorities arrest, identify suspect and 7 others in officerâs shooting death, by Jay Croft and Amir Vera, CNN, December 29, 2018] A host of other illegals attempted to help the suspect escape the country.

Even more forgotten: 12-year old Clinton Howell, killed on December 18 by a Jamaican illegal infiltrator.[Court Documents Offer New Details on Killing of 12-Year-Old Bridgeport Boy, By Justin Schecker, December 27, 2018] Curiously, this has gotten absolutely no national publicity, although the victim (and the alleged perpetrator) were black. (American MSM coverage follows a predictable pattern: accused Tajay Chambers is an â18-year oldâ or a âConnecticut teenâ even in Fox News, but an âundocumented Jamaican immigrantâ in the Daily Mail and a âJamaican teenâ in the Jamaica Observer.)Yet the victimâs family eloquently protested the alleged killerâs illegality:

A native of Jamaica, Chambers has lived with family in Bridgeport for 16 months, according to his Public Defender. The judge confirmed immigration and Customs Enforcement has placed a detainer on him because he is not a U.S. citizen.

Hearing that was an eye-opener for the 12-year-old victim’s family, who asked for stricter immigration enforcement.

âMaking sure you know citizens are here and basically you know not extending visas or illegal immigrants because stuff like this happens and they take American citizens lives,â said Dawkins.[ICE detainer placed on 18-year-old accused of killing 12-year-old Clinton Howell, by Tony Terzi, FOX61, December 27, 2018, Emphasis added]

Compared to the deaths of illegal alien children, these relentlessly occurring tragedies are apparently seen as simply unfortunate, random occurrences. They have no larger mythic significance or policy consequences.

Yet everything that is happening is the result of policy choices. As one sheriff investigating Singhâs death pointed out, he died because of Californiaâs âsanctuary stateâ policy. [California sanctuary law under fire as policeman Ronil Singhâs suspected killer, an illegal immigrant, is captured, South China Morning Post, December 29, 2018]

Itâs obvious that encouraging an unlimited number of poor people to undertake a dangerous journey will lead to terrible outcomes. This is especially true when their ranks include criminals, slavers, and opportunistic human smugglers.

If Democrats were concerned about the lives and safety of these migrants, they would insist on strict border security and providing enough resources to law enforcement before there is even a discussion about what to do with asylum seekers or migrants of any form.

It is an attackâa war against America. To those who want to deconstruct our country, casualtiesâeven childrenâare acceptable losses.

And the invasion wonât stop until either Americans summon the will to stop itâor until America is eradicated altogether.

If it ends with the latter, then the only question is where Americans themselves can go as refugeesâespecially, as the experience of the Afrikaners proves, no one is going to be writing sob stories about us.