“Fields did nothing wrong. Even if he intended to plow into the mob. They (Antifa) broke the law, they conspired to deprive us of our rights, all on some outrageous pretense of âstopping violence.â”

The author was present in Charlottesville during the August 2017 melee. He has been reporting from the courtroom since the trial started. For more of his coverage, see here.

A key defense witness testified today, the last day of arguments in the trial of James Fields, who is accused of first degree murder for ramming his car into a crowd of protestors at the August 12, 2018 Unite the Right rally in Charlottesville, VA.

The defense called Dwayne Dixon, an âanti-racist activist,â to testify about his actions that day, and about a Facebook post, in which Dixon claimed that he had used an AR-15 rifle âto chase off James fields from our block… before he attacked the marchers.â 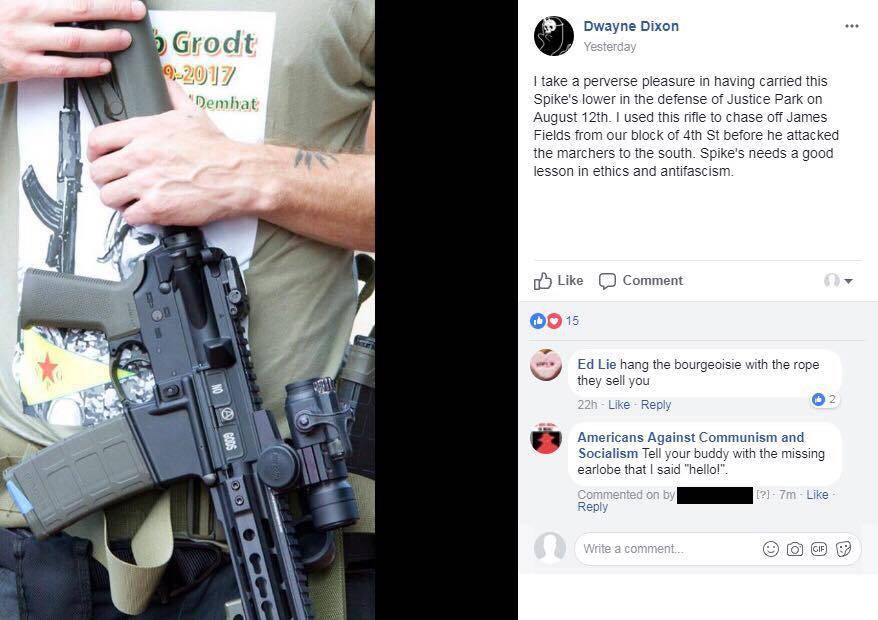 Dixon said that he came to Charlottesville with 18-19 members of the leftist militia group Redneck Revolt âto join others to protest against white supremacy and fascism.â According to Dixon, between 12:40 PM and 1:15 PM, he saw a âsilver muscle car with tinted windowsâ pass his location multiple times before it crashed into a crowd two to three blocks south of him at 1:42 PM.

He also testified that he brought two magazines, but that he kept his rifle slung across his chest. When Fieldsâ car passed, shouted âGet the fuck out of here.â He also said he saw a number of vehicles with âwhite nationalist insignia,â but that Fieldsâ Challenger did not have any such markings. 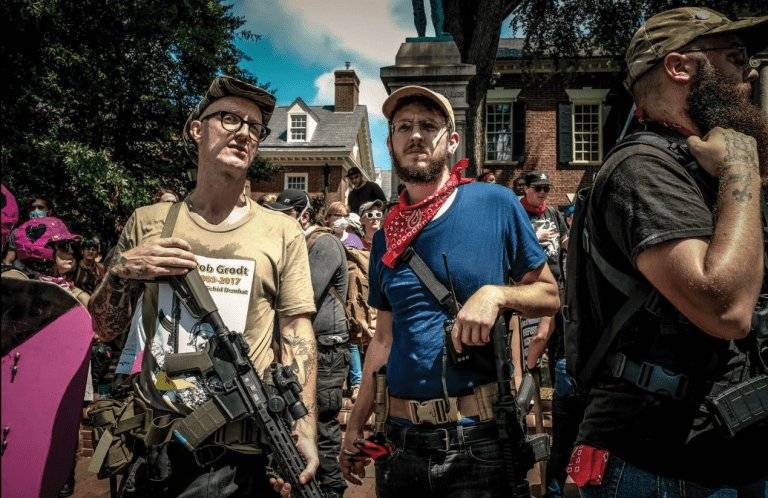 Dixon is a key piece of the defenseâs case. They must argue that Fields had no other route out of Charlottesville than to go through the Antifa mob that was moving toward him, and that Dixon was instrumental in preventing him from his only other course of action.

Another key defense, Philip Depue, testified yesterday. Depue, a digital forensic scientist said that, based on his analysis of data extracted from Fieldsâ phone, Fields had entered his Ohio hometown into Google Maps less than three minutes before the crash. The app presented Fields with two routes out of town, neither of which included heading south on 4th street, the route he would eventually take (green arrow in graphic below): 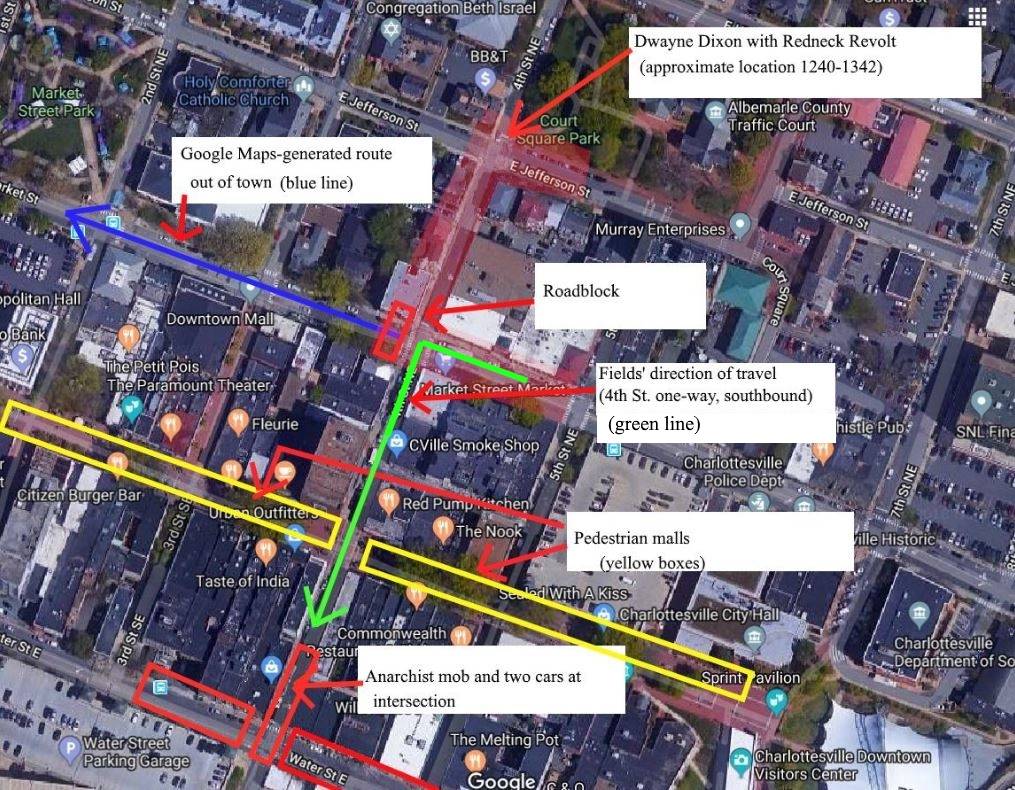 The app suggested that Fields continue west on E Market Street or turn around and head east. However, the first route would mean making an illegal u-turn and heading back into an area where Dixon had been loitering. The second route was likely obstructed by a roadblock, as can be seen from police helicopter footage from approximately 15 minutes before Fields came to the intersection: 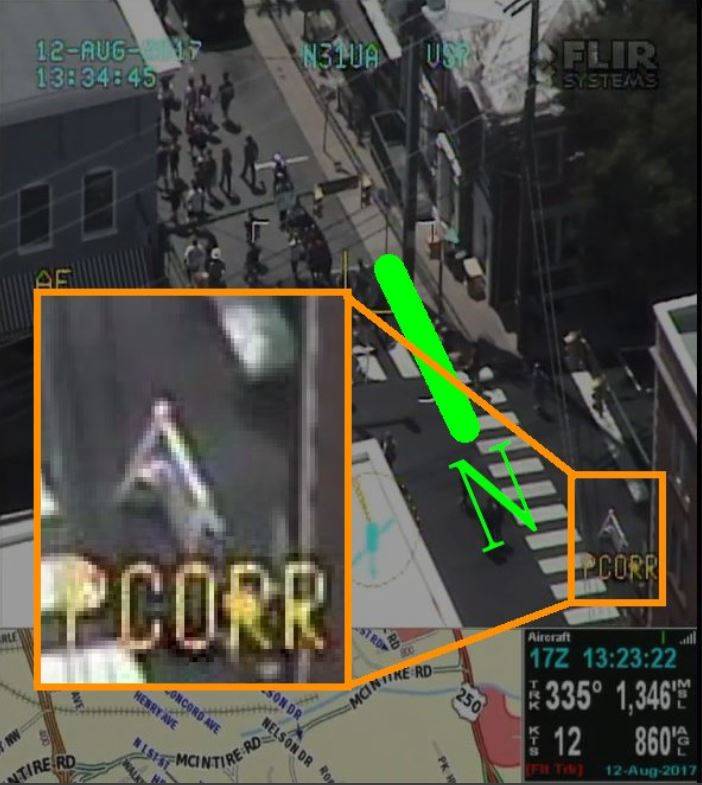 Fieldsâ only other options would have been to make an illegal right turn, going the wrong way up the one-way 4th street, or turn left onto 4th street. Fields made the left, and was faced with a crowd of hundreds marching toward him. At that point he backed up and, according to Depueâs testimony, checked Google maps again.

Trapped, he attempted to drive through the crowd at 17 miles per hour. But when he came within meters of the crowdâs main body, his car was hit hard by two people with sticks. 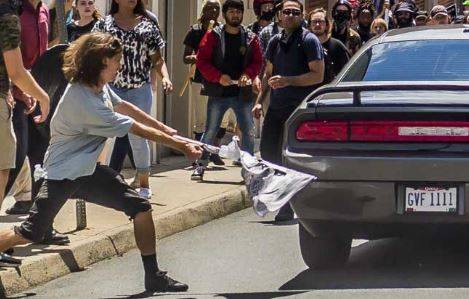 He then accelerated, and hit Heyer at 23 mph, while simultaneously hitting a stopped car in front of him. He then switched into reverse, and several of the crowd attacked the back of his car with sticks and bats. He reversed a block and a half and fled.

The defense rests today. Their argumentation has been passive throughout the trial. They have not objected as the prosecution brought witness after witness to give irrelevant testimony about their injuries and the positive character traits of Heather Heyer, the only person to die in the incident. Their cross-examinations have been unaggressive at best.

Their examination of Dixon was especially weak. Defense counsel Denise Lunsford failed to press him by comparing his testimony to what he claimed in the Facebook post.

She did not ask âWhat exactly did you mean by âI used this rifle to chase off James Fields from our block?ââ Nor did she ask if he had ever raised his rifle to the low-ready or pointed its muzzle at Fields or anyone else. She did not ask if he or his group had moved the roadblock. She did not inquire into who gave him the authority to direct traffic, or why his group had failed to disperse well over 2 hours after a state of emergency had been declared.

If the jury understands the above facts, they will have no choice but to find Fieldsâ not guilty of first degree murder. But they could still find him guilty of second degree murder or manslaughter. He is also facing eight counts of aggravated malicious wounding, among others. The lackluster defense might prevent the prosecution from getting everything they want, but Fields will likely face years in prison. Not one anarchist has been criminally charged. Such is justice in Charlottesville.

What we do know, is that an anarchist mob impeded, intimidated and attacked US citizens. We know that it enjoyed the open support of the media and the tacit support of the authorities. We know that the mob blocked the approaches to Lee Park as part of a conspiracy to deprive, on the assumption that the authorities would not have the stomach to remove them. It is a tactic that Antifa and its auxiliaries have used time and again. When the state declared UTR an unlawful assembly, these same thugs hounded and harassed groups of rally-goers as they tried to disengage in compliance with a gubernatorial proclamation. The anarchists, however, went on a celebratory rampage, where they attacked the lives and property of whomsoever they desired, unrestrained by the police. This mass illegality lasted for over two hours.

Fully grasp that, and this follows: Fields did nothing wrong. Even if he intended to plow into the mob. They broke the law, they conspired to deprive us of our rights, all on some outrageous pretense of âstopping violence.â

On August 12th, 2017, the police in Charlottesville refused to exercise their lawful authority. They failed to maintain order. They failed to insure our rights. They therefore abrogated their right to do so in the future.