Itâs not uncommon for conservatives to lament the 60s, though few have done it as boldly and convincingly as Christopher Caldwell in his latest book The Age of Entitlement: America Since the Sixties. The book is a serious national populist critique of our current power structure and holds no punches. Unlike most conservatives who praise the civil rights movement as one of the good things about the 60s, Caldwell argues itâs the rotten core of our current paradigm:

Civil rights ideology, especially when it hardened into a body of legislation, became, most unexpectedly, the model for an entire new system of constantly churning political reform. Definitions of what was required in the name of justice and humanity broadened. Racial integration turned into the all-embracing ideology of diversity.

Caldwellâs book asserts that the civil rights movement created a second, rival Constitution thatâs incompatible with the original. The battle over which Constitution should reign supreme lies at the heart of our current polarization. A reader will come away with the impression that we should repeal the Civil Rights Act of 1964, a major heresy to liberals and conservatives alike.

Caldwell is not a writer of the Dissident Right. He is a respectable conservative who served as a long-time writer for the defunct Weekly Standard. Heâs a frequent New York Times contributor and is currently a senior fellow at the Claremont Institute, an esteemed conservative institution. His book is published by one of the titans of the industry and is being noticed by the mainstream media. The back cover carries the endorsement of mainstream historian Andrew Roberts, Victor Davis Hanson, and Shop Class as Soulcraft author Matthew Crawford.

His arguments will not be easily ignored.

There are hardly any disclaimers in The Age of Entitlement about the evils of âracismâ or âsexism;â thereâs no queasiness at striking our ageâs sacred cows. The book remains on target and concedes nothing in its observations of the civil rights movementâs disastrous effects; Caldwell argues that the revolutions of the 1960s hurt white men the most and stripped them of their country. The Age of Entitlement is not exactly an identitarian work, and it is firmly rooted in conservatism. He shapes his argument to appeal to conservative, and even centrist, readers. His claims that the Second Reconstruction is âa military assault against the Constitutionâ that eradicated freedom of association equally resonates with conservatives and identitarians. He also focuses on the United Statesâ massive public debt â an oft-mocked conservative concern â and ties it to the civil rights regime and its dictates.

According to The Age of Entitlement, the civil rights revolution was enacted by an elite coalition of activists, judges, university administrators, lawyers, politicians, and, most importantly, businessmen. Some were true believers in the cause. Others just wanted to accommodate the new paradigm and not cause any trouble. This cadre was empowered to transform our society with the encouragement of Supreme Court decisions like Brown v. Board of Education and legislation such as the Civil Rights Act of 1964.

Most of the judges and lawmakers who supported these developments did not comprehend the far-reaching effects of their decisions. Lawmakers were promised the Civil Rights Act wouldnât create racial quotas; it did. Lawmakers thought the Immigration Act of 1965 wouldnât change Americaâs demographics; it did. The new laws enabled activists and bureaucrats to wage war against the old Constitution â and the old Constitution is losing.

While the book discusses the 60s revolutionâs effect on sex, work, the economy, foreign policy, and many other topics, itâs most incisive on race. As previously mentioned, Caldwell does not offer the usual paeans about the civil rights movement and how it lost its way after Martin Luther Kingâs death. Many conservatives believe there was a âgoodâ civil rights movement hijacked by radicals who wanted political correctness and affirmative action. The âgoodâ civil rights movement just wanted equality, not special privileges or a radical transformation of America. Conservatives believe that all that needs to be done is to reject the radical regime and revive the âgood civil rights regime.â Caldwell pours cold water on these delusions: âAffirmative action and political correctness were the twin pillars of the second constitution,â he writes. They were what civil rights were. They were not temporary.

The author savages Ronald Reagan, another conservative icon. Conservatives hail Reagan as the man who saved America and took a stand against big government. Caldwell incinerates this delusion. In reality, Reagan expanded the size of the government and made the civil rights regime worse. His amnesty worsened the immigration problem, adding migrants to the civil rights regimeâs clientele. Caldwell disputes that Reaganism was even conservative â it didnât restore Americaâs traditions or values, it entrenched the spirit of the 60s revolution in governance and society. The Gipper simply tapped into conservatism, instead of representing it:

The return of power to communities that Reagan promised never happened. On the contrary, the world that his supposedly conservative presidency left behind was more indulgent of the anti-conservative impulse to âcut the past away,â provided the cutting were done heedlessly by businessmen rather than purposefully by bureaucrats.

Caldwell argues that âReagan was put at the head of a victorious insurgency and handed away its victories.â

His analysis of campus insanity is astute. Many conservatives imagine that campus political correctness and identity politics are the result of âhelicopter parentsâ and snowflakes who canât handle Ben Shapiroâs epic takes. All that needs to be done is for these kids to grow up and face the real world. Caldwell argues that the real world is far more like campus totalitarianism than the world that exists in boomer fantasies. Campuses are the way they are due to the civil rights regime: Speech codes, ethnic studies, non-white empowerment programs, etc. are a result of the Civil Rights Act, not coddled snowflakes. The changes are top-down, and administrators are the ones to blame. Student radicalism is inspired by the environment that surrounds them.

Itâs silly to think these kids will grow up when they get a real job. HR departments and corporate execs share their values and concerns. As Caldwell notes, corporations are arguably more zealous in rooting out political incorrectness than campus administrators. The student extremists of today will be the boardroom directors of tomorrow, just like the student radicals of the 60s.

The civil rights movement imposed several negative effects on white America. Ethnic enclaves were carved up after the Civil Rights Actâs repeal of freedom of association. Qualified whites were rejected from competitive colleges and prestigious jobs. Corporations enforced political correctness in the workplace and society in general. Banks scrapped sensible lending policy to accommodate the push for more non-white homeownership and opportunities. (This development helped cause the Great Recession.) Affluent immigrants who just got off the plane now reap the benefits of affirmative action. Free speech is constrained by the dictates of employers and journalists. Whites are not allowed to say certain words or thoughts while non-whites can say whatever they please. Whites canât even think they built this country.

The winners of the new regime are minorities who can all unite together against the heterosexual white man. The losers are obvious.

Some right-leaning commentators were not thrilled with the bookâs conclusions:

Woke centrist Wesley Yang complained in the Washington Examiner that The Age of Entitlement is too much âa narrative of white male victimization.â Yang didnât buy Caldwellâs argument that the civil rights regime hurt whites, and critiques the author for âsettl[ing] into a long rant against political correctness.â

Yang, the author of The Souls of Yellow Folk, counters that the system somehow puts non-whites at a disadvantage, too. The critic makes big-brain arguments that identity politics and affirmative action hurt non-whites and cites Supreme Court Justice Clarence Thomas â how original! â as proof that non-whites are upset with the civil rights regime. Yang tries to argue that political correctness was never part of the civil rights movement, and its current pervasiveness is all Barack Obamaâs fault.

Yang also asserts that minorities hate political correctness, but fails to mention that the overwhelming majority of non-whites support hate speech laws. Whites are the only group where the majority opposes criminalizing hate speech. The centrist critic concludes with the cringe declaration that âa multiracial Americaâ preserves freedom, civility, and economic growth âamid the hysteria unleashed by Trumpism.â 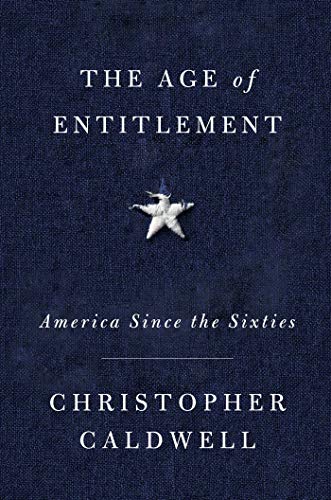 New York Times columnist Ross Douthat largely agrees with Yang in his more positive assessment of The Age of Entitlement. Douthat is uncomfortable with Caldwellâs racial focus and pines for a more inclusive populist polemic. You know Caldwellâs book is close to the mark when respectable conservatives and faux-populists squirm when reading it. Serious national populism is not supposed to comfort those who seek validation from the system.

The Age of Entitlement is one of the most important books of our time. Dissident Right readers will come away with a better grasp of how we got here and the way our power structure operates. Along with Tucker Carlsonâs Ship of Fools, itâs a terrific redpill for conservative relatives and friends.

Every conservative despises affirmative action and political correctness â they just need to realize these maladies were baked into the civil rights revolution from the start.

Fade to Black
Jack Antonio
• 187 Comments • Reply
← The 1619 Project Devours Its Liberal Pa...
Hide One CommentLeave a Comment
"The World the Civil Rights Movement Wrought:"
• One Comment
Commenters to Ignore
Commenters to ignore (one per line)