This video is available on BitChute here.

Last week I explained why different groups donât achieve at the same level. Itâs because the races are not identical. There are all sorts of interesting differences â this paper from just last year says you can tell American blacks from American whites just from the patterns of microbes living in their mouths. But the most important difference is in average IQ. As I explained last week, a white person is seven times more likely than a black person to have an IQ of 110 or higher, and 30 times more likely to have an IQ of 125 or higher. Very probably, 50 to 80 percent of the gap is due to genes, and no one has figured out how to change the environment to make up for the rest.

Expecting blacks to be just as good as whites at math is as deluded as expecting women to be just as tall as men. Yes, there are some blacks who are good at math and there are some really tall women, but the average man is taller than the average woman. There is no practical way to change that. When it comes to race, we are supposed to close our eyes and pretend that white racism â and only racism â is holding back blacks and Hispanics.

Some people say we have to keep quiet about race and IQ because black people will get angry if we talk about it. They might â well â riot. In case you havenât noticed, theyâre rioting worse than ever. Just since June, there has been so much rioting that 200 American cities had to impose curfews and 31 states had to call in the national guard. Blacks donât riot because we talk about race and IQ. They riot because we donât talk about it.

Think of it this way: American society tells blacks from the day theyâre born that they are just as smart and hard-working as white people, and that they are poorer and more likely to be in jail only because white people grind them down. The very man on his way to the White House says that ârooting out systemic racism in âthe moral obligation of our time.â Wow. White people must be pretty awful.

How could you help but hate white people if everyone â from the President on down â tells you that white people are cheating you and hurting you every day. White people are doing violence against you just by staying silent. Look: white people even admit theyâre doing it. And thereâs the 1619 Project, a huge campaign by the New York Times to make slavery and black suffering the central element in American history. American history is nothing but slavery, Jim Crow, lynching, and white supremacy.

If our rulers had deliberately set out to make black people hate us, they couldnât have come up with a better plan. And itâs working. Here are some success stories from just the last few months. Billy Porter will play the fairy godmother in a film version of Cinderella. He says: âThe reason why our country is in the mess weâre in is simply because of whiteness. White supremacy. White people choke-holding power and sucking the life out of humanity.â

Actor and singer Nick Cannon says white people are inferior because they donât have melanin. Therefore: [[1:32 â 1:40 âthe only way they can act . . . in order to survive.â]]

Thereâs a fellow with plenty of melanin named Abhi Agarwal, who works for this guy, Sen. Ed Markey of Massachusetts, and who tweeted â but later removed â the following message: âI am once again asking for the utter and complete destruction of white men.â

Nahlia Webber went to Columbia University and runs a non-profit that gets money from the Schott Foundation, the Kellogg Foundation and other fancy places. At this website, she wrote about âwhite people reveling in their state-sanctioned depravity, snuffing out black life with no consequences,â and she complained that white children are âraised from infancy to violate black bodies with no remorse or accountability.â She claims to be an expert in child education.

Here is a wanted poster put up by a black group: âWanted for crimes against this community. If seen, do not engage.â

Karen Attiah, is a 34-year-old black woman who has spent her life battling white supremacy â all the way through Columbia and a Fulbright Scholarship, and she now decides what goes on the op-ed page of the Washington Post. In June, she tweeted â and then removed â some of the things she doesnât like about white women and then â as you can see at the bottom â she added: âWhite women are lucky that we are just calling them âKarens.â And not calling for revenge.â

This guy Tamar Bishop, is doing her work for her. He beat a white woman bloody and unconscious, breaking her nose and teeth. Then he raped her. As he explained, ââShe was a white girl. She deserved it because us minorities have been through slavery.â

Jayvon Hatchett went out and found a white man and stabbed him seven times because he thinks white people are evil. When police caught him and locked him up, he beat his white cellmate to death, this guy, because he hates white people.

All this just since June. If you go back a few years, youâll find the case of four black Vanderbilt football players who gangraped a white coed. Afterwards, this one, Corey Batey, urinated on her face and said, âThatâs for 400 years of slavery, you bitch.â

They hate us because we teach them to. We tell them white people make them miserable. They would hate us a lot less if we told them the truth: that American society is fundamentally fair, and blacks can go far as their talents will take them. Instead, we teach them that we are the most horrible people on earth â and then reward them for learning their lessons.

During the George Floyd riots in Minneapolis, blacks destroyed the Target in their neighborhood. Now, âTarget is reopening its looted store with black shoppers in mind.â It rebuilt the store from the ground up, and hired a black-owned design firm to, as Target put it, âcreate environments where Black guests feel overtly welcome.â

Target was one of hundreds of companies that rewarded blacks for rioting. As US News reported just a few days after the riots began, âCorporations Pledge \$1.7 Billion to Address Racism, Injustice.â Iâm sure itâs well over two billion by now. Maybe three billion. But thatâs nothing new. Last year, Intel announced, âThe company also committed \$300 million to support this goal and accelerate diversity and inclusion.â

Universities do the same. In January this year even before the big George Floyd corporate checks, we heard that âYale is Spending \$135 Million on One Diversity Initiative. How Much is it Spending University-Wide?â That answer? âNobodyâs counting.â

Money is only part of it. Inside Higher Ed is a prestigious website. Just last Friday it published this article on education reform called âDismantling the Masterâs House.â After universities are dismantled, we will build them back with Afrofuturism! âAfrofuturism is a combination of imagination, liberation and dreams of what is possible in a future that is not dominated by Black cultural death and slavery.â Afrofuturism will save Harvard and Yale from black cultural death.

This is all part of the tragically futile campaign to ânarrow the gaps,â and get black and Hispanic students to do as well as whites. Here is a graph of the percentage of fourth graders in public schools who are proficient in math. The blue line at the top is whites, next Hispanics, and then blacks. Whites are way ahead, but because we donât dare talk about IQ, all weâre allowed to say is that racism is the problem, and we have to turn schools inside out trying to solve a problem that has no solution.

If you want to know where the country is headed, think about this: In the 12th grade, the average black or Hispanic student is reading and doing math at about the level of the average white 8th grader. And blacks and Hispanics will be an ever-increasing percentage of our workforce.

Which brings me to China, our number-one competitor. China doesnât have a lot of blacks and Hispanics. It doesnât have race riots. Itâs not spending billions on âdiversity.â It isnât trying to turn unteachable Somalis and Hondurans into anesthesiologists. All the billions and all the incredible moral energy we waste on racial goose chases, the Chinese have used to build their country. Look at this comparison by the IMF of the sizes of our two economies. In 1980, just 40 years ago, Chinaâs economy was one ninth the size of ours. It zoomed past us five years ago, and is set to keep sailing ahead. Look up the longest bridges in the world. Four out of the top five are in China and the fifth is in Thailand. China has built a national network of high-speed trains. There is nothing like this thing in the United States. 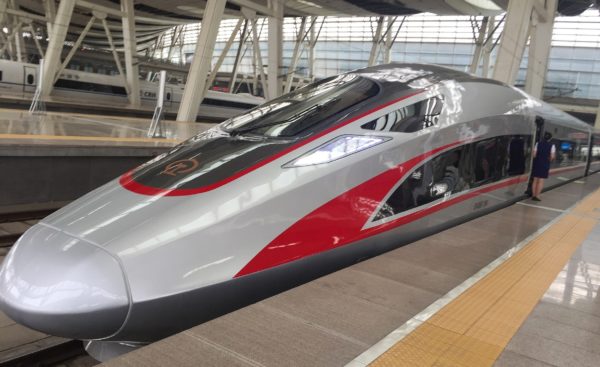 The colored lines on this map are high-speed rail with trains that go up to 200 miles an hour. China has more miles of high-speed rail than all other countries in the world combined. And every mile went into service just in the last 15 years. Has China neglected air travel? Nope. It has the biggest domestic air travel market in the world,and has plans to build 200 more airports in the next 15 years. But weâll sell them the planes, right? Good luck trying. China has just introduced the C 919 â as a direct competitor with Boeing and Airbus. Twenty-eight airlines have already ordered 815 of them.

If it ever comes to a shooting war, believe me, the Chinese are already laughing at the idea of affirmative action or diversity and inclusion. They have a simpler goal: Build the best and toughest army in the world. Weâre turning out social workers who carry rifles.

Our competitors are serious. They donât let low-IQ people immigrate. They donât rewrite their history or demonize their founders. They donât coddle people who hate them. If anybody ever talked about building something based on afrofuturism, theyâd put him in the nut house.

And the Chinese understand IQ. The Beijing Genomic Institute is leading the hunt for the genes associated with intelligence. And when they find them, the Chinese will use genetic engineering to make their people as smart as possible.

We canât compete with China while we are bound and gagged and hobbled by terrible taboos about race. Pretty soon we wonât be able to compete with, heck, Brazil. And thatâs why this is a taboo that could wreck our country. We Donât Have a Gun Problem. We Have a Race Problem.
Jared Taylor
• 329 Comments • Reply
← 'The Internet Is the Biggest Threat to ...'Everything You Learned About Thanksgiv... →
All Comments Hidden • Show  382 Comments • Reply
PastClassics