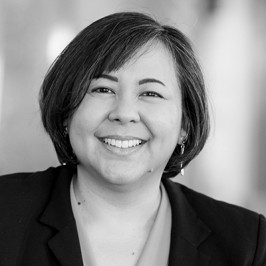 In a development of precisely no interest to the Main Stream Media, the antiwhite Southern Poverty Law Center ($PLC to VDARE.com) lost its founder, Morris Dees, longtime chairman Richard Cohen and several other top officers in a 2019 coup reportedly related to internal racial tensions and a sexual harassment scandal. Michelle Obamaâs former Chief Of Staff Tina Tchen (who got Jussie Smollett off the hook) was brought in to smooth things over, which seems to have resulted in the 2020 appointment of another childless first generation Chinese immigrant, Margaret Huang, right, [Tweet her] as the new President and CEO. Huang celebrated the election by tweeting âNow the hard work begins – we must eradicate racism and white nationalismââa.k.a. white identity. Something else the SPLC is eradicating from its website: any pretense that it was ever critical of black supremacism.

Thereâs precedent for this: in 1919, Vladimir Lenin gave a famous speech to a crowd of Soviet troops in Sverdlov Square, Moscow. In the foreground was Leon Trotsky and Lev Kamenev. During Joseph Stalin’s government, the photograph was edited to remove Stalinâs former rivals: 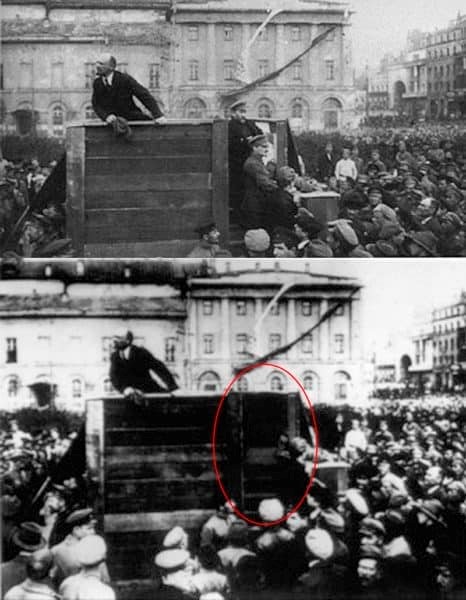 Similarly, as radical as the SPLC has always been, it’s now even more radical. It is erasing its own past in order to intensify its attack on the Historic American Nationâexactly like its Communist forbears.

The BLMania has made many companies and organizations “go Woke,” and commit to “furthering racial equity” in hiring, by giving away millions to non-white pressure groups, or shaming themselves for insufficient “anti-racism.” Needless to sayâespecially under the embarrassing circumstancesâthis trend reached the SPLC. Recently, it announced it would retire its “Black Separatist” category of “hate groups” because even the most anti-white black separatism isn’t “hate;” itâs “valid anger against very real historical and systemic oppression.” The SPLC explained that “groups formerly designated as Black Separatist will be characterized by antisemitism, anti-LGBTQ, male supremacy and whatever additional ideological categories most accurately describe their offending beliefs.”

The SPLC has already started to purge its website of anything that suggests “a false equivalency of equal hate on both sides.” [ Equity Through Accuracy: Changes to Our Hate Map, by Raven Hodges, SPLCenter.org, October 8, 2020]More changes are likely to come.

As recently as March 9, 2020, the SPLC had an “extremist file” on black nationalism, but explained that white nationalism is worse:

T]hey should not be seen as equivalent to white supremacist groups â such as the Ku Klux Klan or neo-Nazis â in terms of their history of violence and terrorism. And, unlike white hate groups, they have made virtually no inroads into the mainstream political realm and have virtually no supporters among elected officials. [Black Nationalist | Southern Poverty Law Center, Archive.org Link]

The SPLC called the Nation of Islam (NOI) “a leading example of a black nationalist group,” but said nothing about former Congressman and Bernie Sanders surrogate Keith Ellison, his ties to NOI, and his past call for a black ethnostate. However, the dossier did mention NOI’s anti-whiteness:

[T]he Nation of Islam [is] led by Louis Farrakhan. He has never backed away from the groupâs fundamental tenets, espoused by the groupâs previous leader, Elijah Mohammed, that white people are inherently evil â that they are “blue-eyed devils.”

Farrakhan has described Catholics and Jews, who he said practice a “gutter religion,” as preying on blacks. . .. In addition, he said, âWhite folks are going down. And Satan is going down. And Farrakhan, by Godâs grace, has pulled the cover off of that Satanic Jew and Iâm here to say your time is up, your world is through.â

Despite its extreme bias, until a few months ago, the SPLC was willing to criticize groups for being anti-white, however mildly. A version of the extremist file on black nationalism from February 22, 2018, included this:

Although the Southern Poverty Law Center recognizes that much black racism in America is, at least in part, a response to centuries of white racism, it believes racism must be exposed in all its forms. White groups espousing beliefs similar to black nationalists would be considered clearly racist. The same criterion should be applied to all groups regardless of their color.

The same explanation was included in an earlier version of the SPLC’s extremist file on black separatism, saved by the WayBack Machine on September 8, 2015, but with an additional quote:

Although the Southern Poverty Law Center recognizes that much black racism in America is, at least in part, a response to centuries of white racism, it believes racism must be exposed in all its forms. White groups espousing beliefs similar to black nationalists would be considered clearly racist. The same criterion should be applied to all groups regardless of their color.

As Martin Luther King Jr. once said: “Violence begets violence; hate begets hate; and toughness begets a greater toughness. It is all a descending spiral, and the end is destruction â for everybody. Along the way of life, someone must have enough sense and morality to cut off the chain of hate.”

But the two quotes above are now gone. The SPLC edited or deleted the pages they appeared. Now, you can only find them on the WayBack Machine.

But the sentiment expressed in those quotes was not uncommon in the SPLCâs past. In 1998, Senior Fellow Mark Potok said this:

[Louis] Farrakhan describes Catholics and Jews, who he says practice a “gutter religion,” as preying on blacks. He regrets the “tone” of a principal subordinate who calls for slaughtering white South Africans, but agrees with the message. He calls for racial separatism and inveighs against interracial relationships.

If a white group espoused similar beliefs with the colors reversed, few would have trouble describing it as racist and anti-Semitic. We hesitate with a group like the Nation of Islam because we recognize that its racism is largely a response to white racism.

But as Dr. Martin Luther King Jr. once said: “Violence begets violence; hate begets hate; and toughness begets a greater toughness. It is all a descending spiral, and the end is destruction â for everybody. Along the way of life, someone must have enough sense and morality to cut off the chain of hate.”

If we seek to expose white hate groups, we cannot be in the business of explaining away the black ones. [The Spreading Flood of Hate, March 15, 1998]

That passage has not been deletedâyet. I imagine that it slipped through the cracks, and will be deleted in due time, given the pattern of edits and deletions. [Archive.is link]

For example, there is no longer a “black nationalist” category at all. All groups categorized as such are now lumped in with âblack separatist,â presumably because âseparatistâ sounds less threatening. The âseparatistâ category is on its way out. But for now, the URL for the extremist file on âblack nationalistsâ now redirects automatically to the extremist file on black separatism. Put this URL in your browser:

And hit the return key. It almost immediately becomes:

The change was made in late March or early April, as shown by this “digital snapshot” from the WayBack Machine. 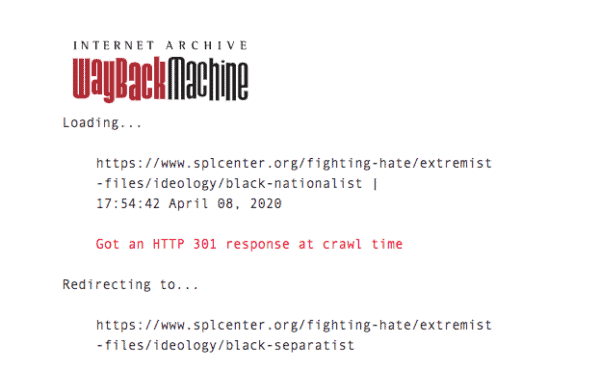 The groups listed are the same, as you can see from past versions of the extremist file on black nationalism, available through the WayBack Machine here. Where the URL for the black separatist extremist file “redirects” to once it is gone, remains to be seen.

Whether “nationalist” or “separatist,” the examples of anti-white racism from the Nation Of Islam, and explanations about how extremist groups of all races must be held to account, are gone. The dossier on separatists is now brief and vague. It mentions the “Covington Catholic” incident with no context and ends by blaming President Trump for fueling black separatism. Here it is in full:

The Black separatist movement is a reaction to centuries of institutionalized white supremacy in America. Black separatists believe the answer to white racism is to form separate institutionsâor even a separate nationâfor Black people. Most forms of Black separatism are strongly anti-white, antisemitic and anti LGBTQ. Some religious versions assert that Black people are the biblical âchosen peopleâ of God.

The activity among Black separatist groups in 2019 did not change much from last year. As in years past, Black separatists had no influence on mainstream politics or policy, unlike the white nationalist movement. Despite a few incidents that garnered national news attention, these groups continued to operate on the fringe of society, and as a reaction to institutionalized white supremacy.

In January 2019, Black Hebrew Israelites were in the national news after confronting students from Covington Catholic High School and Nathan Phillip, a Native American activist and Omaha elder, during the Indigenous Peoples March in Washington, D.C. The following May, Facebook permanently banned Nation of Islam leader Louis Farrakhanâs Facebook and Instagram accounts, citing his antisemitic rhetoric.

With the onset of the 2020 presidential election season, it is likely Black separatist groups will become more active in both online and offline spaces. If the charged political environment produces more racist rhetoric from the Trump campaign, it will only add fuel to these groupsâ recruitment pitches.

Specific examples of anti-white racism are gone, including the fact that the Nation of Islamâs theology is axiomatically anti-white. And there is no more mention of the SPLCâs duty to combat racism from all sides.