In an era in which every work of art is scrutinized by establishment critics according to prevailing political sensitivity, it is not surprising that the 2019 Nobel Prize in Literature is now mired in controversy. Perhaps calling it a controversy might be a bit of a stretch considering how little impact literature âor most art, for that matterâ has in public conversation these days, but it is still telling that the awardâs winner, Austrian writer Peter Handke, is facing the wrath of cancel culture.

What was Handkeâs transgression? His stance toward Serbia during the Bosnian War (1992-1995) and the Kosovo War (1998-1999). It is likely that his Slovenian heritage âhe is the son of a German soldier father and a Slovenian motherâ prompted him to defend his ethnic homeland, especially when Serbia waged war against the separatist ethnic Albanians in the province of Kosovo, a pro-independence âand clearly anti-Europeanâ effort backed by the Clinton administration and the North Atlantic Treaty Organization (NATO). It is just as likely that Handke was outraged because of the double standard so typical of these international crusades led by Western globalist governments, where a foreign leader is designated as this seasonâs Hitler (Milosevic, Assad, Hussein, etc.), a group of âfreedom fightersâ is identified and properly armed and supported (the ethnic Albanians, the anti-Assad forces in Syria, the ârebelsâ who destroyed Gaddafiâs Libya, etc.), and war crimes and atrocities are selectively played up or down by the subservient Western media.

Handkeâs collection of essays âA Journey to the Rivers: Justice for Serbiaâ is a slim tome that was published in Germany in 1996 and then translated to English the following year. It has never been reprinted since and copies go for $1,000 on Amazon. Based mostly on his experience travelling through the country, Handke expounds on how the media ârelentlessly portray the Serbs as evil.â These fair observations are nonetheless undermined by his one-sided view of the conflict between Serbs and Croats. Handke pans Croats almost as unilaterally as the mainstream media maligns the Serbs.

In a subsequent interview with the left-wing French newspaper Liberation in 1996, he went even further. âTrue, there were intolerable camps between 1992 and 1995 on the territories of the Yugoslav republics, especially in Bosnia,â he said. âBut let us stop automatically connecting these camps to the Serbs in Bosnia. There were also Croat camps and Muslim camps, and the crimes committed here and there are and will be judged at The Hague.â

Handke is an accomplished novelist and playwright, but interestingly enough, his career as a screenwriter of films like German director Wim Wendersâs acclaimed âWings of Desireâ came to a halt shortly after he made his views on Serbia known.

A few years later, liberal establishment writer Salman Rushdie zeroed in on Handke and nominated him for an âInternational moron of the yearâ award for his âseries of impassioned apologias for the genocidal regime of [Serbian President] Slobodan Milosevic.â By then, Handke was already getting the full non-person treatment by fellow mainstream writers, ever so diligent when it comes to shunning those who deviate from liberal orthodoxy. As it is, Rushdie ended up granting his inane award to actor Charlton Heston for his work as president of the National Rifle Association.

Milosevic died in prison while awaiting a trial for genocide and war crimes at The Hague, where Handke visited him. Handkeâs final politically incorrect gaffe was attending Milosevicâs funeral in PoÅ¾arevac, Serbia in 2006, where he delivered a eulogy.

The unexpected awarding of the Nobel Prize to Handke has unleashed a virulent wave of criticism. In the interim between the end of the Kosovo War and 2019, freedom of speech in the West has suffered increased attacks. European countries in particular have strengthened their so-called hate speech laws and debate of certain topics as well as adopting some political stances is simply impossible unless you are willing to face censorship, hefty fines, and imprisonment.

The award was even more surprising considering how the Swedish Academy was just coming out of an embarrassing #MeToo-type scandal last year in which the husband of one of its members was accused of rape. The academy had to cancel 2018âs prize announcement and, as part of its public atonement campaign, its members committed to be less âmale-orientedâ and âEurocentric.â

One of the first organizations to object to Handkeâs Nobel was Pen America, which describes itself as standing âat the intersection of literature and human rights to protect free expression in the United States and worldwide.â

PEN America President Jennifer Egan issued a statement on behalf of the organization. âWe are dumbfounded by the selection of a writer who has used his public voice to undercut historical truth,â the statement said. âAt a moment of rising nationalism, autocratic leadership, and widespread disinformation around the world, the literary community deserves better than this. We deeply regret the Nobel Committee on Literatureâs choice.â

The condemnation is double-fold because not only it rejects Handkeâs apparent questioning of âhistorical truthâ but the fact that the prize is being awarded at a time of ârising nationalism.â In Pen Americaâs view, it goes without saying that nationalism is something to be denounced.

The attack is in line with the stated rationale for American and European intervention in the Kosovo War twenty years ago, which led to NATOâs aerial bombing of former Yugoslavia for 78 straight days. Needless to say, since the Western establishment has designated the Serbs as the main culprits in this conflict, the crimes committed against them are not even acknowledged when condemning supposed Serbian âapologistâ Handke. Nationalism is a mortal sin and the Serbian peopleâs fight to preserve the unity of their state is to be forever repudiated.

As United States Gen. Wesley Clark, Supreme Allied Commander Europe of NATO from 1997 to 2000, said shortly after the war in Kosovo started: âThere is no place in modern Europe for ethnically pure states. Thatâs a 19th-century idea and we are trying to transition it into the 21st century, and we are going to do it with multi-ethnic states.â

One has to wonder what Clark thinks of the more ethnically homogeneous state of Israel considering he comes from a long line of rabbis. According to a story from the Jewish Telegraphic Agency during the time when Clark was trying to use his âwar heroâ status to run for President in the Democratic Party primary of 2003, he ârevels in his Jewish roots.â

Clarkâs troubling statement about multi-ethnic states, which did not get much play by mainstream media, did catch the attention of more perspicacious commentators like the late paleocon writer Sam Francis, who saw through the incipient attempts to suppress identity and homogenize cultures on a global scale. âIn that order, particular identities â race, religion, ethnicity, nationality, cultural tradition, class, gender and any other category that distinguishes one âpersonâ from another â will be forbidden. There are enough statements on record from the architects and prophets of this new order to know that national sovereignty itself will have vanished. And the order will not just be somewhere else, it will be everywhere, including in what used to be the United States,â Francis wrote in 1999.

It is no mystery that awards in the arts are politicized and hence not surprising that numerous writers or even the average reader responding to bombastic media accounts have joined Pen Americaâs repudiation of Handke. As of this writing, more than 40,000 people have joined in on the hysteria and signed a petition asking the Academy to revoke the prize.

It is more unusual, however, to see academics from other disciplines join the fray. Take, for example, American historian Deborah Lipstadt, a Jewish ethnic activist whose main claim to fame is her storied libel trial against her British colleague David Irving. With her characteristic lack of nuance, Lipstadt tweeted on October 13, 2019: âA Novel (sic) Prize to a Genocide denier. How did this happen?â and a few minutes later tweeted again: âWhereâs the outrage?â 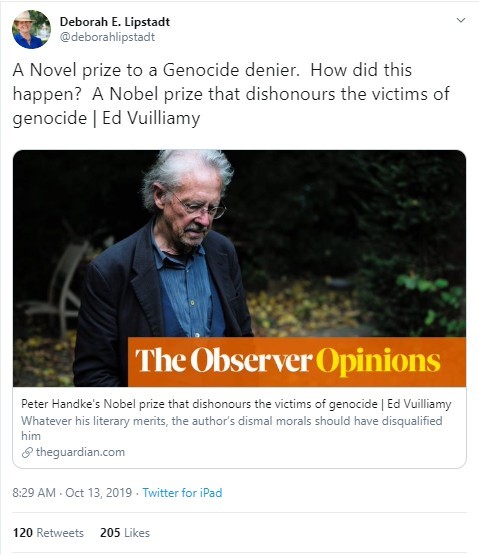 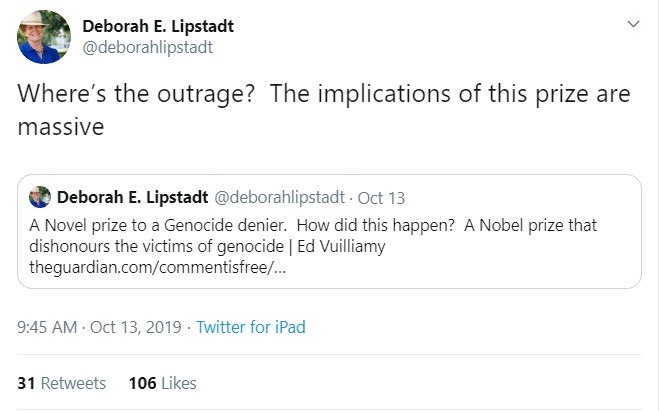 In a letter to The New York Times published five days later, Lipstadt criticized a column in defense of Handke, claiming that its writer ignored âthe immense platform or megaphone the Nobel committee has awarded Mr. Handke. There will be those who will be convinced that his false claims must have some legitimacy, simply because he is a Nobel winner.â

The Swedish Academy has a long history of snubbing deserving recipients of the Nobel Prize in Literature. It has been said that the Argentinean writer Jorge Luis Borges, an author whose short stories and essays displayed a breadth of erudition and inventiveness that earned him international recognition, was nevertheless denied the Nobel due to his politics. As the Argentinean once said, âNot granting me the Nobel Prize has become a Scandinavian tradition.â Critics have since speculated that Borges was shunned by the Swedish Academy for his conservative political views and his admiration for strongmen like Spainâs Francisco Franco, Chileâs Augusto Pinochet, and Argentinaâs Jorge Rafel Videla.

Spanish philosopher and writer Miguel de Unamuno, one of the most influential men of letters in the Spanish-speaking world, is also said to have been skipped over by the Swedish Academy due to an apparently unforgivable political sin. One of Unamunoâs admirers was the young leader of the nationalist Falange movement, JosÃ© Antonio Primo de Rivera. In spite of being a strong defender of Western culture, Unamuno was not aligned with any particular political movement and yet he accepted Primo de Riveraâs request to meet in early 1935. Unamuno was impressed by his young admirerâs intelligence and publicly praised him, describing the Falangist leader as âvery talentedâ and capable of accomplishing anything he wanted. According to Unamunoâs biographer Francisco Blanco Prieto, meeting with Primo de Rivera and attending one of his rallies likely cost him the Nobel.

It is pointless to speculate why Handke obtained the worldâs most prestigious literary award amid an inquisitorial political climate. What we can expect, however, is that the Nobel will ultimately succumb to the same cooptation of other literary prizes as more writers follow the diktats of the political institutions that grant them subsidies, history as a discipline conforms to an official narrative, and the arbiters of artistic excellence are compelled to operate like commissars and censors.

Subscribe to All CÃ©sar Keller Comments via RSS
PastClassics