I know what Minneapolis is going through tonight. I was born in Newark, New Jersey, in 1948. In those days, it was a vibrant medium-sized city in the New York metropolitan region. It was over 80% white. We had a huge Jewish population, mostly settled in the Weequahic section of town, a predominant Italian population and large numbers of Germans and Slavs of various types, by my recollection mostly Poles and Ukrainians.

It was a wonderful place. It was in fact truly âdiverseâ and an interesting place to live. In Newark and neighboring Irvington we had two German-language movie theaters, a Polish theater and an Italian theater. We had access to some of the best bread I have ever tasted, made fresh every day in the ethnic bakeries. Our delis were famous, as were our ethnic butcher shops. Our schools were first class. The future New York City Mayor Ed Koch was a graduate of Newark public schools.

What our elites like to call âThe Great Migrationâ (and weâre not allowed to call âThe Great Replacementâ) had already hit Newark by then and the Central Ward had begun to rot. The elites, even then, did not blame the new inhabitants of the ward for the rot, it was the âlandlordsâ who were to blame, we were told. People who only cared about profits. The landlords, on the other hand complained that the new tenants they were now willingly renting to were wrecking their properties.

Riding through the ward, as I did many times in the 1950s as a child, it seemed that the landlords were correct, the beautiful front doors of the old brick homes were smashed in because someone had forgotten a key, windows were smashed out. Garbage was everywhere. When we drove a few blocks into a neighborhood that was still Italian or Slav or Jewish or German, the same old homes were maintained by the tenants, they had beautiful window boxes overflowing with flowers and no garbage was on the streets.

Amazingly, the folks who were not so âgreatâ were able to keep a neighborhood decent, worthy of living in.

The migration that was changing Newark forever, that would cause it to lose 200,000 residents between 1950 and the present, was to us not, âThe Great Migrationâ bringing precious diversity to our benighted city. It was in fact âThe Great Invasionâ of people so alien, so primitive, and so in contrast with our concepts of how to live in a civilized society that it led to the âGreat Flightâ of over 200,000 white residents of that once great city and the total collapse of its school system.

The Great Invasion also had its violent, almost military side. As an elderly Ukrainian food truck operator told me in 1967, âthis is a slow genocide, every week a few of us are murdered and many more sell our homes and run for the shore.â

It was just that, and then came the riots. Our liberal elites would have us believe that the Newark Riots were the result of âracism.â And indeed, racismâon both sidesâplayed a part. 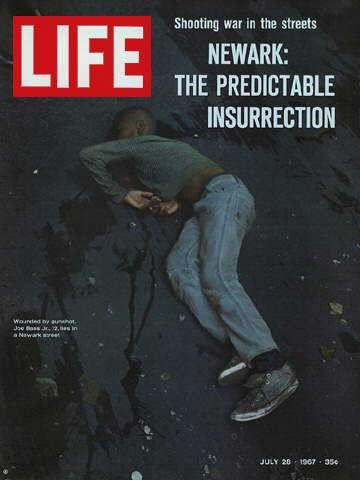 The first riots, which took place in 1967 while I was working my way across the Atlantic on an Israeli freighter, were sparked by the arrest of a black cab driver for a relatively minor traffic incident. Rumors started that he had been beaten and even killed. It was a very hot night, almost nobody in Newark had air conditioning in those days and both white and black were on their stoops or porches to get some relief from the stifling heat. Protesters appeared at the police station where the black guy was being held and things went crazy.

The city blew up. Whites in mixed areas hunkered down in fear. White shops were looted and burned by the black mobsâthere was the real racism, the deliberate targeting of white-owned shops for looting and destruction. black-owned shops were spared. And since there was no rioting in areas as yet to be enriched by âThe Great Migrationâ there were no lootings of black-owned businesses by whites, no attacks on blacks.

Although the Left now denies it, the âGreat Migrantsâ used hunting rifles to snipe at Newark Police and New Jersey National Guardsmen sent in to reestablish the peace [See Police used the myth of black snipers to justify brutality in the Long Hot Summer of 1967, Peter Blackmer, Medium, August 11, 2017 and Newark Riot Deaths at 21 As Negro Sniping Widens; Hughes May Seek U.S. Aid, by Homer Bigart, New York Times, July 16, 1967] Liberal Democrat Governor Richard J. Hughes was so dismayed by the violence, by the rampant destruction of property, that he reportedly gave the National Guard the right to use machine guns against the rioters. [Newark Riot Toll Hits 16; 650 Injured With Battle In 4th Day, by Robert TK, Desert Sun, July 15, 1967.] MGs were almost certainly used against the snipers.

When the riots ended, mass white flight began. As a Jewish friend described it to me, the summer and fall of 1967 gave rise to âThe Second Exodus.â According to him, Weequahic High School, which had been about two-thirds white/Jewish when school ended in June 1967 had tipped to two-thirds black when school started again in September 1967. By the end of the school year it was almost all black.

Some areas of Newark held out against âThe Great Invasionâ longer, Slav/German Upper Vailsburg until the 1980s, St. John the Baptist Ukrainian Catholic Church with its school serving as one anchor for the European-American community. The wonderful old babushkas of St. Johnâs produced homemade pirohe every Thursday and Friday afternoon, smothered in butter. I can still taste them. That was real diversity.

But increasing crime on the street led even these last holdouts to flee. The city, my home city now has a tiny (8.8%) white minority made up mostly of hold-out Italians in the North Ward and Portuguese in the Ironbound section.

The school system has become a joke, a parody of what public schools should be. In the early 1970s I worked for two years as a substitute teacher in the school system. In one High School I was instructed to give a pink slip for detention to any students caught having sex in school hallways. They got detention for causing a âfire hazardâ by blocking the halls. In one elementary school I intercepted a note from a cute second grade girl to a boy in her classâits message? âI love your dick, please donât give me no baby.â Lost childhoods in the ghetto.

Another side-effect of âThe Great Migrationââin one Junior High, I witnessed a very good black male student harassed for wanting to get good grades, for âacting white.â This is a school where most students would not even write their names on test papers, let alone actually take the test.

The boy, whose father was an Army veteran and believed in discipline and success, could not take the harassment anymore and went berserk. He came into school with a .38 revolver to get revenge on his tormentors. I was on hall duty as he entered the school. âLeave me alone, Mr. B, this isnât for you,â he said.

I left him alone. I ran to the office and called the police. They took their time getting to the school since they (by then mostly black) didnât want to risk getting shot.

The best kid in the school shot his tormentor, luckily not fatally, and probably ruined his own life.

Since Mayor Hugh Addonizio was sent away for corruption in 1970, Newark has been ruled by black mayors, one of whom was âSpartacusâ Cory Booker. Booker is one of the few who has not ended up like Addonizio, in the clink. Perhaps his time is yet to come. He is allegedly presidential timber.

My native city is now a ruined shell of what it was when I was born. Our elites can tell me all they want that I and my town benefited from âThe Great Migration.â All neutral metrics show the opposite.

âThe Great Invasionâ created a less diverse, almost monolithic black Newark replete with food deserts and areas so dangerous that even the (black) police donât like to enter them.

A warning for all of America that âGreat Migrations,â and âGreat Replacements,â might not be that great at all.

Thanks to current immigration policy, coming to an America near you.

Anthony Boehm [Email him] is a federal civil servant. Irresponsible Dem/ MSM Complex Tells Childish Blacks to RiotâSo They Do. Whose Fault Is That?
Lance Welton
• 12 Comments • Reply
OK, Letâs Give Them ReparationsâIf ... →
Hide 37 CommentsLeave a Comment
"The Great Replacement: Newark NJ vs. Minneapolis MN"
• 37 Comments
Commenters to Ignore
Commenters to ignore (one per line)

OK, Letâs Give Them ReparationsâIf ... →
Current Commenter
says:
Current Date at Time Now
Leave a Reply - Comments on articles more than two weeks old will be judged much more strictly on quality and tone
Cancel Reply
Commenting Disabled While in Translation Mode

Subscribe to All Anthony Boehm Comments via RSS
PastClassics