When Ed Buck, a white, gay Democrat donor, was accused of “racism” in his relations with young black men (they kept dying of drug overdoses at his house), I wrote that the weird thing about Buck’s denial of racism is that he’s a racial fetishist, like Jeffrey Dahmer. Dahmer, a gay serial killer and cannibal, victimized mostly young men of color.

Responding to the SPLC’s repeated charges of “racism” at CIS, Mark Krikorian said on a panel in 2010 that:

The accusation of racism is the most serious charge you can make against someone in modern America, comparable to accusations in the past of being a leper, a witch or a communist. The charge of racism is so incendiary that even mass murderer Jeffrey Dahmer felt it necessary to deny that his crimes were motivated by it. This man, a cannibalistic, necrophiliac killer, went to great lengths to assure a relative of one of his victims that, in her words, quote, ‘He was not a prejudiced person. It wasn’t out of race that he killed these young men,‘ unquote.” [Links added]

The new Netflix series about Dahmer, Monster, has led to some racism thumb-sucking:

Monster has become one of the streamerâs most-watched series since debuting on Sept. 23 and criticism over the show has grown as quickly as its popularity. Critics have questioned the need to revisit the story of a serial killer who targeted young men who were primarily Black and brown. Much of the discussion has focused on the way in which systemic racism allowed Dahmer to continue killing men. Some family members of the victims of Dahmer have also spoken out against the series, saying it has retraumatized them. The series also came under fire after Netflix tagged it as âLGBTQâ content (as drama over this choice arose on TikTok, Netflix quickly removed the label).

Canât stop thinking about this disturbing scene from DAHMER where one of Jeffrey Dahmerâs victims finally manages to escape… and the police actually bring him back inside the apartment.

Of course, the point of Jeffrey Dahmer’s choice of victims was that he liked young men of color, and had a racial fetish for them, and if he hadn’t been a cannibalistic, necrophiliac killer, that would have been fine, because homosexuality, once considered perverse, is now an uncriticizable, sacred, protected category.

The police in the Netflix clip above didnât help the victim Konerak Sinthasomphone, a non-English-speaking refugee from Laos) back into Dahmerâs apartment after he was found âwandering dazed and naked on the corner of 25th and State in Milwaukee, Wisconsinâ when Dahmer told them he was he was Dahmerâs âdrunk loverâ because they loved whites or hated young immigrants of color, but because they, like all police by 1991, had been told not to interfere with homosexuals and their private affairs [Who Was Konerak Sinthasomphone, the Jeffrey Dahmer Victim Who Police Returned to the Killer’s Home? People Magazine, October 13, 2022]

The quote CISâ Krikorian referenced above is from Why Jeffrey Dahmer Killed So Many Black Men, Jet Magazine , December 19, 1994, Page 14.

Jet Magazine, a magazine for and by blacks, included pictures of the young black male victims. 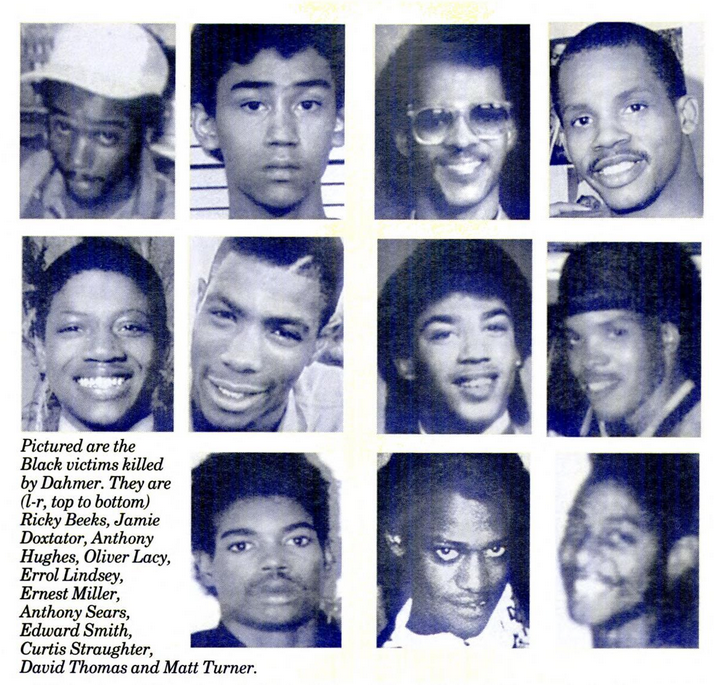 Also pictures of the young male victims who were non-black, including one Hispanic and Laotian immigrant Konerak Sinthasomphone. 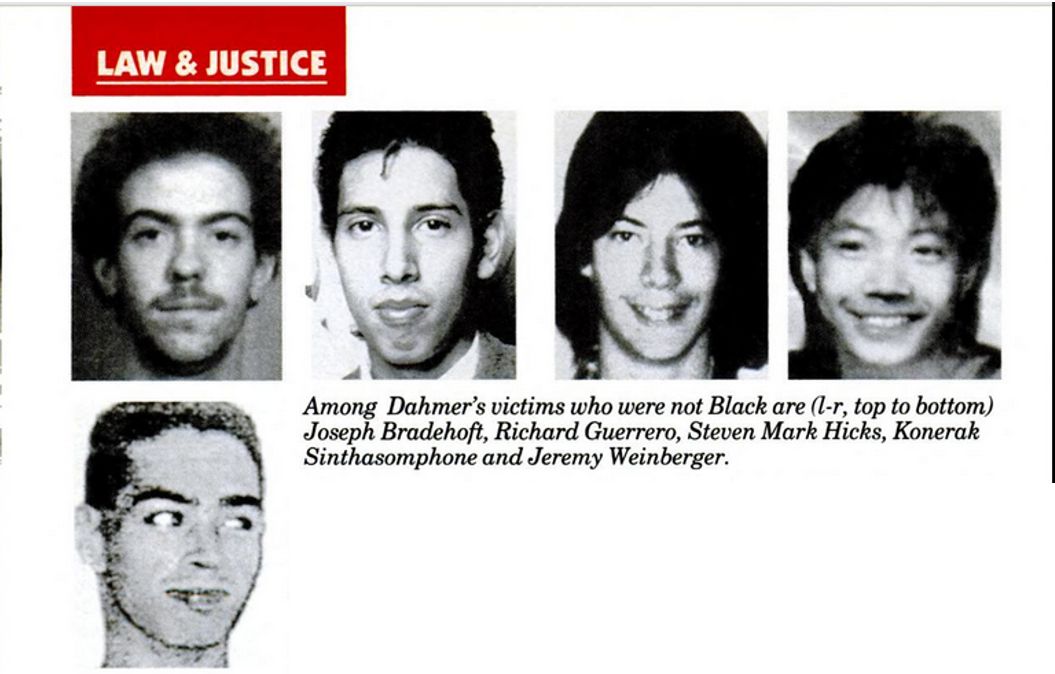 A liberal New York studio audience cheered when they heard from SNLâs Norm MacDonald, below, that mass murderer Dahmer had himself been murdered in prison. (Wisconsin, where Dahmer killed 17 people, doesn’t have the death penalty.)

Here’s the guy who killed him, Christopher Scarver. 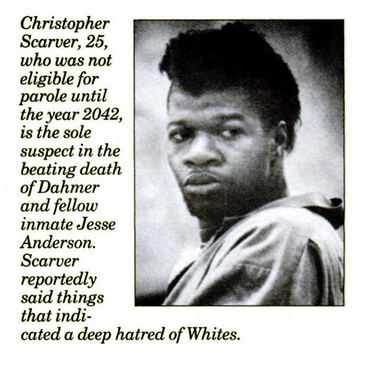 Jet Magazine, a magazine for and by blacks, was willing in 1994 to state Scarver’s motivation, a generic hatred of white people. The Wikipedia article on Dahmer’s death doesn’t currently mention that.

His hatred of whites does get a mention in Scarverâs own Wikipedia page:

It is believed that Scarver murdered Dahmer and [Jesse] Anderson, who were both white, because of Dahmer’s murders of black males and because Anderson had stabbed his wife to death and attempted to frame two black males as the perpetrators of the attack. Scarver was quoted as having said, “nothing white people do to blacks is just.”

The original crime that put Scarver in prison was a work-related (and by work, I mean Wisconsin Conservation Corps training program) robbery and murder, in which the victims were two white men, one of whom, Steve Lohman, died:

According to court records, the motive in the killing that put Mr. Scarver in prison was robbery and vengeance against a job-training program that he thought had wronged him. The records show that Mr. Scarver shot a 27-year-old job-training worker four times in the head and then, at gunpoint, forced the program site manager [John P. Feyen] to write him a check for $3,000. He fled with the check, $15 in cash and the manager’s credit card.

This killing follows a pattern familiar to me as a chronicler of what Iâve termed âDisgruntled Minority Massacresâ, in which a âblackâor other minorityâemployee or co-worker reacts with crazed violence to normal workplace actions like being fired or disciplined.â

[Scarver] dropped out of James Madison High School in the 11th grade and enrolled in a one-year Conservation Corps job program as a carpenter trainee.

He told investigators and [court-appointed psychiatrist] Dr. Crowley that after he had completed the program, a supervisor told him he would be hired full time. But the supervisor was dismissed and Mr. Scarver was not hired. Mr. Scarver said he blamed the site manager, John P. Feyen, for his troubles.

Mr. Scarver said that after he lost his “job” at the program, he began to drink three 40-ounce bottles of beer every day and smoked at least four marijuana cigarettes a day.

Dr. Crowley testified in court: “He began to brood about it. He felt that there were racial overtones involved.”[ Emphases added?]

The murder and robbery based on racial resentment put Scarver the same prison with two white killers who could also be considered racist.

So while Dahmer wasnât a racist, Christopher Scarverâstill in a maximum security prisonâwas and is. But no one is asking thatâexcept us here at VDARE.com.

James Fulford [Email him] is writer and editor for VDARE.com.