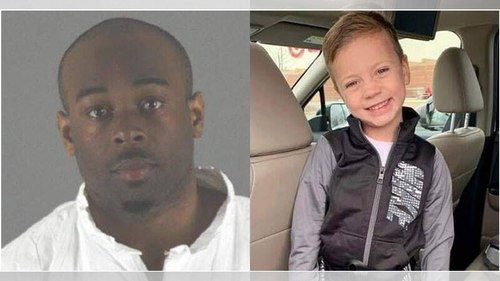 Emmanuel Aranda, a black man living in Minnesota, is alleged to have thrown Landen Hoffman, a white five year old, off the third floor of the Mall Of America. The boy is still alive but Aranda has been charged with attempted murder. [Boy, 5, Who Was Thrown off Mall of America Balcony Is Making Steps Toward Recovery, Inside Edition, April 18, 2019] (Itâs likely that only a child that young could have survivedâan adult who falls forty feet is usually Dead Right There). Significantly, however, this incident not being treated as a hate crime by police or the Main Stream Media. Thatâs because of Black Privilegeâand it means this sort of thing will continue.

Emmanuel Aranda is quoted by prosecutors as admitting his guilt, saying that he originally meant to do it to an adult, because heâs been rejected by women he had approached (i. e. harassed) in the mall. Prosecutors failed to say if the women he was harassing were white. Aranda had previously been removed from the mall and had a long record of trouble with the law. [Complaint: Man went to Mall of America intending to kill, Canadian Press, April 15, 2019]

Aranda is clearly bad, and dangerous personâSteve Sailerâs response (Maybe We Need More Mass Incarceration?) is the only correct one.

But while Aranda may be guilty of this assault, the people responsible are the judge and prosecutor back in his home town of Chicago who failed to put him in jail for his first assault conviction there. In Chicago, however, the justice system is apparently more concerned with not arousing the anger of blacks and âCivil Rightsâ organizations than with protecting the public. Call it Black Privilege.

All over America, there are âCivil Rightsâ organizations attacking police for enforcing the law, and attacking victims for calling the police, backed by a Main Stream Media which thinks that any law enforcement action that falls on a black is ipso facto racist.

So those Civil Rightsians and âanti-racistâ crusaders are ultimately responsible for this and many similar attacksâfirst, by telling whites that itâs wrong to be suspicious of blacks, and second, by convincing blacks that anything that thwarts them in any way is racist.

I once read a novel by Britainâs Gavin Lyall about the problems of maintaining security at military basesâlike Fort Hood. He wrote that

There isn’t a military organization in the world where a loud enough shout from a high enough rank can’t bypass the most elaborate security arrangements. You can spend as long as you like telling sentries to demand passes, authorizations, identificationsâbut you’ll always have spent longer telling them to jump when a colonel says jump.

What we have is a whole society was telling police and business owners to jump when a member of a minority group cries “Racism!” 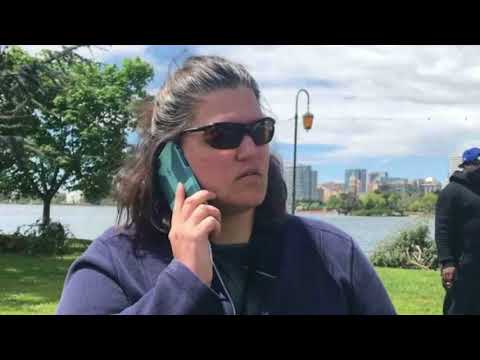 Take the recent MSM-promoted hatred for âBeckysââwhite women express any suspicion of blacks, or who question blacksâ rights to do exactly as they please. One of the earliest was âBarbecue Beckyâ, a woman who told blacks that they were in a part of an Oakland CA park where charcoal barbecuing was not allowed, and when they refused to leaveâbecause blacks assume being asked to leave is racistâcalled the police.

Now, the point of a âcharcoal barbecueâ is that it involves lighting a fire using live coals and accelerant, which could have deleterious effect on the grass and trees seen in photographs of the incident. The point of having fire safety rules is that people die in fires. [Woman Calls Police On Black Family For BBQing At A Lake In Oakland |Their crime? Using the wrong type of grill in a barbecue-designated zone, by Carla Herreria, HuffPost US, May 11, 2018].

They feel this way because theyâre sacred in America. 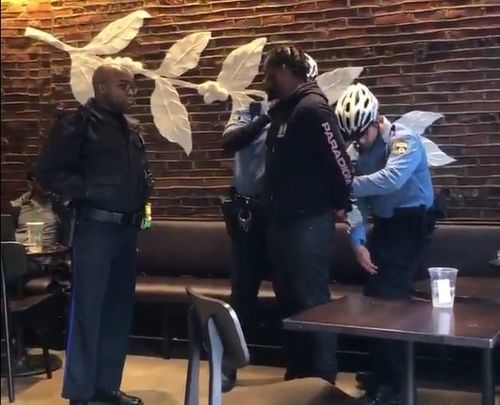 In the Philadelphia Starbucks incident, two black males were arrested because they refused to leave a coffee shop after being asked. They were asked to leave because they were sitting there without buying anything, and wanted to use the washroom. (It may be that they both wanted to use a one-person washroom at the same time):

âHi, I have two gentlemen in my cafÃ© that are refusing to make a purchase or leave.â

They wouldnât leave when asked because they really believe in the âracismâ narrative that anyone who asks a black person to leave is a racist, and anyone who refuses to leave is somehow Rosa Parks.

Steve Sailer put it this way, in response to a Washington Postarticle titled Starbucks and the elimination of black people from white spaces, by Karen Attiah (a Ghanaian-American) April 18, 2018]: Isnât it time that the full might of the state was brought down on the real threat: convenience-store managers, mom-and-pop restaurants, and school officials?

So as long as a black person isnât brandishing, say, an AR-15, they are legally and morally entitled to be wherever they feel like. Itâs like how the Zeroth Amendment says that undocumented workers can idle in the United States and citizens canât do anything about it. The Negative First Amendment says blacks, as long as they arenât armed, can be anywhere they want for as long as they want, and just because you happen to own the property they are on, you canât do anything about it, because you are white.

The Narrative of Black Innocence and White Guilt Is that any kind of protection of the public is considered racist is blacks are disproportionately affected. 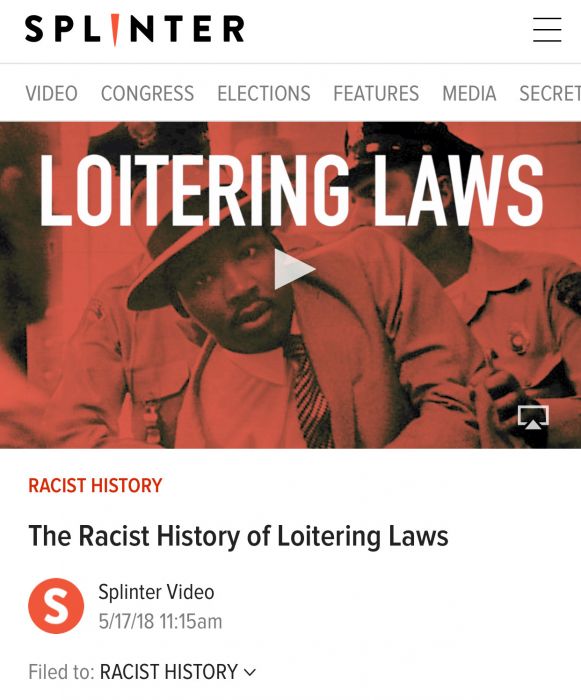 Itâs racist not to want a bus stop bringing poor people to your mall, because the poorâand frequently criminalâpeople are black:

That mall was Walden Galleria in Cheektowaga near Buffalo, NY. They agreed to make their mall more accessible. You can view the result below:

Or read about it here: Brawls at the mall: When violence has erupted at the Walden Galleria, Buffalo News, December 27, 2018, which lists four recent incidents:

That story has no reference to what happened in the 1990s, when that mall was harder to get to, and thus safer.

Indeed, the whole concept of Mall Security is racist, and probably the cops are racist, too.

Hereâs how Officer Tim Garcia came to be fired for being caught using bad language as recorded by his body camera:

The mall’s security guards called police after [Dewaxne] Robinson got “aggressive and confrontational with mall patrons as they were walking by,” according to the report. That behavior allegedly included “using vulgar language” and “threatening patrons.”

Robinson told the officers he felt he was being harassed by the mall’s security guards, who he said told him to leave and were following him as he tried to exit.

Garcia then told Robinson that he needed to comply with the mall guards’ orders or else he could face arrest.

So hereâs the dialogue, as reported by the San Antonio Current. It very much supports the idea that Robinson is the kind of guy who uses vulgar language and threatens patrons. Possibly white patrons, of course.

As he and his partner spoke with the guards during the arrest, Garcia and Robinson argued back and forth.

“You know what’s bull***t?” Garcia can be heard saying in the video. “The way you were raised is bull***t.” 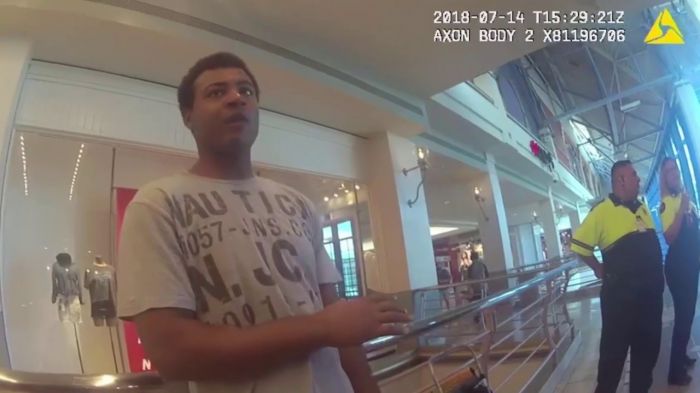 If you read this in the original, youâll see that the Current, while putting a dash in the F-word in the headline, doesnât feel any need to obfuscate âbull***tâ. They do, however, have a lot of dashes in the next part, but this time not in the F-word, either. So asterisks above and below are added by me, and the dashes (which replace the syllable âiggâ) are added by the Currentâbecause blacks are sacred, and the Deplorable Word in question is a profanation of their sacredness:

After Robinson complained about his arm being twisted in the handcuffs and referred to Garcia as “nâa,” the officer mocked him and reportedly said, “Nâa? Do I look like your nâa? Say it right. Put an ‘r’ at the end. If you’re going to say it, don’t call me nâa. I ain’t your nâa.”

At one point, according to the report, Garcia called Robinson a “f***ed up nâa.” He also allegedly told Robinson, “F*** you too. Here, here, this is the police telling you, ‘F*** you.’ How do you like that?”

The body cam video can be viewed here Leaving aside the language, the point is that Dewaxne (really his name) a large dangerous young man who refused to leave, objected to the white guards who asked to leave following him to make sure he did, and when he was arrested by a Hispanic cop, referred to him as ânâaâ, which is eye-wateringly racist when white people say it, but when Dewaxne says it, is covered by whatâs known as âN-Word Privilege”âa special form of Black Privilege.

So thatâs what happens when a disruptive, dangerous young black person is removed from a mall: A cop loses his job. What else can happen when disruptive, dangerous young blacks are removed is a âprotestâ, which if youâre lucky wonât involve blood or broken glass. [Wolfchase Galleria changes tune as activists protest hoodie arrests, by Ryan Poe, Memphis Commercial Appeal, December 3, 2018]

So if youâre asking what Minnesotaâs Mall of America can do to prevent crimes like the one Aranda is charged with, the answer, right now, is ânothing.â

I mean, the mall tried. They had him removed from the mall twice after he assaulted women, but he didnât get any jail time and they had no way of keeping him out.

And whites are being trained not to be on the alert when a strange black person approaches.

In these conditions, I suggest that whites with children consider adopting the strategy suggested by Michael Moore (in his book Stupid White Men) for blacks to avoid being âracially profiledâ: do your shopping online.

Iâve covered these issues on VDARE.com for years (see Disparate Impact: Legal And Political, Civil Rights Law Doesn’t Care If You Die, and Profiling Is Wrong No Matter HOW Right It IsâAs Ex Drug Dealer And Thug Jay-Z Explains). The bottom line: as long as blacks are accorded Black Privilege by our Ruling Class, nothing can be done about these problem.

Because, for the Ruling Class, Emmanuel Aranda isnât the problem. You and I are.

James Fulford [Email him] is a writer and editor for VDARE.com.

Race: A Very, Very Dismal Reality
Fred Reed
• 633 Comments • Reply
← Why No Stories About Whites Fearing â...Memorial Day Is About Americaâs Falle... →
Hide 195 CommentsLeave a Comment
"The Fulford File: Black Privilege Is Ultimate Cause of Minnesota Mall Atrocity"
• 195 Comments
Commenters to Ignore
Commenters to ignore (one per line)

← Why No Stories About Whites Fearing â...Memorial Day Is About Americaâs Falle... →
Current Commenter
says:
Current Date at Time Now
Leave a Reply - Comments on articles more than two weeks old will be judged much more strictly on quality and tone
Cancel Reply
Commenting Disabled While in Translation Mode