New York Governor Andrew Cuomo has blamed the âfar-rightâ Proud Boys âand, needless to say, President Trumpâfor the violence that followed Proud Boys founder (and VDARE.com contributor) Gavin McInnesâ recent Metropolitan Republican Club speech. Cuomo called for a federal investigation and assigned âhate crimesâ detectives to the case. [Proud Boys Fight at G.O.P Club Spurs Calls for Inquiry; Cuomo Blames Trump, by Ashley Southall and Tyler Pager, New York Times, October 14, 2018] The pattern is now absolutely clear: as at Charlottesville, Leftist local governments will not defend patriots from Antifa attacks. This is what the much-missed Sam Francis called âAnarcho-Tyrannyâââwe refuse to control real criminals (that’s the anarchy) so we control the innocent (that’s the tyranny).â In the streets and campuses of America, Cultural Marxist totalitarianism is upon us. Only Trumpâs Department of Justice has the power to turn it back.

Rhetorically at least, the GOP has been calling the Left what it is. A new ad identifies the far-Left as a âmob,â combining to great effect declarations from Democrats like Maxine Waters, Eric Holder and Nancy Pelosi with clips of rabid protesters and violent Antifa.

The Left: An Unhinged Mob. pic.twitter.com/d4YhXrAsXe

The response from the Main Stream Media: hyperventilating outrage. Indeed, the curious Narrative is being developed that it is illegitimate to use the term âmobâ. [The âDonât Call It A Mobâ Supercut Video, by John Sexton, Hot Air, October 11, 2018]

Even Matt Lewis, a cuckservative who has built a career backstabbing the authentic American Right, was contemptuously told to âshut upâ by Don Lemon and invited to âleave the show if you wantâ when Lewis gently suggested that chasing Ted Cruz out of a restaurant was âmob-like behaviorâ. [CNNâs Don Lemon Tells Daily Beastâs Matt Lewis To âShut Upâ After Being Called Out For Liberal Bias, by Nick Givas, Daily Caller, October 10, 2018]

Yet the real give-away came when Don Lemon spelled out what he thought was the real definition of a mob: âThe real mob is not Democrats but a mob of white supremacists who killed a woman in Charlottesville,â he intoned, referencing the Unite The Right protest in August 2017. âKilled. Killedâ. [Don Lemon Educates Donald Trump On The Real Definition Of A Mob, by Lee Moran, Huffington Post, October 10, 2018]

It was in this atmosphere of chaos and surrounded by Antifa that James Fields hit the gas pedal. As Ann Coulter noted: âHistory has shown that itâs a big mistake to stop your car for protesters. Sooner or later, you get pulled out and beaten to death or nearly so.â

Charlottesville was the culmination of a long process. Beginning with the very day President Donald Trump was inaugurated, Antifa have been in a continuous tantrum, with the MSM egging them on. Thus Journofa giggled at the Inauguration Day attack on Richard Spencer (DC police failed to find the culprit although it was recorded on camera) and lionized far-Left protesters, even when Antifa attacked journalists themselves. [âAnti-Fascistsâ Are Also âAnti-Journalists,â by Gregory Hood, American Renaissance, August 15, 2018] Not surprisingly, ad-hoc formations of right-leaning street protesters were created in response, with the result that wild street brawls have become relatively common in the last few years.

None of this was necessary or inevitableâall it would take is for local governments to fulfill their responsibility to protect the First Amendment rights of all Americans.

But, instead, local governments seem to be looking at Charlottesville not as a warning, but as a model. In Portland OR, Antifa practically have the run of the city. Recently they harassed motorists while blocking the road and chasing down those who refused to follow their directions. [Antifa protesters block Portland traffic, nearly start riot during Patrick Kimmons vigil, by Scott Morefield, Daily Caller, October 8, 2018] 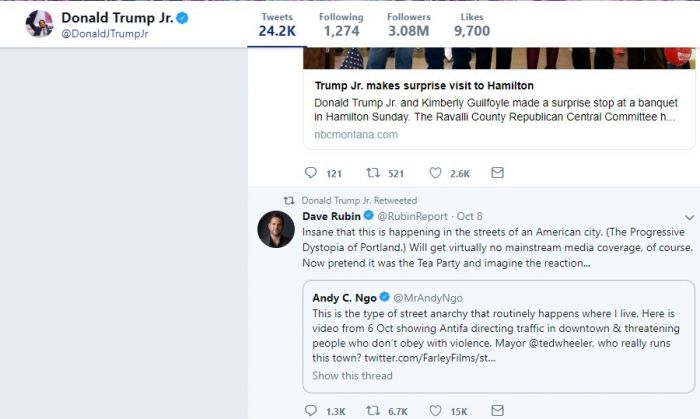 Note that, unlike the Charlottesville Unite The Right demonstrators, who were shut down by the local government and pushed into the clutches of Antifa, the masked Antifa demonstrators in Portland did not bother to obtain a permit.

Lawlessness begets lawlessness. Not surprisingly, a rally by the group Patriot Prayer, joined by members of the Proud Boys, once again degenerated into a street brawl. The protest was billed as a âFlash March for Law and Order,â but, once again, police did nothing to maintain law and order. [Police probe brawl of rightist, leftist Oregon protesters, Associated Press, October 14, 2018]

Portland mayor Wheeler has responded by calling for new police powers to curtail violence. City commissioners have misgivings, claiming that they may curtail free speech rights. But, typically, itâs clear that these commissioners are only concerned about the free speech rights of Antifaânot of patriot protesters. [Portland City Commissioners, Surprised By Mayorâs Proposed Crackdown On Protest Violence, Call For More Public Process, by Katie Shepherd, Willamette Week, October 16, 2018]

Consider the Orwellian comments of city commissioner Chloe Eudaly, a Leftist radical who has also been using taxpayer funds to prevent immigrants from being deported. She calls herself a âstrong advocate for freedom of speech, expression, and assembly.â But at the same time she declares that âalthough our policies must be content-neutral, it is far-right extremists and hate groups who are necessitating these measures.â

Maybe one could argue that right-wing protesters do come prepared for violence. But it is Antifa who make that preparation necessary. After all, the stated aim of Antifa is to use violent tactics in order to deny groups they donât like a platform.

And it was. Independent journalist Paul Miller testified that he was attacked after the meeting by Antifa, who âtried to kill meâ and âwere out there for the only purpose to hurt peopleâ. [Proud Boys Fight In NYC: Man Attacked, Robbed Says Antifa âTried To Kill Me,â by ML Nestel, Newsweek, October 15, 2018]

But the Proud Boys have borne the brunt of law enforcement efforts, with nine of their members now sought âon riot and attempted assault chargesâ compared to only three âanti-fascist protestersâ. [Police Seek 9 Proud Boys Supporters on Riot Charges After Brawls With Antifa , by Ashley Southall, New York Times, October 15, 2018] Self-defense is being criminalized and even calling the police risks inspiring a journalist crusade to destroy you

The plain fact is that, nearly two years into the Trump Administration, the presidentâs voters enjoy far less freedom and safety than they did before he took office.

Itâs good that the Republican Party is recognizing the radical left as a âmob.â

But talk is cheap. Attorney General Jeff Sessions should give Cuomo what he inadvertently asked for: a federal investigation into Antifa, a group that is overtly based around denying Americans their First Amendment rights through violence.