[Excerpted from Chapter 14 of Wild Life: Adventures of an Evolutionary Biologist by Prof. Robert Trivers.]

The low point in my relationship with Jamaica came fairly recently.

In 2007 I won the Crafoord Prize from the Swedish Royal Society. It was worth $500,000. When it was announced in the local Jamaican newspaper, I knew immediately that I had a brand new problem on the island. Although the paper had gotten most of the details wrong, including having me as a Jamaican who had migrated to the U.S. to study lizards, it got the sum of money I had been awarded correct. Most people downgraded it in their mind to US$5000 or its Jamaican equivalent, US$10,000, but even this was a large enough sum that, were I stupid enough to store it at home, my place would be well worth robbing. 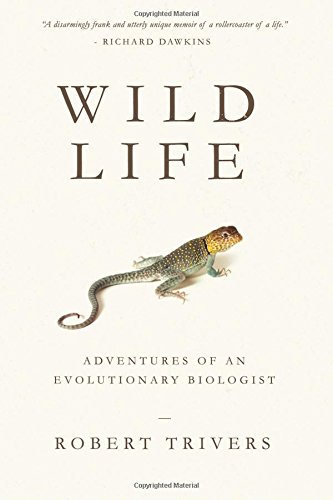 Sure enough, in the spring of 2008 I returned to my home from a local bar to a most unwelcome experience. It was ten thirty at night. Luckily, I had been in the bar with my computer, working on my self-deception book (Folly of Fools) because I preferred writing surrounded by company to writing alone. This meant that I had only been smoking and drinking very modestly, and this may have helped saved my life.

I unlocked the door to my bedroom, turned on the lights, opened the windows for fresh air, and left the bedroom door wide open as usual. Still feeling strong of mind and body, I decided to pack for my trip to Montego Bay the next day. I was supposed to fly out of the country early the following morning, and if I pack the day before I still have the chance to remember what Iâve forgotten before itâs too late. Suddenly I had the uncomfortable feeling that I was not alone in my bedroom. I turned and saw two ugly young darkskinned men in their twenties just inside the room. My thoughts must have raced because I remember thinking very quickly â where am I? In China? In some warp in the space-time continuum? No. Had I forgotten an appointment, as I often do? No â since when was I meeting with two butt-ugly young men in my bedroom at ten thirty at night?

Then I saw that one had a machete and the other a long knife. Ah ohh, I said to myself, bending back slightly â I know what this is, this is an armed robbery. Simultaneously I drew a long straight strong encased Brazilian sixinch blade knife from the right side of my pants, blade pointed toward the right testicle. As they spotted my knife their faces went from terror-inducing to terror-expressing, and they just managed to escape my room before I could corner either. In fact, I went straight at the cutlass man since he was the more vulnerable, within two feet of him he could do no more than slap me on my back, while I could slash him to death. The other was more âproblematic.â

I had never thought about this possibility in more than fifteen years living there. My house lay at the end of a long dirt driveway off of a one-way lane to the main road, some half a kilometer below. Since, as it turned out, they were both local boys, it hardly seemed credible (in retrospect) that I was meant to survive the robbery. They could not say, âWell, den, Marse Bob, see you in the square tomorrow.â Also it is a well-known fact of human psychology that the longer someone holds you under control, the crueler they become and the likelier to indulge in âthe final solution.â I always tell people, especially women under sexual attack, counter-attack at once and make a big noise to attract people â do not submit, and for Godâs sake do not be taken captive. Attack and scream to draw people, otherwise matters only get worse. Begging for mercy often merely excites the aggression it seeks to avert.

Once they scurried out the front door, I locked it behind them. Then the true terror began. Since I had not come running out with a gun to blast a few shots at them, they surmised correctly that I was unarmed. It also turned out that I only had the knife because someone had very foolishly locked my personal fighting machete into the tool shed out back. Now the men wanted to re-enter the house. They began with soft knocking and absurd entreaties such as, âLet us in, we are the police.â

Now I panicked. I had a huge one-floor house with numerous jalousie windows that could easily be entered by removing or smashing the glass panels. Then it would be two against one â as it was before â but without any element of surprise from me. That I had dozens of empty wine bottles escaped my notice entirely. Each was more dangerous than a knife, and in combination, throwing some broken bottles at close quarters and lunging with others, one could counter a machete. Having never envisioned this situation I had never planned for it, and that was a critical failing on my part.

I then made a most unwise decision. I abandoned my house in order to run out back and head down a hill full of old trees and bushes, nearly impenetrable and completely safe â if I could reach it. Alas, the boys were on that side of the house. Iâll never forget the sight of a machete held high, gleaming in the moonlight as they took off after me. I slipped and fell but my Filipino martial arts teachers (Arnis) had taught me what to do in that situation: I was to pretend I was riding a bicycle upside-down, while flashing my blade in every direction. The kicking feet divert your attacker while you attack.

Sure enough, it worked. I put my knife through the calf of the taller thief, who had landed closer to me than was wise, while I cut the shorter one across his throat as he leaned over to attack me â alas not deeply enough to kill him. Both ran off, and I returned to my house. But I was so terrified that I couldnât be certain if they had run away, as they had, or were lurking around for a second attack.

I had called the police early on, and they had promised to send a car. It was a scant ten-minute drive from the police station to my house, but it took them a full hour to reach my yard. When they finally did, they kept quiet at the edge until I came out on the porch at which point they apparently decided it was safe to enter because they turned on their police lights and approached.

One officer stayed in the vehicle the entire time, while the other one wanted to search my home on the basis of the blood trail leading out of it. I pointed out that the blood came from my own wound (wounded by myself as I thrashed my knife around upside down) so it merely tracked my movements. But I couldnât deter him from entering my home. I at least prevented him from entering my bedroom, which he was eager to do.

At no time did he search the outside premises, ask to see where the near-fatal encounter had occurred â where we would have found a slipper that I found in the morning, which indicated the youths came from nearby â nor did he walk around the house and notice the broken bathroom window where they had were preparing to enter right before I rushed out. The police drove off, and that was it.

I spent the night at a friendâs home. Mr. Cameron was a school principal with whom I had worked for many years. He had a licensed gun, and his wife tended to my wound, but I was well frightened by then and no amount of safety felt like enough. Later, I was to marvel that Iâd never thought to call Mr. Cameron while the incident was unfolding â far closer than the police, far more in the know, and far more on my side. That kind of blindness can kill you, but luckily, in this case, it didnât.

My assailants were arrested, but after the arrests the detective called to say that I owed him a computer in payment. I got ârahtid,â as we say in Jamaica â extremely angry. If the thieves donât get your money, the police will. I told him not to raise the issue with me again. He said it was for his daughter. I again told him not to raise the subject with me. So he sold the case out on the bottom side. The employer and pastor of one of the men and a friend of the other put together the $500 necessary to buy off two five-year prison felonies. When they were brought on for trial they looked around scared and asked, âDid the white man come?â The detective said no. He had in fact deprived me of the right to testify by never informing me of the court date. The charge was downgraded to a $130 fine for robbing a man in the public square by threatening him with a machete.

The other day I met a Jamaican of around my age who had just sold his home and a second house he owned in Ft. Lauderdale in order to retire to Jamaica. Ahh, I said, you are finally enjoying your dream of retiring to Jamaica! âNo,â he said, âIâm leaving this coming Thursday to return to Ft. Lauderdale. Here is way too dangerous.â After dark, he said, even when it was his wife or daughter knocking to ask entrance, he could never be sure there wasnât a man there too, holding a gun to her head as she was requesting entry.

Nobody is running me out of Jamaica â as Huey Newtonâs father put it, you have to take a killing but you donât have to take a beating. I have not yet taken a beating and hope I never will. As for a killing, I am seventy-two years old. If it comes, it comes. It would certainly cost me less in lost years than a lot of others Iâve known and continue to mourn, men like Be-be and G and Peter Tosh, women like Celestine, and many, many others.

Subscribe to All Robert Trivers Comments via RSS
PastClassics